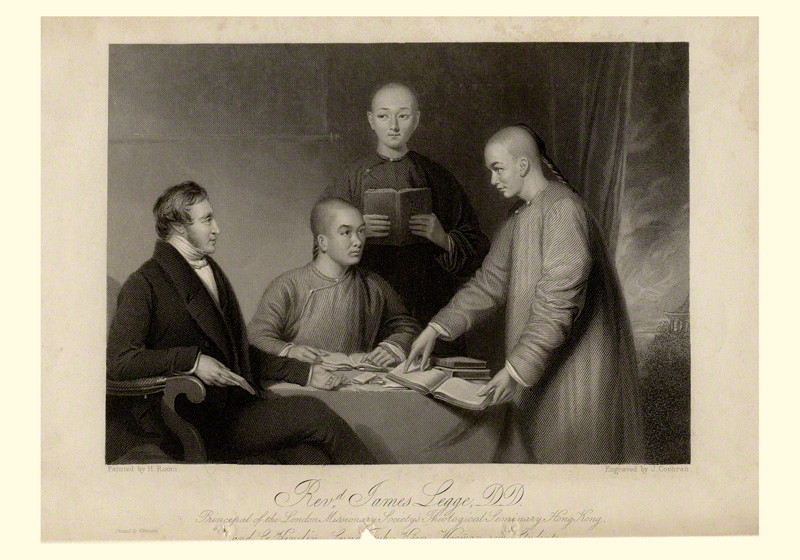 A nineteenth-century professor of Chinese has been honoured with the unveiling of a blue plaque on the wall of his former residence in North Oxford.

James Legge, a prominent Scottish sinologist and missionary, lived at 3 Keble Road from 1875 until his death in 1897.

In 1876, a year after his arrival in Oxford, Legge assumed the position of Chair of Chinese Language and Literature (today the Shaw Professor of Chinese), becoming the first holder of that post. Having spent 30 years in Hong Kong as a missionary, Legge, convinced of the need for missionaries in China to understand the nation’s culture, undertook the task of translating the Chinese classics into English. His epic translation helped to make Chinese literature accessible to western audiences for the first time and is still used as a standard work of reference today.

“While there are stories passed on within the family, it is with regret that so much of his letters, writings and personal effects were destroyed after his death.”

Christopher Legge, Legge’s great-grandson who was present for the unveiling of the blue plaque, said that “The family are very appreciative of the Oxfordshire Blue Plaque Board for this honour.” He added that it was regrettable that Legge’s work “has been overlooked in this country for too many years.”

“While there are stories passed on within the family, it is with regret that so much of his letters, writings and personal effects were destroyed after his death.”

Legge spent three years in charge of the Anglo-Chinese College (now Ying Wa College) in Malacca, Malaysia from 1839 before the college was moved to Hong Kong. Legge subsequently moved to Hong Kong himself, where he remained headmaster of the college until 1856. Christopher Legge said that he would be travelling to Hong Kong later this year to attend the college’s 200th anniversary celebrations. In addition to his headmastership, Legge was a church pastor for thirteen years and was briefly editor of the Chinese Serial Chinese-language newspaper.

At Oxford, Legge was something of a liberaliser, promoting a new multi-cultural curriculum and examination system and campaigning for religious toleration and women’s education. As a member of the Congregational Church, he was the first nonconformist to be made an Oxford professor. Eda Forbes, secretary of the Oxfordshire Blue Plaques Board, said that Legge’s career “epitomised” the change in social attitudes that gradually took place during the Victorian era.

The unveiling ceremony, which took place last Wednesday, was attended by representatives from the Chinese embassy and was followed by a reception at the Oxford University Chinese Centre.