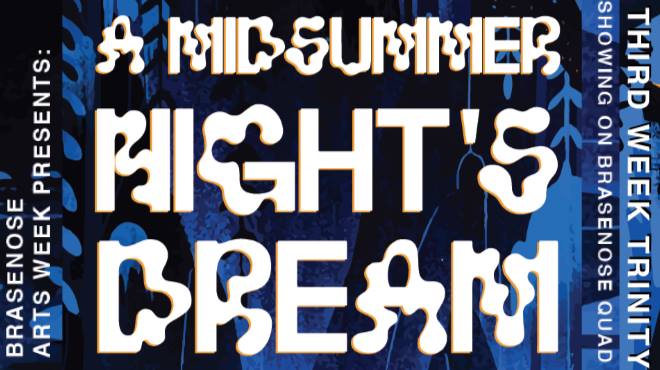 Brasenose presents ‘A Midsummer Night’s Dream’, a transfixing production of Shakespeare’s most magical tale, staged in the beautiful New Quad for the college’s annual Arts Week. The performance has an airy touch, and a sense of genuine enjoyment underlies the play through the boundless energy of some astoundingly good actors, who shift seamlessly from scene to scene weaving remarkable individuality into some of Shakespeare’s best known characters.

The performance has an airy touch, and a sense of genuine enjoyment underlies the play through the boundless energy of some astoundingly good actors

The production combines amateurish charm with striking professionalism. There is occasional hesitancy with lines and the scenery is bare minimal – but quirky features ranging from the playlist (the fairies frolic to Mungo Jerry’s ‘In the Summertime’) to the costumes, comprising mustard yellow dresses and ivy crowns for the fairies and collared shirts for the Athenians, capture a liberating bohemianism that jauntily sets the play apart from other performances.

Many of the actors are exceptionally able, including Hannah Taylor who steals the show as Helena: the caustic personality she artfully injects into her role as a scathing and lascivious lover (rather than the often favoured brooding melancholic) sees the audience stirring at her every entrance – some of the play’s most convincing moments are the dialogues between herself and the initially disenchanted Demetrius. Mention must also go to the supporting cast including Vishal Kumar’s Snout, whose surly Wall carries the earthy spirit of the Mechanicals, as well as the fairies Peaseblossom and Cobweb who have the audience in stitches with their horrified cringing at Titania’s salacious advances to Bottom. Bottom, played by Ali Johnston, fuels the show’s energy with his swaggering conceit and buoyant pomposity, and perhaps the most hilarious scene is in the play is that in which he familiarises himself with the luxuries of the fairy royalty, making obstreperous demands of Peaseblossom and Cobweb under the infatuated patronage of doting Titania.

A defining feature of the production is its handling of gender, with actresses taking the roles of Egeus and Lysander. Sian Hale and Libby Taylor handle the parts well, but unfortunately the production is an example of why changing the genders of Shakespeare’s characters can be problematic. There is a reason why Shakespeare made Egeus Hermia’s father and not her mother, and why Lysander is a man and Hermia a woman; the gender dynamics in ‘A Midsummer Night’s Dream’ are somewhat sinister, and balance out the silliness of the play. Through Theseus’s exhibitive conquest of Hippolyta, Egeus’s authority over Hermia’s life and death, Demetrius’s appropriative claim to Hermia and even Lysander’s understated forcefulness, Shakespeare adds essential gravitas to what would otherwise be a farce, and the claustrophobic power of the three men over Hermia also balances out Helena’s sometimes shocking pursuance of Demetrius.

There is even a convincing argument that Oedipal forces are at work- that Hermia turns to Lysander in desperation to escape her overbearingly patriarchal father, only to find that excessively persistent Lysander is similarly chauvinistic. Turning Egeus into a mother and Lysander into a lesbian lover unfortunately neutralises this fractious power struggle between men and women, which for me compromises some of the play’s power – and although commendable in many ways, the subtlety of the production’s gender-bending makes the changes confusing; I did not realise that Lysander is supposed to be a woman until after the interval. I also would have liked to have seen a more clear direction of intention – If Shakespeare’s comment on patriarchy is to be crossed out, is the performance instead highlighting the pressures women place on each other, or is the focus on a generational divide? If so, how are Demetrius and Egeus united?

although commendable in many ways, the subtlety of the production’s gender-bending makes the changes confusing

I want to emphasize however that the issue with gender does not detract from a really stunning performance; what has stayed with me more than anything else is the genuine enthusiasm of the cast. Their enjoyment is contagious and the audience is rapidly caught up and borne along in the vibrant swell of ribald humour and swaying passions, creating an unforgettable extravaganza celebrating imagination, magic, love, and laughter.