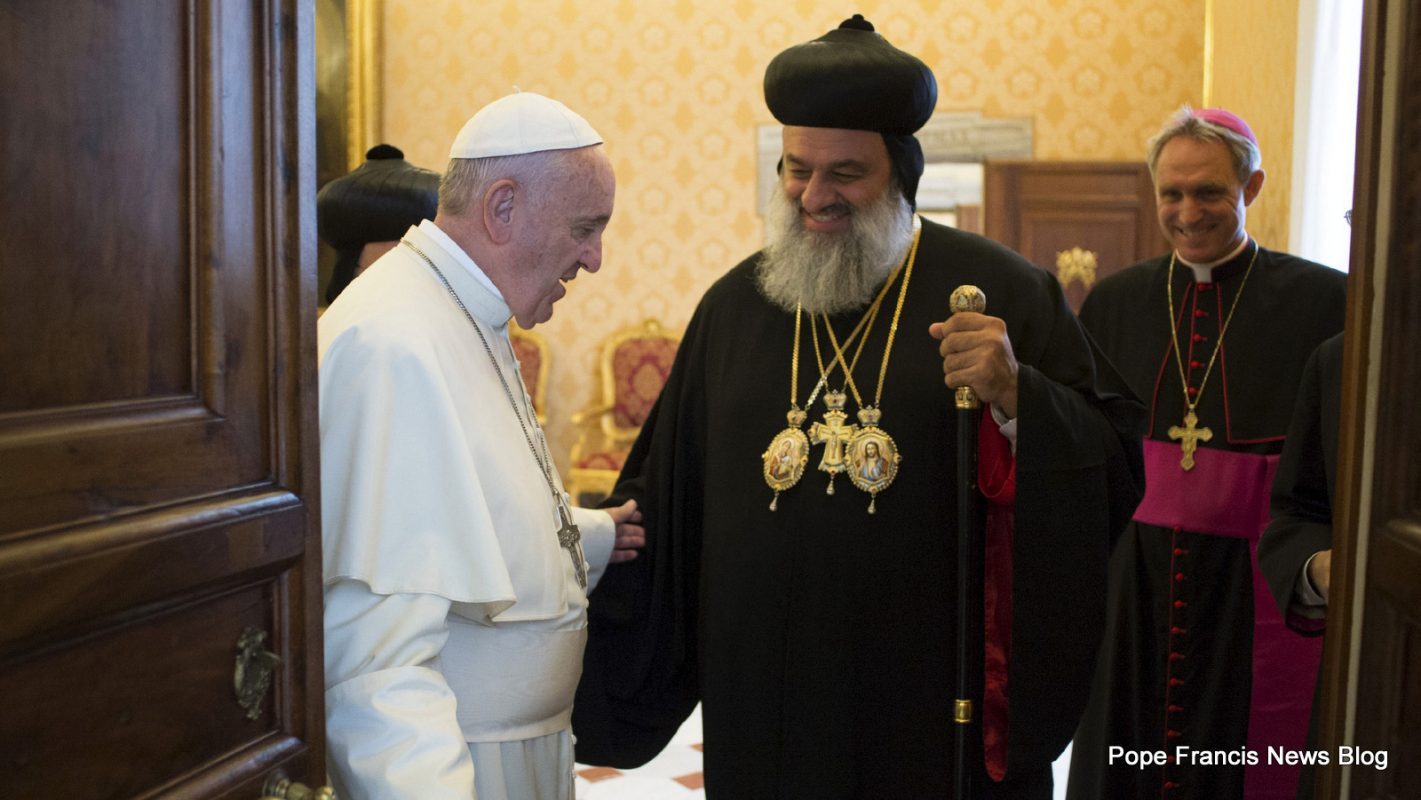 Eldhorajan92 Pope Francis greets Mor Ignatius Aphrem II, Patriarch of Antioch and all the East and Supreme Head of the Universal Syrian Orthodox Church, as he arrives for a private audience at the Vatian, Friday, June 19, 2015. (L'Osservatore Romano/Pool Photo via AP)
Features
·20th May 2018

The limits of Christian ecumenism

Christian unity is something that I have been particularly thankful for these past few years. It’s an incredible joy to realise that when I meet with my brothers and sisters in the faith – be it in a coffee shop, lecture hall or church building – I find a group of people with whom I share more than with my closest non-believing family member.

When I meet with my (admittedly quite student-oriented) church in Oxford, I find myself amongst this eclectic mix of people from different countries, cities, departments and colleges. Chemists sit next to Historians, rowers next to chess players, and Star Trek Society members next to… well anyone really. I know that I could go to any country in the world and find seemingly disparate groups of people meeting like this, whether publicly in old stone buildings and converted warehouses, or secretly in Somalian houses and North Korean labour camps. And further, if all is well, I know I can find the same warm and familial welcome the world over.

Christians around the world are united by their common faith in the man Jesus.

What brings me the most joy, however, is the source of unity which binds me, a 20 year-old Oxford student, with a bank manager in Nigeria or a pensioner in Singapore. Hundreds of millions of Christians around the world, regardless of age, race, class, job or language, are united by their common faith in the man Jesus, who was also God, who lived a sinless life, died a horrific death on a cross and yet rose from death to proclaim His victory over it. Beforehand, we were united in having turned away from the loving God who made us. But in an amazing and undeserved act of grace, that same loving God sent His Son to bear the punishment for our sins, so that through trusting in what Jesus did, we might be given none of what we deserve, and everything that He did. We live under a King, united into a Kingdom of life that pays no heed to borders; but more than that, we live as a family, united by our adoption by God to be His children. This is the true, invisible Church.

This being said, how does this good news relate to modern ecumenism (cooperation between denominations)?

Firstly, I’m not saying that denominations aren’t important: if anything they remind me of the value of truth.  From the first century, Christians have been encouraged to “contend for the faith that was once for all entrusted to God’s holy people” (Jude 3b, NIV), which is why some secondary issues – such as how churches are governed – see people organising into different groups. This is possible because of resources, numbers, and religious freedom here in the UK. It stems from a desire to honour God to the best of our ability in those areas on which the Bible is slightly less clear than it is on the fundamental truths about Jesus. Those core truths form the bedrock of historic Christianity, and thus enable doctrinal differences within one united faith. The Church in parts of the world where Christians are persecuted does not have these opportunities, but it remains united in Christ.

I’m cautious about ecumenism because, honestly, most of the times I’ve heard the word used it has referred to people talking past each other. Where true unity exists – around the fundamental truths of who Jesus is, what He did for us and how that makes us right with God – we can truly unite to share the faith that we all hold to with others who are in desperate need of it. Christians are free to make up their own minds on secondary issues using what the Bible says. This happens in Oxford: Christians who might call themselves Anglican, Baptist, Non-Denominational or Presbyterian unite to share the good news of Jesus with their city, with no hint of the word ecumenism. There is acknowledgement and loving debate about differences (because we are passionate about the truth), but unity in the proclamation of the hope Jesus brings.

Where disagreements interfere with more fundamental issues, truths that we believe the Bible holds as indisputable (such as the need for a Christian to turn from their sin, or the sufficiency of Jesus’ death), the same degree of unity is not possible if we are to be honest with each other. Nevertheless, we can still unite in living as Christ commands us, loving our neighbours and seeking an end to injustice.

It is because I value truth that I am cautious about ecumenism: Christians must value, strive for and celebrate unity, but this unity must be unity around the truth. If we sacrifice truth to promote ecumenism, such unity is no unity at all.