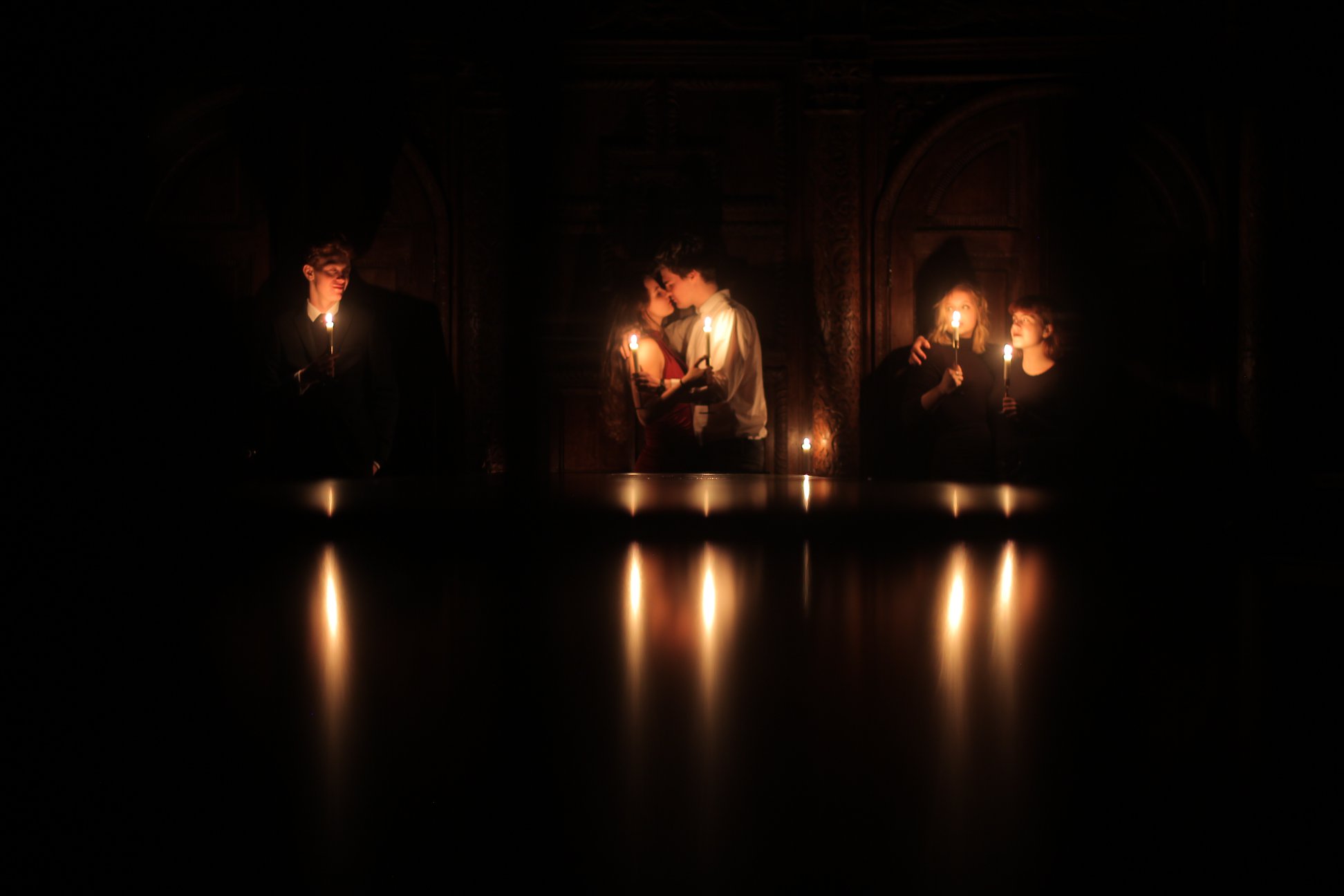 Stepping into the shadows of Jesus College’s candlelit hall on a sunny Saturday afternoon, the audience find themselves plunged into the equally shadowy world of 17th century Italy, the setting of Webster’s revenge-tragedy The White Devil. Vittoria Corombona, passionately played by Sophie Claypole, falls in love with the Duke of Bracciano (Basil Bowdler) and in doing so commits a fatal transgression that over the course of the play will lay bare the virulent misogyny and unscrupulous ambition of early modern society.

It is easy to draw a comparison with Shakespeare’s Othello, written less than ten years earlier: here too misogynistic hatred directed at an adulterous woman is the driving force of the play, manipulated by a scheming Iago-esque courtier, Flamineo (Kate Knight), who pulls the strings with the aid of some dastardly interior monologues. The plot twists and turns across two acts packed with adultery, murder, revenge, scheming and back-stabbing, before finally ending with a bang and pile of bodies four-deep. The production is certainly not afraid to indulge in the more visceral aspects of Webster’s drama: racy embraces between Vittoria and Bracciano are the counterpoint to a series of bloody murders each more gory than the last, ghostly visitations, wails of grief and a final desperate suicide pact. Stand-out moments include the sinister death of Bracciano, poisoned at the command of the Duke of Florence (Joshua Portway) seeking vengeance for the murder of his sister; Basil Bowdler’s captivating performance of a man raving mad in his dying moments makes it difficult to look away. An equally haunting scene is the maternal grief of Cornelia (Maddy Piggott): wandering onto the stage in a manner reminiscent of Ophelia carrying the body of her murdered son, Piggott sings a haunting lament that sends chills down the spine.

The production is certainly not afraid to indulge in the more visceral aspects of Webster’s drama: racy embraces between Vittoria and Bracciano are the counterpoint to a series of bloody murders each more gory than the last

The production’s real triumph is its ability to deliver these knockout moments of gory melodrama without losing sight of the play’s moral core: an unflinching exposition of the violent misogyny of a man’s world. In the Italian court, intended by Webster as a mirror held up to his own society, women are mere pawns in the power politics of the rich and powerful. As Isabella (Nancy Case), scorned by her unloving and adulterous husband Bracciano, laments: “O that I were a man, or that I had power to execute my apprehended wishes.” This female powerlessness reaches its pinnacle when Vittoria is put on trial for adultery, in a riveting scene which finds the corrupt Cardinal Monticelso pitted against the pride and defiance of Sophie Claypole’s Vittoria. Surrounded by onlookers, the audience likewise can’t look away as a woman’s private misdemeanour is transfigured into public sin: a sin so great as to merit a comparison with Eve. As the Cardinal, masterfully played, booms: “Were there a second paradise to lose, this devil would betray it.” In the eyes of society Vittoria may well be a devil disguised in white, yet we are left wondering if the white robes of the papacy may not hide a truer White Devil.

The production’s real triumph is its ability to deliver these knockout moments of gory melodrama without losing sight of the play’s moral core: an unflinching exposition of the violent misogyny of a man’s world.

Undoubtedly the greatest strength of the production is its unique reconstruction of authentic early modern indoor staging. The White Devil was written in 1612, just a year before Jesus Hall was constructed, and the production offers the audience a rare opportunity to experience Webster as it was intended to be seen. A particularly nice touch is the use of the hall’s balcony, which draws the audience’s eye upwards. The production’s striking use of candles is a great success, second only to the success of convincing Jesus College to allow students to wield naked flame in its wooden hall. The candles illuminate the actors yet leave much in shadow in a visually arresting interplay of light and dark that is suggestive of the moral duplicity that gives the play its name.

Admittedly, this is no short and sharp production. With a running time of over three hours the White Devil compromises its more powerful moments with lapses in vitality; while the dialogue was always compellingly delivered by the cast, this production may well have benefited from cutting some of the lengthier speeches. Nevertheless, The White Devil was clearly a labour of love for its director and cast and one that certainly paid off.

Woo-hoo for Much Ado