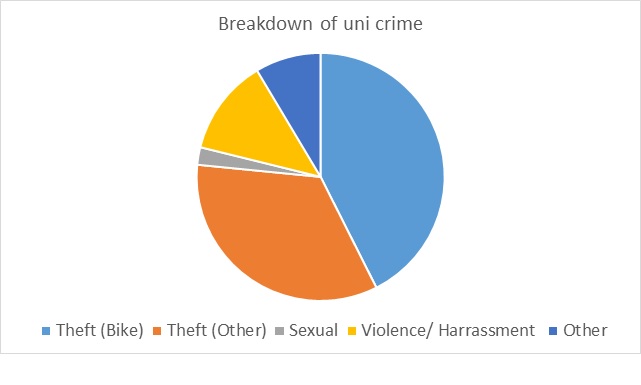 There were 362 criminal incidents recorded on Oxford University owned-property in the last academic year, figures obtained by The Oxford Student reveal.

The statistics, provided by the Thames Valley Police in response to a Freedom of Information request, detail the number, nature, and dates of all offences that took place on property owned by the university and its colleges between the 1st October 2016 and 1st October 2017.

A spokesperson for Oxford University Security Services said that not all crimes are reported to the police, and thus the actual total is likely to be higher.

They stressed, however, that in comparison to other universities and cities crime on campus in Oxford is “very low”.

There were a number of occurrences of serious crimes such as rape, arson, and assault. By far the most common crime, however, was bike theft, which accounted 149, or 41%, of the crimes recorded.

Most thefts were successful – there were only 4 cases of attempted burglary, and 29 successful cases.

A number of sexual offences were also recorded – three cases of sexual assault (two against men and one against a woman), and two cases of rape of a female, as well as one case of recorded rape, where the “victim (or third party acting on their behalf) has not confirmed the offence or cannot be traced”.

There was one incidence of stalking involving serious alarm/distress and one of voyeurism, defined as “observing or recording a private act for sexual gratification”.

Overall, sexual offences accounted for just over 2% of recorded crime.

Violent crime accounted for a further 4% of incidents: there were 8 cases of assault occasioning actual bodily harm, 5 of common assault and battery, and 1 of affray.

There were nine cases of criminal damage to dwellings, vehicles, and university buildings, and only three of drug possession – one of cannabis and two of MDMA.

Also recorded was one incidence of “Immigration”. A spokesperson for Oxford University Security Services said they were not aware that any event matching this description had occurred; they stressed, however, that this might be due to the fact that the colleges and departments are not obligated to report all crimes to them.

They attributed the university’s “low” crime rate to a number of factors, including “ongoing work” performed by the Security Services, the university’s location in the city centre (one of Oxford’s safest areas), and the partnership between the university, the police, the council, and other emergency services.

The Security Services’ main concern, they said, is bike theft. They highlighted that “a lot of work” goes into informing first years at the Freshers’ Fair and re-educating current students on its dangers and bike security.

They pointed out that rented bikes are cheap and easy to use, and do not entail the risk of “having your heart broken” if your own bike is stolen.

According to the Thames Valley Police, the crime rate in Oxford in general is “about the same as the average crime rate across similar areas”. The English Indices of Deprivation 2015 note that it has decreased since 2010.

Six of Oxford’s 83 neighbourhoods, however, have crime levels that are in the top 10% nationally.

There have been a number of attacks on university students in recent years. Only earlier this month  there were two separate attacks in South Parks targeting two female Oxford Brookes students.