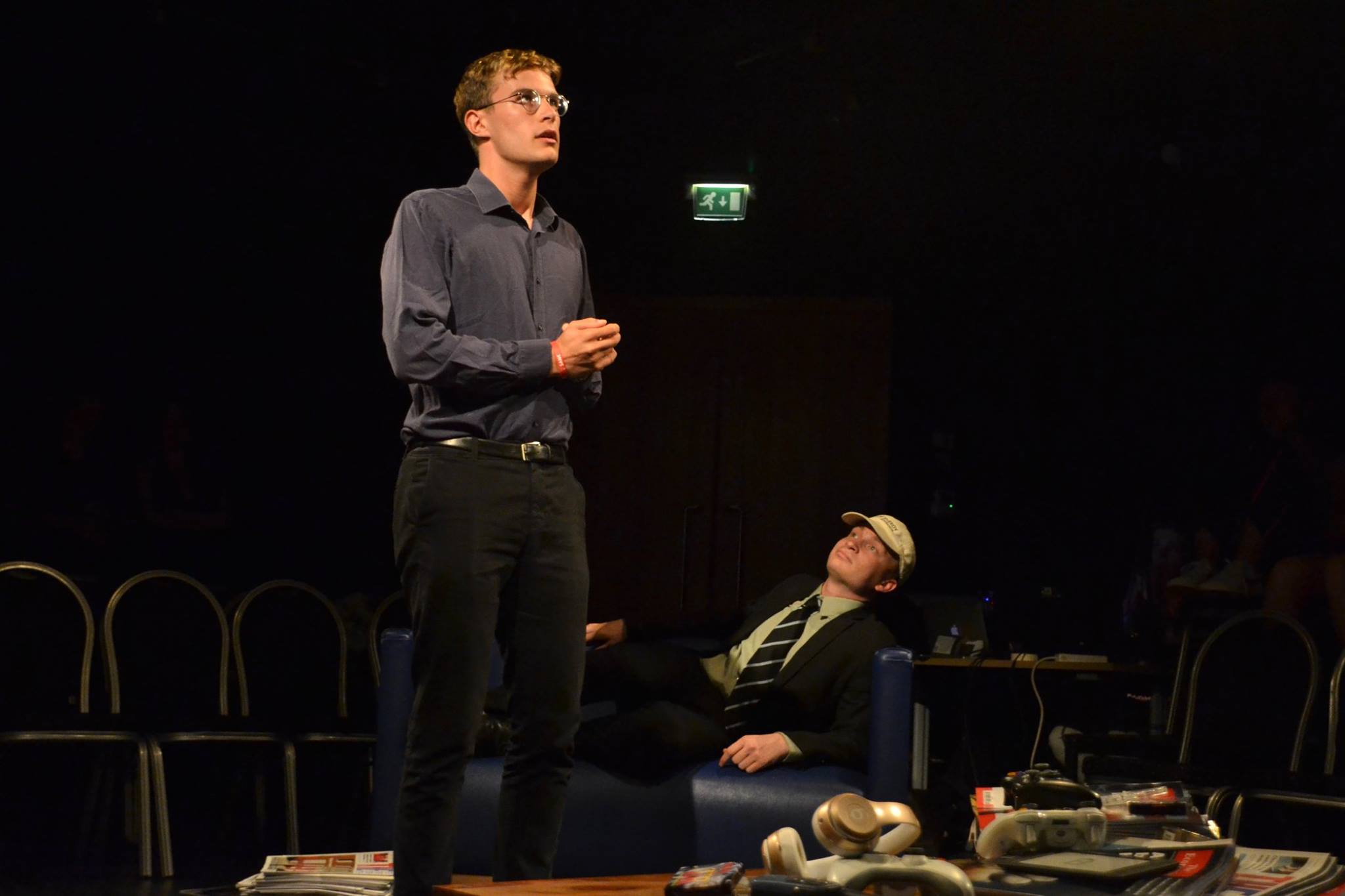 It is difficult to fault Lucy Kirkwood’s NSFW, a play that probes the depths of misogyny with an astute awareness of the painful sexism that journalism perpetuates, but also of the human action behind it. TheatreGoose’s production of the show at the Pilch treats its subject with flawlessly executed precision, wit and sensitivity, unpeeling layers of misogyny in a way that both humanises those involved and makes us painfully aware of how close we all are to this uncomfortable reality, brought to light especially by references to the Suffragette movement.

Divided into 2 parts, the play opens with an office filled with beer cans, sports paraphernalia and censored magazine covers gracing the back wall. It is clear that we have found ourselves in the headquarters of a lads’ mag, and from the start, the plot explores the nuances of different kinds of sexism, both within the office and in the culture that this particular office creates outside of it. In the workings of the office environment, we see Charlotte (Lucy McIlgorm), the only woman in the office, handling the condescension-masked-in-kindness of her boss Aidan (Cameron Spain) as well as the upfront brash laddishness of her colleague Rupert (Alex Rugman). In an ethically dubious job that she cannot afford to leave, our attention is drawn to the reality that sucks people into this kind of work; a reality made all too tangible when Charlotte speaks of her own Oxford education.

Discomfort is brought to its climax when Aidan has to confront the father of the girl who the magazine, unknowing she was underage, printed on its front cover. As the pitiful figure of Mr Bradshaw (Tom Mackie) meets Aidan’s manipulation, a vast array of gender issues unfold beneath the surface. The tension of two men arguing over what lines can and cannot be crossed in regards to public portrayals of female bodies is heightened by the presence of a silent, watchful Charlotte. The constant references to their daughters poignantly hearkens back to the way that men are often invoked in conversations about sexism only when it relates to their female relatives, as though there were a real division between the personal lives of women we know and the nameless bodies in magazines. Charlotte’s silence meets Aidan’s claim that such women want to be in these publications, pointing to the murky, often ambivalent nature of female agency in the midst of the fracas.

The tension of two men arguing over what lines can and cannot be crossed in regards to public portrayals of female bodies is heightened by the presence of a silent, watchful Charlotte

As a woman in the audience, I found that the second half was more difficult to digest in the best possible way, for it brought to light a crucial element often missed out on in discussions about misogyny; that of the hatred that women spread among themselves. The lads’ mag office is now home of Electra (a wonderfully Freudian choice of name if there ever was one), a women’s magazine spearheaded by Miranda (Abby McCann) who saunters up and down the stage trying to convince interviewee Sam (George Cobb) of the kooky, fun and ‘feminist’ nature of the office. Yet as we see more and more that the agenda of the magazine is to build up its readers by tearing other women down, we are brought close yet again to an uncomfortable reality, one in which women themselves can fuel misogyny through hateful scrutiny of one another.

The execution of the production was a well-tuned operation. The performance was truly enjoyable to watch not just because it did not shy away from difficult topics, but also because it was simply genuinely funny. Charlotte’s sharp quips and Sam’s affability created a lovely balance of personalities on stage, providing well-timed relief from heavier moments. The energy on stage flowed continuously throughout both halves, ensuring that this was rarely a sombre affair. Particularly notable was McCann’s performance, as she nailed the desperation of a middle-aged woman completely misconstruing feminism perfectly. One could not help but chuckle at Miranda’s attempts to stay hip, relevant and in control, convinced of her own authority and zaniness whilst completely missing the point of a feminist agenda. There was wonderful attention to detail in the staging, and the framing of the show with a video of the 1913 Epsom derby at the start and Oprah Winfrey’s Golden Globes speech at the end rounded it off powerfully.

The performance was truly enjoyable to watch not just because it did not shy away from difficult topics, but also because it was simply genuinely funny

Thought provoking and close to home for so many, NSFW treats its subject with care, while never sinking into condescension. Its energy and humour carry it through, proving that while perhaps not safe for work, it is a sound option to watch this week.