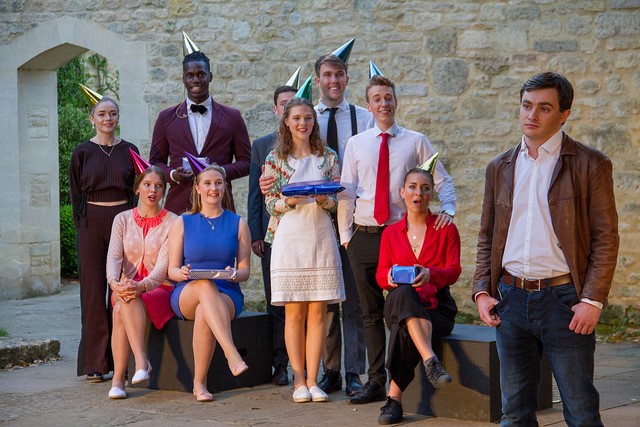 After the success of last year’s very enjoyable run of ‘Merrily We Roll Along’, I arrived at this year’s Eglesfield Music Society production of Stephen Sondheim’s ‘Company’ expecting great things – and I was not disappointed. In the sparse but pretty setting of the Nun’s Garden at The Queen’s College, a sense of excitement was building as the audience waited for the show to start; staring in anticipation at the stage filled only with 5 black boxes. The slight chill in the air did not overpower this sense of excitement, although it did become more invasive as the night went on – some people definitely had the right idea bringing thick jumpers and blankets! Despite this, the intimate lighting made for a cosy atmosphere as the sky began to darken. The outside setting also provided some subtly comic moments, particularly the solemn tolling of a distant bell in the city centre as Bobby asked “Are you ever sorry you got married?”.

The whole cast managed to maintain large, sickly-sweet smiles throughout the show

Despite some sound system and microphone difficulties, the balance between the band and cast was notably excellent throughout, with the strings carrying over the five reed parts, a large brass section and drum kit for most of the night. I could feel my own fingers becoming stiff with cold and was particularly impressed at how the strings managed produce a strong sound and consistent vibrato, given that there were long interludes in which the band was not playing. As well as the outdoor setting, musical director Donald Taylor told me that Sondheim’s music “presents a unique set of challenges. Particularly with Company, his motivic development and complexity of texture and harmony lead to an exciting but difficult score”. Undoubtedly, Taylor rose well to this challenge and maintained a consistently calm and controlled manner throughout the show, despite its length. There was also consistency in the acting and singing of the cast, who managed to maintain large, sickly-sweet smiles throughout the show. This was especially entertaining in the opening to the second half in which the cast donned boaters and canes and everyone managed to flawlessly sing and dance without sounding remotely out of breath!

The indisputable star of the show, however, has to be David Garrick who played the lead role, Bobby. Garrick has perfected a subtle, yet powerful vacant expression which he deployed brilliantly throughout many scenes in which his character had to endure the squabbles of his married friends. On a number of occasions, Garrick gave some amazingly moving performances, even managing to conjure up tears when necessary. His standout performance was “Being Alive”, an incredibly poignant and beautifully sung finale that left the audience in awe. Impressive performances were also given by Alex Buchanan and Gwenno Jones, who managed to keep impeccable control her of her intonation whilst pretending to be drunk remarkably realistically…

“Every year we put on a Sondheim musical outdoors in Queen’s, and we hope this tradition to continue for years to come” Maya Saxena, producer

Although the end to the musical is somewhat bittersweet (arguably more bitter than sweet), the performance left one with a sense of joy and warmth. The programme came with warnings about the plot and structure of the show being unclear, but this was not a problem thanks to the sustained professionalism of this production throughout the evening. Maya Saxena, the producer, noted that in preparations for the show, “What has been noticeable is the way the whole team has supported each other to make it all come together for opening night. Every year we put on a Sondheim musical outdoors in Queen’s, and we hope this tradition to continue for years to come”. This was definitely clear from an audience’s perspective and the hard work everyone had put into this this production resulted in a truly fabulous show.

Modest Mouse: strangers to themselves?

Frankly, it’s between rock and a hard piece

Live review: We Are Scientists at the Academy