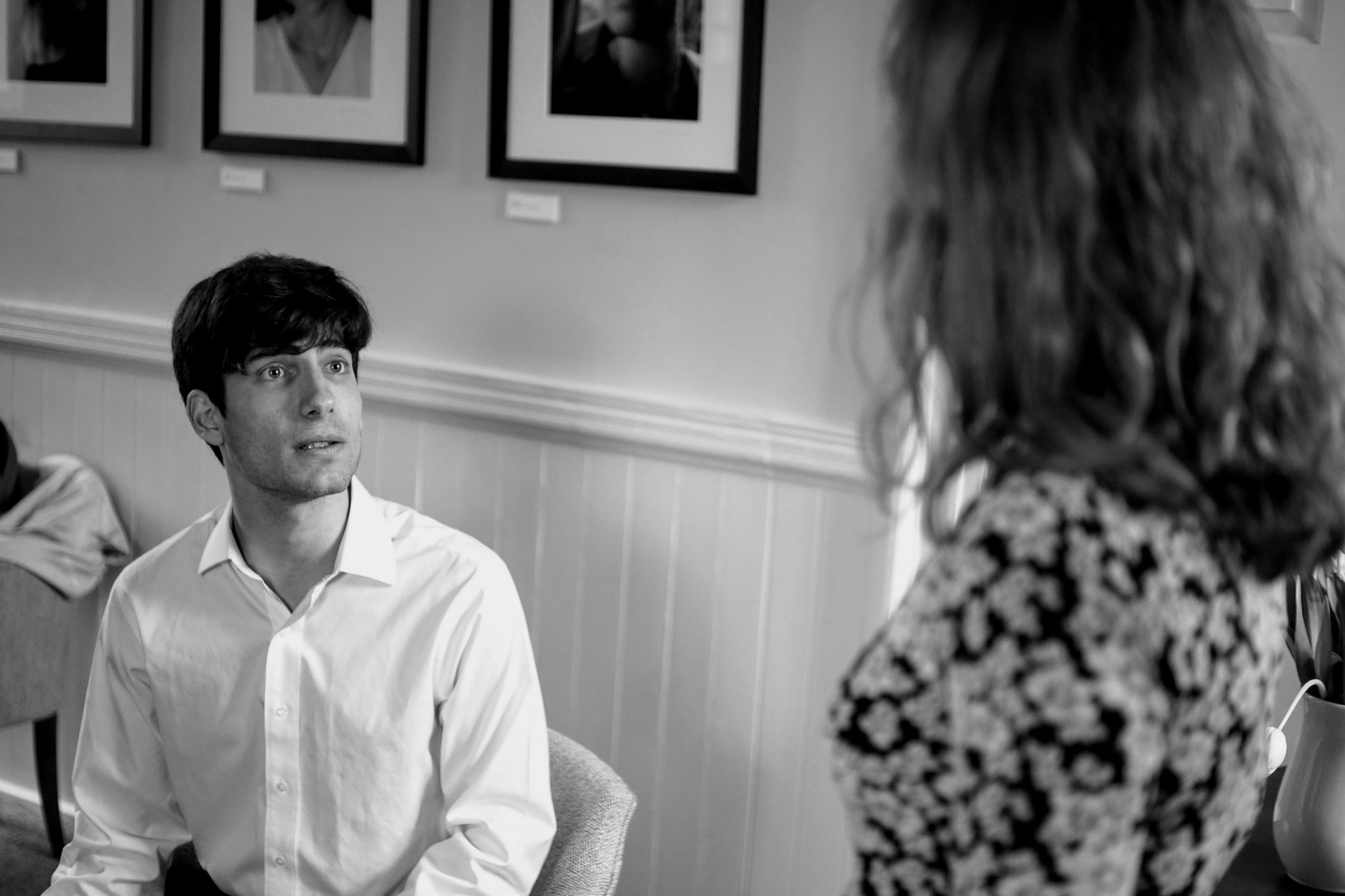 I must confess that before watching Der Process (The Trial), my knowledge of Kafka was limited to seeing the launch of Kafka’s Motorbike in Bridget Jones’s Diary and a brief conversation about the life of caterpillars in Metamorphosis. Hence, this dark and violent adaptation of Kafka’s novel Der Process came as a bit of a shock.

Der Process follows the haunting torture-like treatment of Josef K. (played with fantastic energy and verve by Oldysseas Myresiotis Alivertis) at the hands of the establishment. Put on trial without being given details of the charges against him, K faces the insurmountable challenge of keeping his sanity while those around him conduct a hearing to investigate his guilt for an unknown crime. By the end, K is broken but not defeated, drawing on all his powers to fight his case and keep his head, the audience can’t help but feel pity and disgust at his treatment. At over two hours long, even I felt the need to escape at the end of this torture fest as we saw K broken and tormented by the world around him. “Kafkaesque” really doesn’t do justice to the bizarre turn of events.

“Kafkaesque” really doesn’t do justice to the bizarre turn of events.

Justin Fehr’s direction is impeccable, with a lack of placing in geography or time making this a timeless production demonstrating the power of Kafka’s tale of suffering at the hands of the system. With Chris Jacobi and Emma Wood’s haunting choice of music, the chilling effect of Kafka’s story reverberated around the studio, with the power of the performances making this an exceptional evening of student theatre. As with most student productions, apart from the stylised movements in Green Eyes/The Parade and Medea last week, this production could have benefitted from more inventive scene changes to replace the rather drab fading of lights and rushed props replacements.

There were some great ensemble moments, particularly with the cast playing the defendants awaiting trial. The haunting music, along with the collective shaking and agitation added to the atmosphere of tension and fear as the play reached its climax in the second act. Standout performances were given by all members of the cast, a truly talented group of actors who brought Kafka’s story to life, who managed to keep me engaged despite not knowing a jot of German.

the chilling effect of Kafka’s story reverberated around the studio, with the power of the performances making this an exceptional evening of student theatre.

Louis Morris, as the sadistic Prügler and utterly crazed painter, Titorelli, gave a powerful performance. The scene with Prügler’s punishment of two of the “defendants” was demonstrative of Fehr’s excellent direction – every part of the BT space was used, making for a truly inventive staging. Ruth Eichinger and Monica Schroeder both gave faultless performances, truly engaging in Kafka’s absurdist horror story with oodles of energy. The power of the whole cast was extraordinary given that this was the opening night.

Alivertis’ physicality merits particular mention. Appearing on stage throughout the whole play, his ability to maintain such an intense performance, with a developing physicality from the initial accusation to his hunched-over struggle to maintain his identity, was truly exceptional. He was truly gripping.

Der Process was outstanding. With Green Eyes/The Parade, Medea, and now Der Process, Oxford’s Trinity drama scene is positively alight with talented actors and actresses who are delivering captivating performances. Presenting Kafka’s absurdist and dystopian tale of the torture-like mistreatment of individuals by the state, this company have achieved something brilliant. Undoubtedly a five-star production.

Der Process, the Oxford German Play, is running at the Burton Taylor Studio until Saturday of 6th week with subtitles in English.