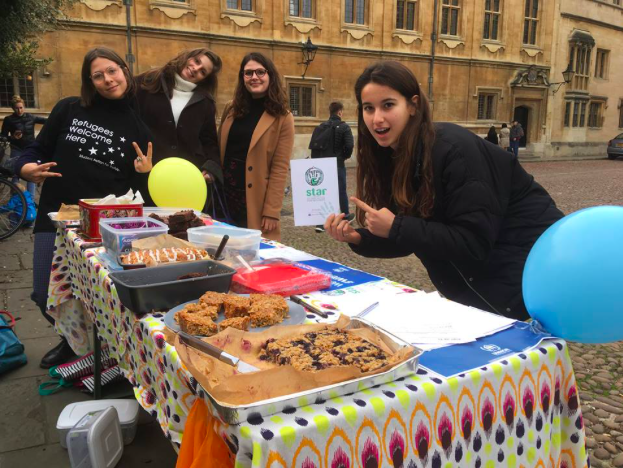 STAR: Bringing the fight for refugees to Oxford

From its very name, Student Action for Refugees (STAR) makes its objectives very clear – that of the empowerment and mobilisation of young people in local communities across the UK to address one of the most pressing crises in the world today: the refugee crisis. By hosting various volunteering, campaigning, and educational events – here in Oxford they have held everything from panel discussions to film screenings – STAR facilitates direct contact between students and various aid and awareness efforts. Profile sat down with Lydia Higman, a member of the NGO’s Oxford branch, to learn more about the work the group does as well as the issues they tackle.

What is STAR? Could you give us an overview of the kind of work you do, and the main mission of the group?

STAR is a student-led national charity that aims to make the UK a more welcoming place for refugees and asylum seekers. There are around 27,000 members of STAR across the UK, and we are the Oxford University branch. Our group is split into four main areas: fundraising, raising awareness, campaigning, and community based projects. In terms of fundraising, we recently matched a bid with Santander and received £2000. This will be spent exclusively on projects in the local refugee community, for example we will be collaborating with the Syrian Sisters (a group of Syrian refugee women in Oxford) to hold a cultural event. In terms of campaigning we support two main campaigns: the family reunion bill, to allow refugee children to sponsor their parents to come to the UK, and the equal access to higher education campaign. Raising awareness is another key area; we hold panel discussions, run pub quizzes, film screenings, and speaker events. In that sense, it is hard to give one definitive mission of the group as there are a variety of aspects.

What would you say has been the hardest part of getting your message out there, and raising engagement?

Perhaps one of the biggest challenges has been establishing a social media presence. This is something that I am not particularly versed in, but we had a fantastic communications officer last term (Louise Chegwidden) who really took us in the right direction, which is being continued by Maddie Slader. Of course, in order to get our messages out, we need people attending events, reading our posts, and engaging with our campaigns. Particularly in a university setting, this is really requires a strong presence on social media. At this stage we have nearly 1000 likes on Facebook, and a fairly substantial mailing list – which is very encouraging!

What would you say are the biggest, most pressing issues refugees face in 2018?

The refugee crisis is highly complex and varied, and I do not claim to have an expertise in global refugee issues. However, from my understanding, there are a variety of issues that refugees are currently facing: protracted conflict, human rights violations, the failure of states to actively respond, climate change, and access to education to name a few. To offer just one example, the influx of Rohingya refugees to Bangladesh is one of the largest and fastest-growing refugee crises in decades. Over 670,000 Rohingya refugees have fled targeted violence and human rights violations in Myanmar since August 2017. Refugees have settled in two main settlements, and are struggling under overstretched and limited services and resources. In the Cox’s Bazar region, where one of the densest refugee populations on the planet exists, the risk of disruption during the rainy season (April to October) is acute. In a sense, this crisis encapsulates many of the issues refugees are facing: access to resources, education, services, and the climate.

The UK is currently on target to match Cameron’s pledge to take in 20,000 Syrian refugees – yet seeking asylum is a different process. Refugees that enter the UK do so via schemes for vulnerable people, yet those seeking asylum must basically prove their refugee status to the government. The UK hosts less than 1% of the global refugee population, and just 3% of all asylum applications in the EU. Germany, France and Italy all received at least double the amount of applications. Seeking asylum is a particularly difficult process, and the Home Office have recently published a report stating that inspections are taking too long, and have found issues with the quality of decision making. Asylum seekers live off around £35 per week, and can exist in this period of uncertainty for well over six months. There are charities in place to deal with people in this situation, for example ‘Asylum Welcome’ in Oxford.

What has been the most interesting event you’ve held so far?

I think one of the most popular events we held was our exclusive screening of Ai WeiWei’s ‘Human Flow’. The documentary itself is so important in getting people to reassess the whole idea of mass movement; it provides the viewer with an idea of how vast, complex, and international this issue really is. I would also say our panel discussion on asylum detention; it addressed a more specific issue in great detail with excellent speakers.

You’ve conducted a lot of interviews with members of the public. What is the most surprising thing you’ve learnt about the public’s awareness of and engagement with the crisis?

The interviews we did in public were informative, and despite Oxford being a generally welcoming place, a lot of basic knowledge was lacking. Out of around 40 people we interviewed, perhaps 5 knew the difference between an asylum seeker and a refugee. We also had a trick question about where most refugees coming into the UK came from; a lot of people said ‘Poland’ out of the multiple choice. Of course, Polish people can’t be refugees because Poland is in the EU.

What are the biggest misconceptions people have about the refugee crisis?

I think perhaps the scale of the refugee crisis is a major misconception. The UNHCR state that there are currently 70 million people that are displaced in the world, 84% of which are hosted in developing countries. Europe has a population of roughly 500 million, and just 1 in 5 of refugees are hosted in Europe. So, when people talk about a ‘European’ refugee crisis, it is in fact more accurate and constructive to frame the idea of ‘crisis’ as outside Europe. In fact, Europe has the infrastructure, the relative economic stability, and international law to respond better. Becoming attached to the idea that all refugees are coming to Europe is misleading, and only by way of comparison with the refugee situation outside Europe can we see that the ‘crisis’ is global and distinctly extra-European.

What’s the most surprising thing you’ve learnt about the current crisis?

I think the failure of the UK government to provide refugee children with safe and legal passage to the UK has been the most shocking aspect. Last year alone, 6 children died trying to cross the border from Calais to the UK. The Dubs Amendment was put in place to ensure refugee children could safely seek asylum in the UK, and this has been disregarded. The government has failed in its commitment to uphold this humanitarian promise, and has compromised basic human rights to appease political consensus. For those who haven’t, watch ‘Calais Children: A case to answer’, directed by Sue Clayton – it is vital that politicians and the public alike address the cruelty inflicted on the children our government has neglected.

What does the future hold for STAR – what sorts of events and/or campaigns do you have planned?

In 7th week we are running a ‘disposable perspectives’ photography exhibition. This looks at a series of photographs taken by refugees in France, which were developed by a student and volunteer. It’s a powerful insight into the lives of refugees. I have been in correspondence with the UK representative for the UNHCR, Gonzalo Vargas Llosa. Next term we will be hosting an event with him, which will be absolutely fantastic!

The Equal Access campaign has been running since 2008 to ensure that people seeking refugee protection in the UK have equal access to higher education. STAR have been running the national campaign in partnership with the National Union of Students, and is supported by various other groups. As it stands, those waiting for a decision on their asylum protection, or who have been granted Humanitarian Protection or Discretionary Leave to Remain (DLR), do not have equal access to university. Shockingly, the policy states that they must pay international fees. The notion that someone fleeing war, torture, and persecution has the same intention to study in the UK as an international student is clearly wrong. The intention is to classify those seeking asylum as home students for fee purposes, to offer scholarships to cover study cost and maintenance, and to publicize the Equal Access policy so that prospective students are encouraged to apply. The Oxford campaign is organized by a small group of students who have established a fund from pledges made by the student body. Oxford is making progress towards centralizing the management of this scheme.

What are some changes you’d like to see happen on a university level, and on a government level?

Quite simply I think the government should be taking in more refugees. On a governmental level, I think huge reforms should be put in place to handle the asylum process more effectively, and detention should be given a week-two week maximum time limit. Sadly, I don’t expect any of these changes to come about anytime soon.

What can the average student do to help with the ongoing crisis?

The best thing that the average student can do is ensure they’re informed. There are a lot of volunteering opportunities available, and if you are interested in volunteering then send us an email and we will set you up. However, for the majority of students who have a variety of other commitments, the best thing to do is remain aware and keep up the discussion.

Where can students go/ what can they access in order to educate themselves about the issue?

Lots of information is out there, but it’s important to ensure that facts form basis of discussion. Check out the official UNHCR website, and I would recommend watching the high commissioner (Filippo Grandi) on YouTube – he gives a good overview. Some of the documentaries that have been made on this issue are really powerful. I would recommend Ai WeiWei’s ‘Human Flow’, and the ‘Exodus’ documentaries on the BBC. As said before, Sue Clayton’s ‘Calais Children: A Case to Answer’ is massively important, and on asylum detention I would recommend the BBC’s Panorama documentary. There are loads more out there to recommend, but they offer a good picture. I would suggest coming to STAR events of course – listen to experts on the issue, and be watchful of certain newspapers…