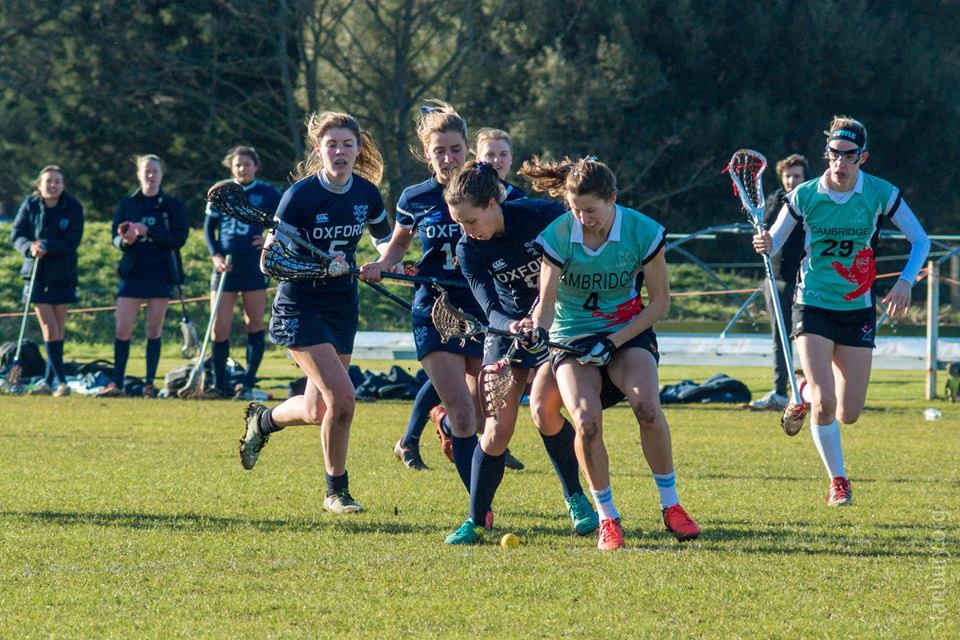 Pictured: Action from the Women’s Varsity lacrosse match from February 2018

I am walking through the University Parks beneath clear and deep blue sky, among trees of pine and sycamore, mottled oak and marvellous copper beech. There is a light breeze in the air and birdsong can be heard all around. I’m with Bella, co-captain of Oxford’s Mixed Lacrosse team. After I attended one of the Lacrosse taster sessions that are running throughout Trinity term, she has kindly offered to practice some throwing and catching with me.

We move onto the open grass. The sun is shining brightly as she hands me a lacrosse stick. It comprises is a long pole with a small and quite flat basket at its head in which the lacrosse ball sits. Aside from a gum shield, this is the only equipment I need.

Throwing and catching are as one might expect. Once I receive a ball, I’ve got to bring it into a cradle: this involves a particular arcing of the lacrosse stick, keeping the ball firmly in the stick’s head and ‘cradling’ it so that it’s much harder for an opponent to knock the ball from you.

Only against Cambridge during the Varsity matches, in which the Oxford managed three victories out of four, losing the mixed lacrosse match,  there is a special rule, Bella explains, called  checking; to ‘check’ someone is to use one’s own stick to knock the ball out of theirs in a controlled fashion. Shooting, on the other hand involves a more powerful and sweeping movement of the stick, whence the ball flies, hopefully, on its desired course!

Aside from technique, I’ve also learnt something about the sport’s history. Lacrosse originated several hundred years ago in what is now north eastern USA.  It was a game, so I’ve read, of deep spiritual involvement, played from sunrise to sunset sometimes with entire village, thousands of people; it served many purposes, religious and recreational. I also know that over the centuries its rules and form have changed greatly into the different types of lacrosse that are played today. One of these is mixed lacrosse, which is what Bella plays, and the one I’m most interested in.

Bella explains that until university, lacrosse mostly remains a sport played by all-girls’ schools (in the form of women’s lacrosse). As a lacrosse player for eight years, she notes how different it feels to play mixed lacrosse at university. The differences she speaks of reminds me of my own first impressions.

I found the men’s session to be certainly more intense, in a way which didn’t make me feel too comfortable; perhaps it reminded me of the often-pervading atmosphere at boys’ sports sessions in the past.