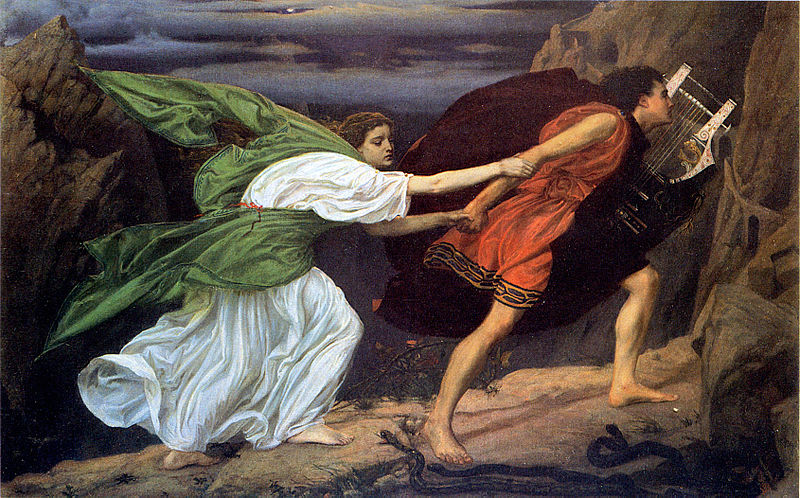 Why is a simple instruction often a matter of life or death?

Keep walking away, don’t look back. If you look back, your lover’s lost in hell for all eternity, or you’ll dissolve into a pillar of salt.

The principle is easy, but as both Orpheus (taking quotes from Book IV of Virgil’s Georgics, translated by A.S. Kline) and Lot’s wife prove, the reality is anything but. Conservative interpretations have suggested that Lot’s Wife’s backward glance at the dying cities of Sodom and Gomorrah was a moral warning against sin and corruption, denying God’s order and focusing on the past. Yet these explanations ignore the quintessentially human qualities of nostalgia and disobedience. Jesus tells the reader to “Remember Lot’s Wife” in Luke, yet we shouldn’t remember this unnamed woman as a moral allegory for sin, but rather for her relatable, flawed desire to look back upon the city where she has spent all her days.

Even as Sodom and Gomorrah fall, Lot’s wife cannot bear the thought of abandoning her fond memories of the area, and thus breaks the angel’s command to “Escape for thy life” and “look not behind thee…escape to the mountain, lest thou be consumed”. Rather than go on into the future with her family, she looks behind her and loses her life.

Interestingly, the Lot passage in ‘Genesis’ is the second shortest in all holy scripture, yet remains one of the most powerful. The poignant image as she steals a glimpse “at the place she had lived all her life” is full of pathos, particularly as she witnesses her family, friends and neighbours “being smashed and burned to death” by God before her eyes. The phrase “looked back” is repeated three times before Lot’s wife is tragically transformed into a pillar of salt. The angel’s single command cannot be followed, not because of vice or vanity, but because of a basic, painfully recognisable wistfulness to embrace an unreachable past.

In Greek mythology, Orpheus experiences a similarly tragic fate when he disobeys Hades’ one command not to turn around, which is made all the more painful by the reality that he was virtually on the threshold of the living world when he “stopped, turned, looked upon Eurydice his own once more” and views his already dissolving beloved.

Unlike Lot’s Wife, Hades does not punish Orpheus for his act, but the heartbroken man is nonetheless left to walk the world in despair at the loss of Eurydice. Although some have suggested that Orpheus’ action is born from a lack of trust in Hades’ promise, it’s more convincing that, just like Lot’s Wife, he turns as a result of the “sudden mad desire” of temptation, love and nostalgia for his wife. Surely, after charming all the gods with the brilliance of his music, Orpheus is capable of conquering his final challenge; but Hades achieves the final triumph through the hero’s desperate, last-second gaze upon his lover.

Professor David Heyd seems to suggest that the act of looking straight forward should be incredibly simple. He asserts:

“Looking back is a deadening act. It surely goes against the evolutionary imperative; if chased by a predator, run away as quickly as possible; any attempt to look back may cause one to waste time, maybe be hunted down”.

While Heyd’s survival perspective does have a clear element of truth, particularly in the case of running away from a burning city, it nonetheless ignores any factor of emotional or psychological attachment in favour of a linear, scientific approach to the human psyche.

The element of reverse psychology also plays an essential part in the choices of both individuals; the act of walking forward without turning back is simple, yet the express commands of both God and Hades to not commit this one basic act surely tap into a distinct desire to rebel. Even though Lot’s Wife doesn’t have a single word of dialogue, and the whole escaping scene only occupies a single verse, her one act nonetheless leaves a deep and lasting impression on the mind of the reader.

Likewise, Virgil’s narrator mourns Orpheus, wondering if even Hell might forgive such a recognisable lapse, although this forgiveness is never granted. In a similar fashion to Virgil’s Aeneas, distraught at losing his dear Creusa in the wreckage of Troy – who admittedly experiences his tragedy through destiny, and no fault of looking back – Orpheus is left pained and empty without his partner.

When we compare these ideas of looking back to modern philosophy, we can see Freud’s ‘Remembering, Repeating and Working Through’ (1914) eschews any ideas of remembering, and instead encourages the patient to use memories as a means only to move forward. Although memory is an essential part of the healing process, Freud treats the past as something to be processed and forced into present reality, not simply to be dwelt on.

His early follower Sandor Ferenczi, however, produced a far less confrontational and more empathetic method, taking the Orpheus myth as one of his primary influences. Playing the part of an allegorical musician, he would ease traumatised parents out of their anxiety by descending into their metaphorical “hells” and picking apart their problems in non-intrusive techniques such as using a gentle voice tone, which marked a distinct change to Freud’s emotionless, distanced methods of therapy. Despite Ferenczi’s maligned career, his ideas nonetheless remain powerful, and have likely influenced the more sympathetic approaches to the Orpheus legend as a tragedy of human temptation, and not simply a moral fable about the dangers of a lack of resolve.

So remember Lot’s Wife, not for her sin but her act of silent defiance. And think fondly about a lovelorn hero who lost everything at the last moment, all because of one wistful backwards gaze.

For at the very threshold of the day,

Heedless, alas! and vanquished of resolve,

He stopped, turned, looked upon Eurydice

His own once more. But even with the look,

Poured out was all his labour, broken the bond

Of that fell tyrant, and a crash was heard”