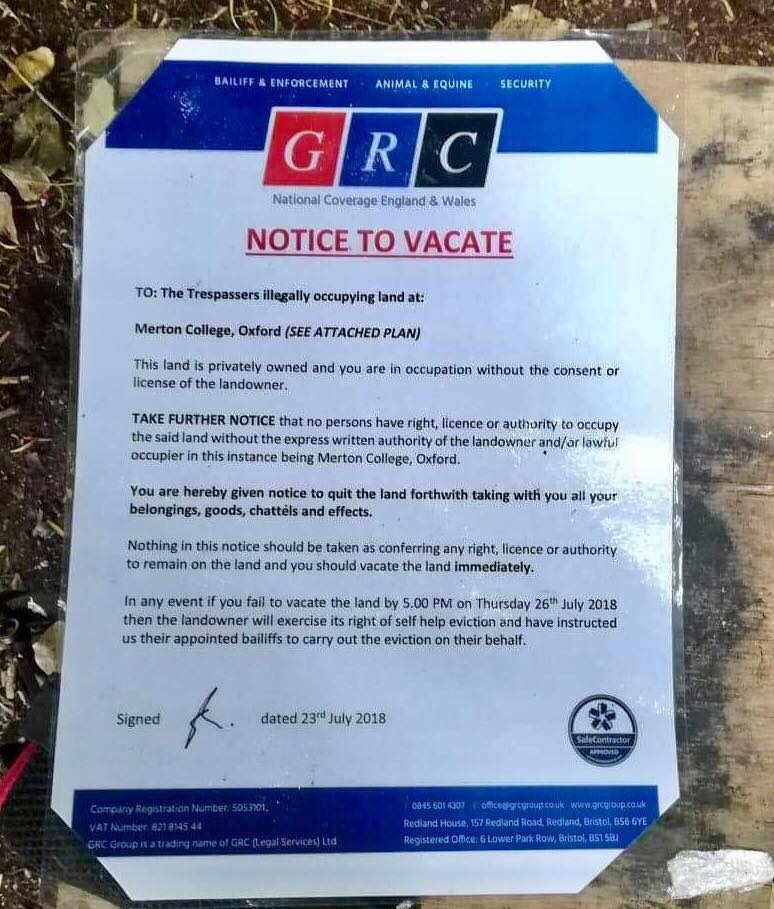 Today at 5pm, a number of homeless people are set to be evicted from a site owned by Merton College, Oxford.

The field, which is claimed to be overgrown and unused, has been a place several homeless people have been using as a place to sleep.

A photo of the sign has been posted on Facebook by Alex Kumar, chair of the On Your Doorstep Oxford SU homelessness campaign, which reads: “To: the trespassers illegally occupying land at Merton College, Oxford. “This land is privately owned and you are in occupation without the consent or license of the landowner

“Take further notice that no persons have right, license or authority to occupy the said land without the express written authority of the landowner and/or lawful occupier, in this instance being Merton College, Oxford.

“You are hereby being given notice to quit the land forthwith taking with you all your belongings, goods, chattels and effects.

“Nothing in this notice should be taken as conferring any right, license or authority to remain on the land and you should vacate the land immediately.

“In any event if you fail to vacate the land by 5pm Thursday 26th July 2018 then the landowner will exercise its right of self help eviction and have instructed us their appointed baliffs to carry out the eviction on their behalf.”

In response to a request for comment, Kumar said that “The University and the colleges share our city with the victims of an ongoing national housing and homelessness crisis. It is my hope that the collegiate University will step up to meet its social responsibilities, and help to fight this crisis in our city. But this is no way to treat people, and it is so unnecessary.

He has called for people to meet outside the Holywell Cemetery at 5pm, to register dissatisfaction with this.

In response to the action, Emma Turnbull, Councillor for the University Parks division that includes the field, has instructed City officers to provide support for the group