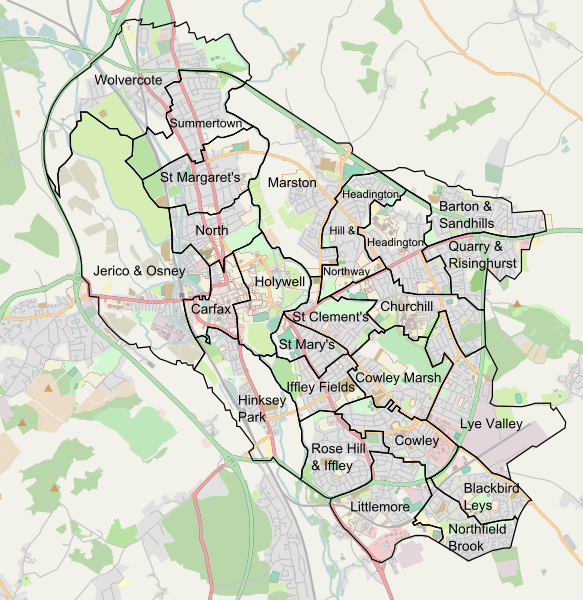 The Local Government Boundary Commission for England has recently revealed its draft plans for changes to council wards in Oxfordshire.

The plans come as part of a wider review of electoral boundaries across the country, which aim to ensure that all areas of the country are equally represented.

The Head of Law and Governance at Oxford City Council, Anita Bradley, has stated that: “Changes in the electorate mean that, instead of all wards in Oxford having roughly the same number of voters, significant differences have arisen between them. This review by the Boundary Commission will seek to correct that.”

Apart from electorate size, other considerations in designing new wards include community identity, facilities, and efficiency of local government, with recognisable barriers, such as rivers or streets, used to divide them.

Under the current draft, only three wards (Hinksey Park, Marston and Rose Hill) will retain the same boundaries.

The central ward of Carfax, whose electorate is forecast to grow by around 1300 in the next six years, will be split between three other wards to satisfy this need, affecting many central Colleges.

The majority is taken by the new ward of Jericho, which will add the previously electorally isolated Worcester College alongside others such as St. John’s, Brasenose and Trinity.

Also removed from Carfax ward is Keble College, whose boundaries will form part of the new border of Holywell ward, while Pembroke College becomes the single College in the Osney and St. Thomas Ward.

Proposals also include changing the name of the new St Clement’s ward to Bannister, in recognition of Sir Roger Bannister. The first man to run the sub four minute mile, and also a former Master of Pembroke College, Bannister died in March this year.

In all, the number of wards will stay the same at twenty four, each represented by two councillors.

It remains to be seen what these changes may bring to elections. For example, North ward, where both seats are currently held by Labour, is to be split into the new Walton Manor Ward, which will contain the Colleges of Somerville, St. Anne’s and St. Hugh’s, with the rest absorbed into Summertown, containing Lady Margaret Hall and Wolfson.

With Summertown returning two Liberal Democrats with majorities of 565 and 356 at the previous elections, and with the party experiencing a 14.6% increase in vote share in the North ward at the last election, they may be set to gain from this new voting arrangement. Voting changes may also be expected in other wards.

The consultation closes on the 13th August, with the final recommendations published on the 2nd October. If agreed by Parliament, they will be implemented for the next City Council elections in May 2020.