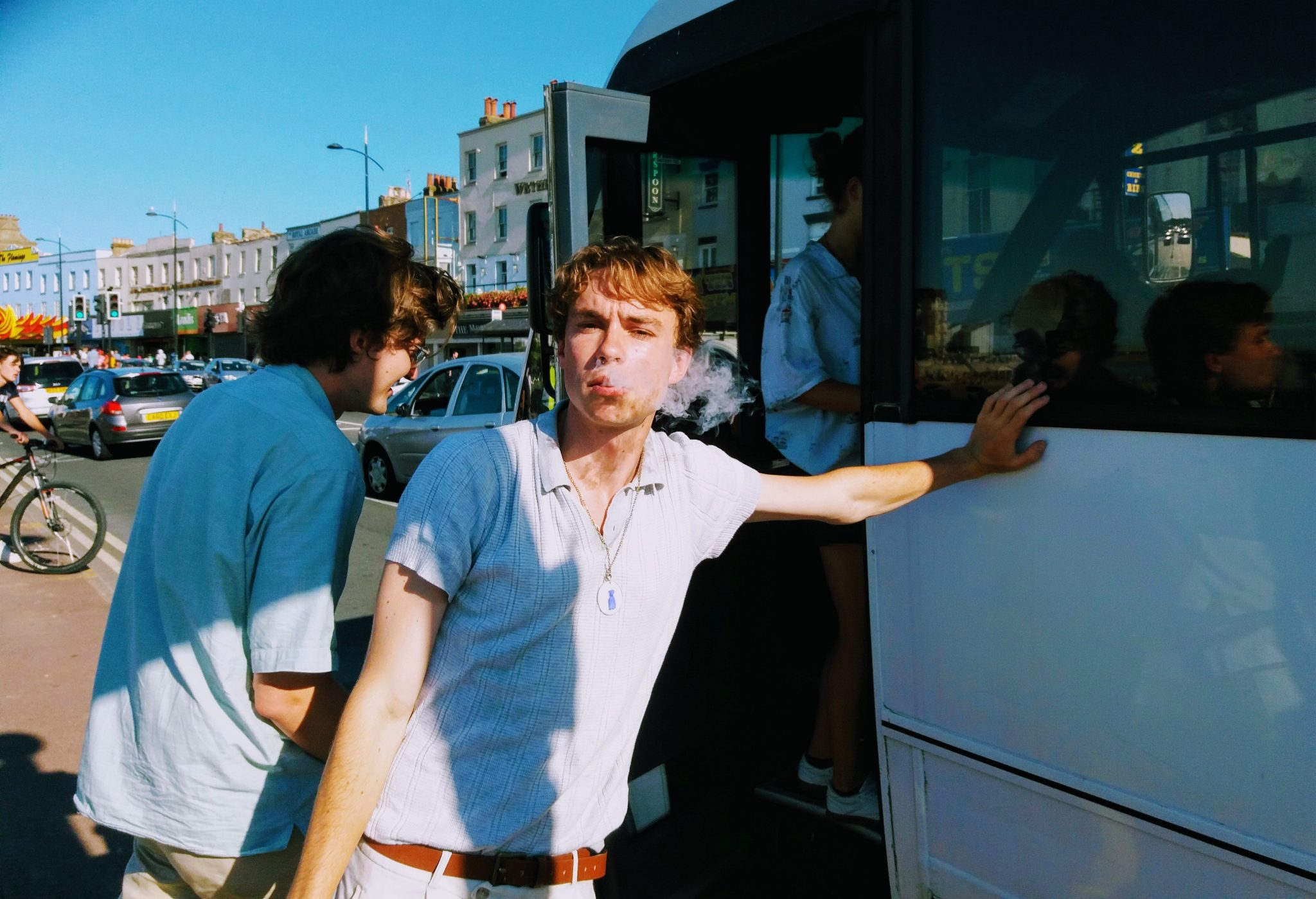 "Make sure you get me cigging it". Sports Team singer, Alex Rice poses for Oxstu
Life
·5th August 2018

Taking it down to the shore: On the bus with Sports Team live in Margate

In one word? Sweaty. Time for a swim. If there’s any place to go to brook the roast of that insidious beast popularly known as ‘ The Heatwave’, then it’s the breezy shores of Margate, Kent. Yelling at me neck-deep in water and in-between breast strokes is Alex Rice, singer of ‘up-and-coming’ indie band Sports Team.

Having been recently announced as headliners of the of the Reading & Leeds festival BBC Introducing  stage,  today also marks  the release of their new single, ‘Margate’ – a zingy three minute piece of pop vintage that’s like a classic Buzzcocks 45 laced with hard rock holler.  The song even finds itself a home in the hallowed realms of Spotify’s ‘New Music Friday’ playlist (“somewhere between Paul Weller and Iggy Azalea” – the band proudly announce on Facebook). A relaxing swim seems well-deserved. He’s warning me not to make this a hatchet job. I can’t promise anything.

Following  my speculative response to an offer made on social media of a free coach ride plus tickets for that evening’s concert in Margate, I count myself lucky to be profusely sweating on a white 33-seater Abbey Coaches bus, stuck in traffic on the clogged Old Kent Road in conditions so hot that it would likely be illegal to transport livestock in.

Sports Team guitarist Henry Young tramps the aisle offering warm Carling; there’s burning cold bags of ice as respite which I share with some of the band’s PR team. At a necessary break at Wrotham services, Rice, who’s obsessed with cricket, notes my ‘cricket hat’ and chats to me about spin bowling techniques: “Are you more Yardy, darting it in? Or Swann, and his drift.” He adds: “I tried to get the driver to put on Test Match Special but he can’t get 5live apparently”. Last time I checked England were eight wickets down, I tell him.

Rice tried blues cricket for Cambridge but “couldn’t be bothered with the training”. Instead of putting in the hard yards for actual sports, Rice and co. formed Sports Team  to get their student kicks (though bass player Oli Dewdner studied Theology at Bristol) only to find themselves, now based in Harlesden in London, having released the excellent Winter Nets EP and two highly entertaining singles: ‘Margate’, and a petty revenge song named after MTV star Ashton Kutcher. Their fingers are poised on the mythic ‘big-time’, as they look ahead to tours with Hinds and The Magic Gang later in the year.

“Do you need a picture for the Oxford Student? Where do you want me? Make sure you get me cigging it.”

By circumstance or otherwise, Rice is the band member I interact with most on this trip. Partly because he “doesn’t have to soundcheck”, and also because of his shameless sense for publicity. His dancing on the ‘Margate’ video is enough evidence of that. He only needs to see me stealthily photographing the humble white bus to offer to pose for me. “Do you need a picture for the Oxford Student? Where do you want me? Make sure you get me cigging it.” (This is the first time writing for OxStu has felt like a position of power. Take note, people, this is important stuff!)

After the sweaty bus, on the sweatier-still stage of the intimate Tom Thumb Theatre,  which has the band practically level with the audience, Rice notices a photographer down away to his left before falling dramatically to his knees, holding the microphone to his heart and leaning his head back mournfully like a marble Michelangelo. Onstage, his energy is relentless, drawing from the band and the audience. Part Jagger (“My one fact about Margate is that Mick Jagger got married in the hotel over there”, he tells me by the beach), part Swan Lake, the frontman ridiculously, mesmerizingly, jerks, pirouettes and pouts through the all-too-brief 45 minute set.

The band themselves are cooking. By all accounts, this show is up there with a fabled “Moth Ball Club” gig I hear everyone talking about. The tightly packed engine room of guitarists Rob Knagg, Dewdner and Young sparkles during the positively euphoric climaxes to ‘Camel Crew’  and ‘Back to the Point’. Al Greenwood slugs it out assuredly on the drums, with a cool crowd surf to finish, while the strangely quiet presence of Ben Mack on percussion and occasional keyboard is an odd and amusing counterpoint to the intensity of the group.

Sports Team are clearly game for a laugh, even the songs themselves  can be serious, almost sad.  Reminiscent of XTC, Pulp,  or Blur’s Modern Life is Rubbish, lyrically there’s actually a lot of bleakness. A trip to ‘Margate’ is prefaced with “I’m sure you’ve been here before.” Daffodils and Rhododendrons are “shameful”, spoiling views, or just  plain “fucked”. “The Avant-Garde is still the same,” Rice wearisomely sings on ‘Camel Crew’.

Yet, beneath it all I see an implicit, fiery optimism, the idea that irony and exuberance will help us cope with the miserable bits of life. It’s all in their style: a belief in the chorus, in the sprightly guitar hook, the blessed, blessed major chord, and linen shirts. Sports Team forget their sense of pride and gain all the dignity in the world by abandoning any worthy concept of it.  The revolution can and will be fun. Though it won’t be achieved without sweat and graft.

My final  over-riding sense is that there’s a strong purpose around this group who are smart enough not to take their foot off the gas. They’re fresh from the stage and chatting with the crowd in seconds. There are podcasts to record, interviews to do, fans to meet, photos to take, all powered by that dubious yet effective blend of martini espressos, Red Stripe and rolled cigarettes.

I came as a fan, and was as thankful as I’m sure  were all the other fans who got to spend some time with the ever accommodating Sports Team. But as someone who also cares about music, I am excited for what they have to offer next.