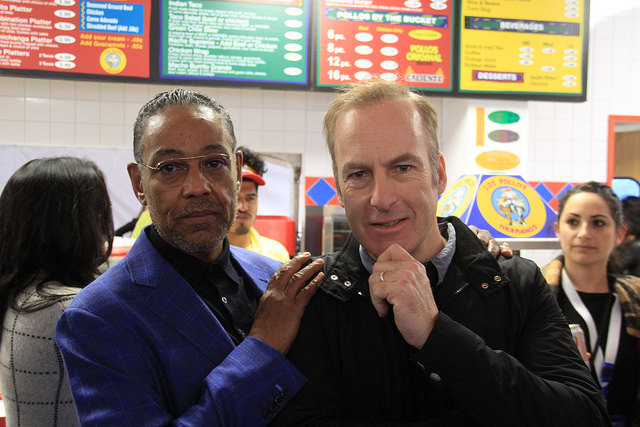 If there’s one attribute that Better Caul Saul has retained from its excellent predecessor – and there are many – it’s tension. The opening episode of the first season takes us straight back to the black-and-white flash-forward scene with Saul (Bob Odenkirk) at the coffee shop, but this time in even more dire circumstances and paranoia.

With a few brief images of flooding sink water, a spilt coffee cup by the edge of a table, and concerned customers, we then see a collapsed Saul on the cafe floor. In the very first episode, we are given glimmers of hope as pastry products are produced and Saul somberly kneads bread—albeit while cautiously looking around for attackers. In Season four’s introduction, however, the pastries we see in the first image are already made and set, a bleak metaphor for Jimmy’s inevitable transformation into the corrupt lawyer that he ultimately cannot avoid.

As in Breaking Bad, series creator Vince Gilligan uses music adeptly in Saul’s speechless scenes. After framing Season one’s opening with The Ink Spots’ ‘Address Unknown’, he uses the same band again, instead employing ‘We Three (My Echo My Shadow and Me)’ as a poignant reminder that, even after three seasons, Jimmy’s moral compass remains as divided now as the moment he began his ambition to become a legitimate lawyer.

The Ink Spots’ tunes have clearly created a powerful atmosphere of classical nostalgia and tension in the idea of the opening scene, as Frank Darabont uses their song ‘If I Didn’t Care’ when a drunk Andy Dufresne seemingly prepares to shoot his unfaithful wife in The Shawshank Redemption. Both men suffer injustices of the law, but only one makes it out intact on the other side. Tension is at the heart of Gilligan’s narratives, whether this unease is caused by a pursuing car or a mere fly.

But music clearly isn’t enough to create a fully-formed episode or series. Bob Odenkirk is on particularly fine form, expressing pathos, guilt and despair in a single facial expression as he runs towards the burning remains of Chuck’s house, and turns around to see a van already taking away the body of his dead brother. Rhea Seahorn also gives another brilliant performance as Kim Wexler, a stoic, understated individual who conveys more emotion with a stare than any conciliatory statement ever could. Mike (Jonathan Banks) and Gus (Giancarlo Esposito) weave back into the narrative as well, but it’s the two suffering former colleagues who dominate the focus of this episode.

Saul’s not good, man, and he’s only going to get worse.

Much of Saul’s emotional power has relied not simply on dialogue, but the distinct lack of it. No polished, hubristic Don Draper speeches exist here. Just pure silences with some stunted attempts at communication.

Yet the bleak nature of the situation nonetheless allows cinematographer Marshall Adams to provide us with an array of glorious close-up and deep focus shots. The image of tap water spiraling down a sink might seem overused, yet it still creates a distinct sense of pathos as the camera cuts to Jimmy’s tearful expression. Even the tragic nature of Chuck’s death is given a cathartic release as the remarkable deep focus shot of the destroyed house dominates the screen, and the dwarfed Jimmy simply stares on with helpless despair.

If Gilligan keeps this high quality going, then there’s no doubt he’ll be adding yet another flawless addition to an already outstanding prequel series.