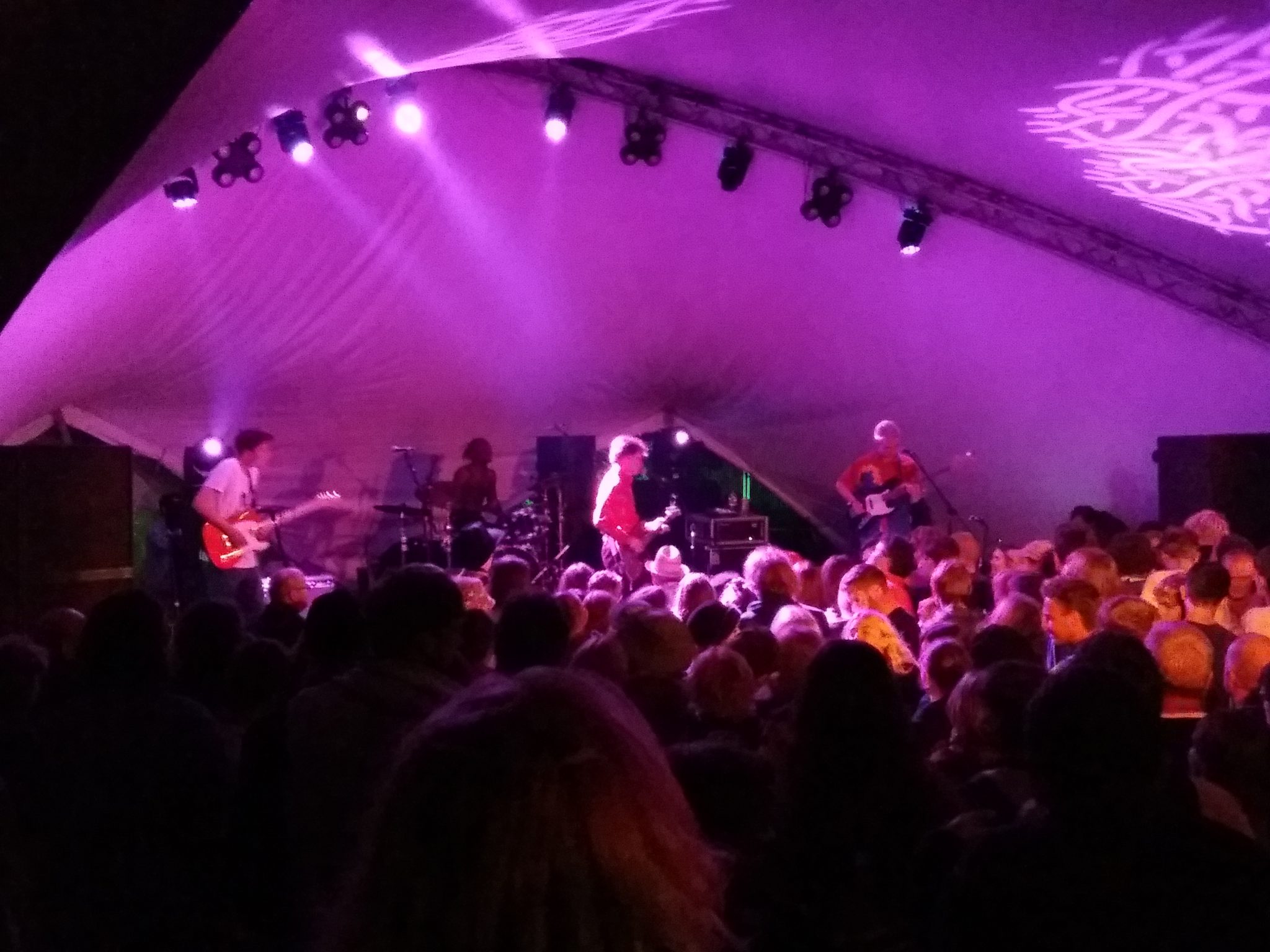 The Exorcism. Rebuilding After the War.

There are many things that I am hungry for.  A decent meal.  A good night’s sleep. An escape from this sweaty fag-butt smell.  But I didn’t know that five rude and inscrutable guitarists all playing the same chords quite slowly was one of them.

Neo-psychedelic veterans The Brian Jonestown Massacre offer an extraordinary release of inner tension. Frontman Anton Newcombe makes everybody mad by taking his time – which is a lot of time – between the early songs until the group get warmed up. Then we’re hooked: the druggy, idiotic chordage reverberates, raises us high and expands within our spirits to culture a sublime, psychedelic liberation.

Me? I’m jumping, screaming, purging myself of my bodily corruptions. In short, I feel like this is freedom.

What is remarkable is that everything sounds exactly the same, but I guess that’s the physical philosophy of hypnosis. Joints and whisky’d hip-flasks are distributed evenly among the hippy legion of long-haired men who have kept the Free Love thought of the 60s psyche-dream alive. Me? I’m jumping, screaming, purging myself of my bodily corruptions. In short, I feel like this is freedom.

After that ends abruptly and in dissatisfaction, obviously, on the final night of the Green Man festival, the whole attendance convenes around a large, cordoned off area occupied in the centre by the poetic presence of the eponymous Green Man statue. A pause. It catches alight and burns. Then Fireworks bloom and dance and all this chaotic experience becomes sparks swirling and vanishing into the night sky.

Its manufacture of wood, leaf and flower stood as the proud symbol of the festival’s natural, secluded life. Embracing the camping zones are the looming Brecon Beacons. The cool Monmouthshire air excellently refreshes pooped-out people upon a morn.  Aside from the fact that it hardly rained during the weekend, the greatest beauty of the Glanusk country park was its centuries old trees, oaks with twisted barks so wide that three of me in a human chain could not embrace its circumference.

So, with that setting in mind, let’s talk about the music now. From the beginning. The line-up is incredible.  Row, my festival companion and one of the legion of long-haired men,  whose love of smoking and psychedelic rock has brought me here in the first place, is weak at the knees for headliners King Gizzard and the Lizard Wizard and Fleet Foxes. The War on Drugs are also playing, but we do not catch their Sunday evening set because it clashed with Jonestown. Sorry to disappoint.

There are five stages in total, each with an impressive selection of fresh-faced indie acts and hyped London bands that I can’t wait to lay my ears on. Together, Row and I will make all the necessary observations.

I’ve got a fat list of who I want to see, and at the top of it was that bespectacled group of post-war nerds Public Service Broadcasting, who kicked things off on the Thursday night. Their last album, 2017’s Every Valley, focused on the social history of the South Wales mining community i.e. this place we’re in now so starting the festival with them was quite a good idea. Aside from the sampled voices and archive footage of thick, coal-dusty Welsh men and women, we’re treated to PSB’s earlier researches on Spitfires and the Space Race, all set to a tight La Dusseldorf-esque motorik.

Their lack of frontman is quite disorientating though. Bassist J.F Abraham would tease the audience with the prospect of Cathartic Showmanship before always retreating to a safe spot at the back of the stage to fiddle with some keyboard, drums or shaker. I keep thinking that everything was rather dry and restrained, but then I vaguely recollect some charismatic trumpeters and gyrating astronauts, and I can’t quite reconcile the two.

Come Friday morning, I’m zinged out from a bad-night’s sleep in a noisy campsite, tediously queuing for a coffee and a crumpet at Strumpets with Crumpets to the sound of Gwenno on Green Man FM, all the while deeply incapable of coping with the celebrity presence of Catlin Moran in my vicinity. It was a fucking tasty crumpet though. After breakfast, I range the site with the rare perspective of morning, observe children rolling down grass banks, families already hunkered down in camping chairs and picnics, neatly clipped gardens, Candle Powered Steam Boat stalls.

Come Friday morning, I’m zinged out from a bad-night’s sleep in a noisy campsite, tediously queuing for a coffee and a crumpet at Strumpets with Crumpets, deeply incapable of coping with the celebrity presence of Catlin Moran in my vicinity

I head back to the tent to see Row magnificently emerge from his tent to greet the day. We head to the Mountain Stage, that’s the main stage, and catch novice Bristol House-Pop exponents Park Motive. Dance-wise, the front three behind their keyboards look like distant relatives caught on a wedding dance-floor too late at night, too many wines down. Their rhythm section is excellent though, and we all have a good time grooving at noon.

A carefully planned stage-jumping hour then commences, First, at the dubiously named Far Out stage, two-piece The Lovely Eggs are unleashing their fun, irreverent freight-train  of grungey coarseness and abuse. I mean, they have a song called, ‘Dickhead’. Singer Holly Ross has wavy orange tights on; she thrashes her guitar like Billy Joe Armstrong and cradles it between her legs at one point as if siring a horse. The drummer, husband David Blackwell, looks like he’s in the Ramones.  Cut to Amber Arcades on the main stage and we have a more peaceful proposition. Blonde Dutch Duchess Annolette De Graaf is clad head-to-toe in a billowing golden satin suit. Like a sunflower in very light wind, she shows little sign of exertion. I don’t miss them play hit, ‘It Changes’, which is cool.

Omni, hailing from Atlanta, Georgia, give me no vibes at all. They’re uptight: the singer’s got a repressed Bryan Ferry thing going on and guitars sound thin on the ground. The set recalls the hard and ‘serious’ post-punk of the Gang of Four. But I don’t really like the Gang of Four, and at this festival I, and many of other people I meet, just want positive energy from their rock, not, fucking, Omni.

Row and I are both excited about seeing Snail Mail’s set at the idyllic Walled Garden stage that evening. I got into them a couple of months ago purely because my favourite colour is red, and they splashed a grossly saturated hue of the colour all over the cover of their debut, Lush, released in June. Row also liked their love-struck songs.  Petite singer Lindsey Jordan, who’s only 19, carries through that redness with a sleek Jaguar guitar and trademark (probably) plump red lips. And she’s dressed like a Bryan Lee O’Malley comic. Check out those sneakers!

It’s an angry set. Jordan caws, slurs and screeches in an indignant display of grumpiness. Unsurprisingly, they’re inexperienced, and admit as much. “We’ve never played a festival at night before”, she confesses to the misty rain. She’s distracted by sound-issues, and I catch each brooding member of their band nervously checking their watches. For the last two numbers, the band leave Jordan alone to bray, pick out her chords (to Gsus2 tuning, Row notes). I’m moved , but I speak to Green Man veteran Louie who’s seen this droopy indie shit hundreds of times before so what do I know?

Speaking of hyped London bands, I’ve a got a real hard-on for the up-coming Brit School contingent of Black Midi, who headline the Rising stage. One of their ‘songs’  is a cheesy monologue in faux-Brooklyn tones (Why!?) about checking the Tottenham Hotspur Vs Fulham score  in the New York Times. They’re so musically gifted they can play anything apparently, from Hardcore Punk (the snappy jazz drummer bellows with intensity at one point) to lilting arpeggiated mellowings. Partly because they won’t communicate with their audience, and partly because they manage to dreamily improvise for five minutes while the bassist strolls off fetch a fresh guitar strap, Black Midi are cinematic, like a playwright conceived them, flickering nostalgically as if from a 9mm documentary. Plus their bright collared shirts are incredible. Fuck yeah!

Watch this space for Part 2: The Gizzard Ecstasy and fall-out