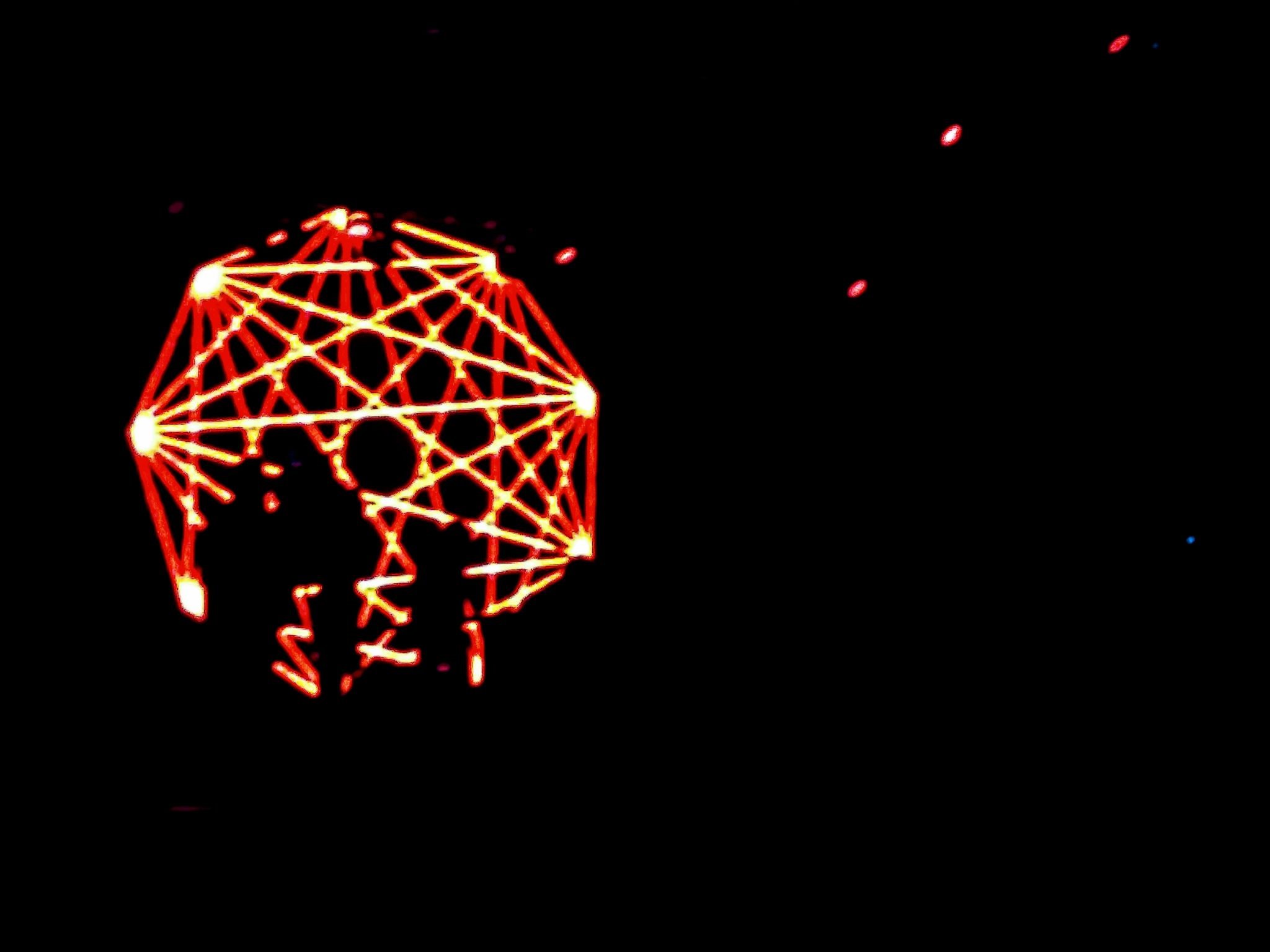 Friday Night has one more challenge for us: Aussie rock-warlocks King Gizzard and the Lizard Wizard. The game: Survival. I’ve dropped half a Xanax and am very much open to the idea of being transported.  When the Gizzard crew rock up, boxed in and drowning in guitars and drums, leader Stu Robertson, with his Metallica Tee and gymnastically lanky legs, initiates the sense-assault. Travelling through time must feel like this. The back projections are insane strobes of pattern, colour and light. The intensity is absurd. The riffs are hot.  The Choruses are catchy-as-hell: “CELLOPHANE! CELLOPHANE” I’m into it. “I PREFER THE MUDDY WATER’ I PREFER THE MUDDY WATER!”I pick up that one pretty quick.

‘RATTLESNAKE!’ will become the anthem of the festival. Like basic life forms, shouting ‘RATTLESNAKE!’ at random, will breed the philosophical reply, “RATTLESNAKE!”. From the other side of the campsite. At 5am. With come-down ‘The River’, Gizzard prove themselves true vibe-masters, taking us “Down…. Down, Down.”, literally to the ground. Everyone frantically tries to exploit the lull by nervously rolling ciggies and asking for lighters. 60 year old Sesh-Lords Ian and Jon hand out life-bringing Haribos to us youthful and overwhelmed. We all know that there isn’t much time before the scene will turn ape-shit once again.

Once the set burns out, Row and I experience our most sensational and victorious collapse to the ground. We’re absolutely fine. We’d originally planned to catch King Krule collaborator Mount Kimbie’s set. We definitely made it up there but I blacked out. By the time consciousness resumed as normal, he was just finishing up. Then Row had to make it back to the tent with an inefficient zig-zag stagger.

Now alone, I remember that more hyped Londoners, HMLTD, are playing right now at the Walled Garden. I see the last 20 minutes. I remember nothing of the songs except that they’re decent, and that the arty, glam aesthetic was just a specious show. But then again, my memory is hardly to be trusted here. But I do know that I slept beautifully.

In the post-Gizzard Fallout, Saturday is the slowest day. Here are some observations I noted down that morning:

“A crate of Magners fills me with jealous, regretful rage.”

“Smoking is clearly bad for you.”

The line-up today gives me less tumescence (remember Black Midi?) but we’ve still got some intrigue – more London chic and exciting indie rock.  So let’s just get on with in it.

In light of observation no. 3 re Magners’ crates,  Row and I are too lazy to take on the hour’s walk to the local shop for much much cheaper booze than the festival’s extortionate, watered down, variety. And, besides, we’re quite interested in not missing Boy Azooga on the Far Out stage. A dark-haired woman in front of us in the queue to the phone charging tent confirms that “they’re good”, which is as good an authority as any by the logic of festival small talk.

When we make it, Azooga are just warming up. From gentler beginnings, I’m taken aback by how heavy they become.  For some reason, I had anticipated a let’s-stand-appreciatively set.  But Row, after losing his shit, then lost a borrowed AUKEY Power Bank we thought was safest in his pocket.

We definitely made it up there but I blacked out

Professionals of the entertainment industry, Azooga fully have lyrics, which rhyme and everything, about audience participation. They conclude their set with a highly gratifying rendition of Kool &‘ The Gang’s ‘Jungle Boogie’. Again we’re pulled to the floor like the suckers we clearly are as singer Davey Newington intones, “Get Down. Get Down.”

With what can only be described as ‘peaking too early’, I cruise to the front and explode before the long-haired Japanese ear-annihilators Bo Ningen.  I’d seen them support the Fall a couple of years back, and they were okay, but it’s clear that these unashamed audience-cravers adore more the festival stage. Bassist/singer Taigen Kawabe pulls grunting  hamster faces to make it clear he’s ‘in the zone’, while the guitarists obliterate the very atoms encompassing them on either flank with coruscating riffs. I didn’t observe much, I was just lost in the noise, dancing with those same 60 year old Sesh-Lords who delivered me during the Gizzard Ecstasy. I hug a guy in a Hawkwind shirt, because good vibes brought us together. The bassists leans on the rails and hangs out his instrument like a fishing line for the climax because, again, we’re such a gullible crowd.

I didn’t observe much, I was just lost in the noise, dancing with those same 60 year old Sesh-Lords who delivered me during the Gizzard Ecstasy.

The scene is transitory thereon and I catch no other full set that day. We pass by Baxter Dury, the impudent cockney whose ultra -aggressive vocals sound crude against the low energy backbeat of ‘Miami’. It especially does if you’re only concentrating for about twenty seconds.

But the hippiest name on everyone’s lips at this hour is Goat Girl, the last of the hyped London groups  I see at Green Man. They do dress very well. Over-sized woollen jumpers, blooming three-quarter length denim trousers, septum-piercings – this is catalogue London Indie fashion. It’s a shame then the band are rickety wormwood ridden with holes. They do not seem together at all, awkwardly smiling at their errors like a cosy sixth-form covers band. They’ve got slomping groove potential though. This caught me off at first, because I only knew hit, ‘ The Man’, which nothing they played sounded like, so I’m glad they played it half-way through so I could leave and get a Bolognese. They’ve got strong gigs in them, maybe, but not today.

Sorry to be a downer, but Teleman, like that wank you didn’t need to have but enjoyed anyway, also really frustrate me because they master the build-up but never deliver the pay-off. I’m so conflicted, as they look so good, and their melodies are beautiful – especially new number, ‘Song for a Seagull’, which beckoned me in like a Siren call. But they are clearly just too goddamn well-rinsed and downright lovely to ever get grime on their fingernails. I notice they have a lot of kids in the front, who would probably have run a mile at the approach of Bo Ningen.

I feel sick by the end of Teleman’s set because I consumed my first rolled ciggie of Amber Leaf, courtesy Row, and got dizzy. So we must retreat to a shady woodland for a sit down and a natter while John Grant’s sugary, slithering set warbles along behind us. We enjoy shallowly justifying how we’re not really into the ‘dry’ and ‘insipid’ Grant to make ourselves feel important  at that moment.

Row is crying profusely to ‘White Winter Hymnal’ and ‘Quivering Forest’, while it takes me about 45 minutes to realise I’m actually really bored.

We pass by Byrdsy dad-band Teenage Fanclub for a cute song, but really we’re prepping for the Fleet Foxes headline set. It’s all been immaculately planned out: after last night’s Gizzard Ecstasy, we just “want to chill out”, sit on the grass banks and let the Foxes’ elegant songs for all seasons wash over us from a poetic distance. That was the theory. In practice, Row is crying profusely to ‘White Winter Hymnal’ and ‘Quivering Forest’, while it takes me about 45 minutes to realise I’m actually really bored. I mean, the sunrise is beautiful and all, and so is the sunset,  but it does happen every day, so get over it, which is how I feel about Fleet Foxes.

So, decidedly looking for kicks, I find them in the unlikely source of Middle-Aged Welsh-language folk outfit 9Bach. I arrive as they polish off some plaintive ballad, probably about the valleys. Then this wiry-haired lady rises from her electric harp towards the synth and lays down some filthy bass-line to turn even the Chemical Brothers green, and the Walled Garden just goes off. Frenzied percussion. Techno beat. Fleet Foxes can do one! This is the shit! When it’s over, a probable 9Bach aficionado notes to his friends that they “have not released anything remotely like that”.

I make it back to Fleet Foxes to witness a ‘high energy’ climax, all the while rehearsing through my head the extreme luke-warm feelings I want to express to Row concerning their set. “Wait”, he says, “where’s my wallet?”SHiiiiiiiiiitt.

So Row’s lost his wallet and now we have to find it. I reckon he needs more secure pockets. We optimistically yet half-heartedly scour the grass floors with phone torches to locate the black wallet amidst the crumpled lager cans and wine bottles. Then Row ambitiously checks the Portaloos at the other end of the site where he’d had his daily poo pre-Fleet Foxes,  assuring the bursting queuers all the while that he’s not jumping them, but is in fact devoted to a righteous cause, which they fully get behind.  With hope fading, we make a last yowling leap to the CND Lost Property Tent.  And Whaddya know? It’s there. “This isn’t Boomtown?” explains the gleeful staff-member, who allows Row to ring the Bell of Personal Property Recovery (name mine) after receiving his undefiled wallet. Another night. Another victory.

So we celebrate ‘till late to booming club mixes of Tame Impala alongside Bacchic OAP’s who have  toy Fox tails protruding from their asses. This is Green Man, isn’t it?

The Oxford Student in no way condones the use of smoking and recreational drugs.