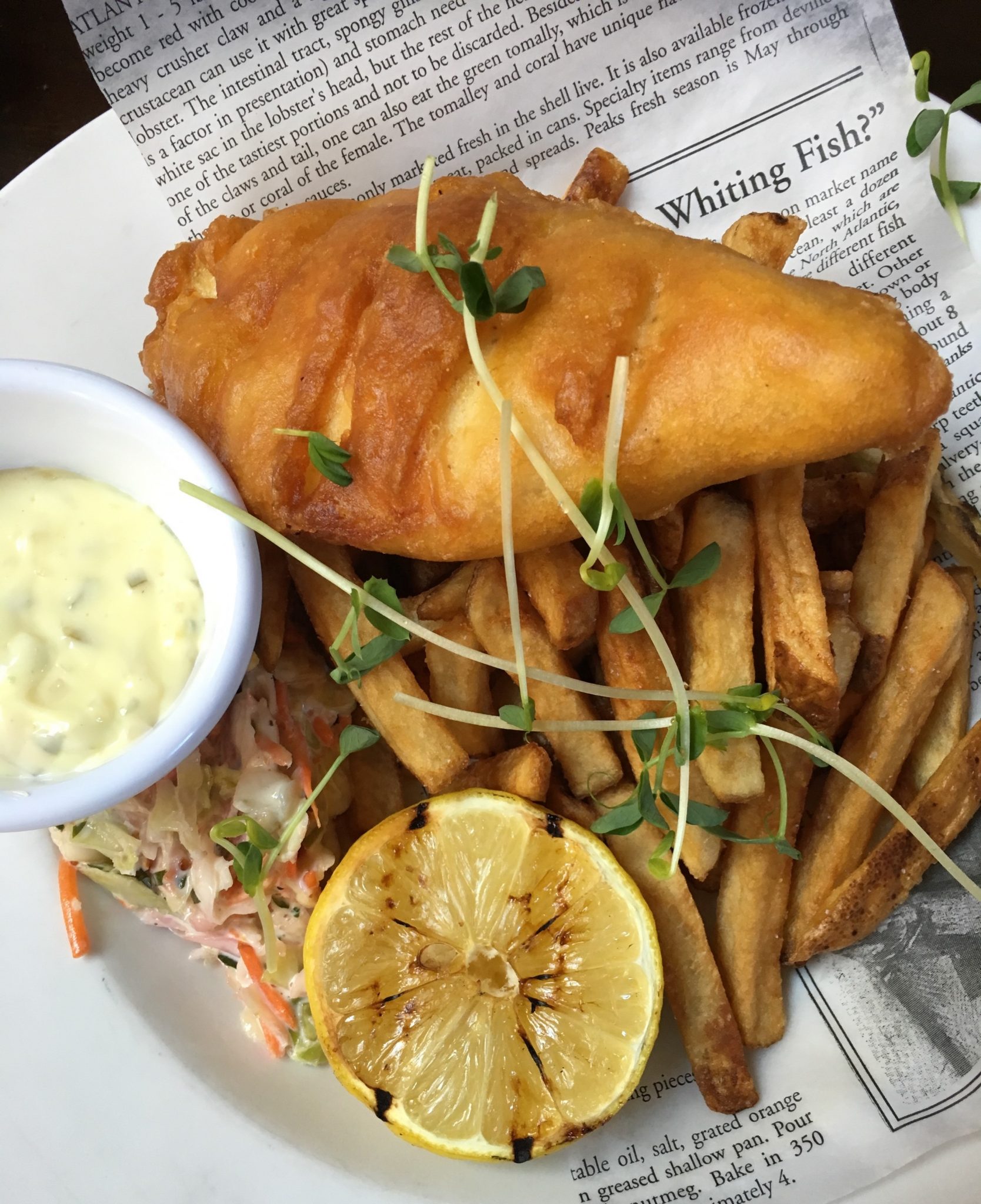 Halibut is the new salmon is the new cod.
Food and Drink
·31st August 2018

Toronto is an ethnic melting pot: originally in Iroquois territory (and before then it was occupied by the Wyandot people), it was invaded by French merchants, British refugees from the newly independent United States. In the subsequent centuries there were waves of migration from across Europe and Asia, all contributing to the city’s rich cultural diversity. However, in many ways, the British influence on the citizens (and their cuisine) is most noticeable, with images of the Queen and Ye Olde English Pubs being scattered throughout, though I get the sense that Ontarians are less enthusiastically British than their neighbouring Québécois are fervently Gallic. The celebrated nickname, ‘Hogtown’, was first used by Ontarians outside of Toronto wishing to insult the greed of those who wished to get rich and get fat in the city. However, it would prove to be rather apt when, in 1854, an Englishman, William Davies, founded a stand selling cured-meats in the St. Lawrence Market. His small business grew into an industry, and in order to preserve the pork for a trans-Atlantic voyage, Davies is credited with developing peameal bacon; a cured pork loin rolled in yellow peameal. This particular style of bacon became synonymous with the city and is the perfect way to start a day of feasting in Toronto.

It is said that there are few things an Oxford student loves more than a dead pig, and the towering Hogtown sandwich at Rashers certainly supports this. Founded by a Briton, Richard Mulley, it is to be found inside a rather cosy Queen Street site, with a sign above the window simply promising ‘BACON’. I was not disappointed. The auspicious stack of thick cut peameal bacon slices give it the heftiness of a steak sandwich, but the glorious flavour of bacon. Topped with a sunny-side up egg and cheddar cheese, which coat the mouth with delicious calories, and smeared with an ale mustard, providing a bit of acidity to cut through the richness (making it surprisingly well-balanced for such a vast quantity of bacon)– it is a triumph. At $10, it is on the expensive side for a bacon sandwich, but it is a superb breakfast. The menu offers a plethora of other sandwiches, using cuts of bacon more familiar to American and British consumers, but the Hogtown sandwich is the signature dish, an extra special celebration of the city’s porcine past, combining a distinctly British concept with the grandeur of North American portions and quality ingredients: fat and salt never tasted so good.

In a shocking twist, it transpires that the secret to incredible fish and chips is incredible fish and Canada’s Atlantic and Pacific coasts provide just that. Much like the bacon sandwich, it takes Canadian produce to transform the British classic of fish and chips into something truly great. Reliable Fish & Chips in Leslieville offers fish which would look out of place in most chippies, and one which looked particularly promising was the wild pacific salmon and chips for ten dollars. Deep-frying an oily fish like salmon could result in a greasy mess, but Reliable lived up to its name, creating a beautifully succulent fillet, steamed within a batter carapace. However, as superb as it was, it turned out to simply be a pretender to the throne: the true king of fish is the halibut. Although Reliable Fish & Chips offered the flatfish, I consumed it in the Distillery District instead. The Mill St. Brew Pub looked like any other building in this agonisingly trendy part of the city, with its bare brick walls and rusty metal. The halibut and chips is a special on Fridays, and was expensive (around twenty dollars), but it was sensational. The meaty, almost gelatinous quality of the fish (bear with me) and the crisp beer batter made it simply sublime, with each morsel melting in the mouth and reminding me of just how great fried fish can be. You will be able to find halibut and chips throughout Toronto, but the Mill St. Brew Pub provides the ideal setting for gourmet fried food by complementing it with gourmet beer. But it was a tainted experience, as now, whenever I have battered cod or haddock, the thrill is gone, my love for these chip shop classics has faded. I’m not easy to please, but that halibut, well, it was the best I ever had. However, there always has to be a black fly in your Chardonnay, and I had a problem with my side – French fries. As much praise as I will give the Canadians for raising my expectations of battered fish, I still maintain that chips served with battered fish should be, much like myself, fat and soggy. That being said, French fries are still delicious, regardless of their shape, and me being the turncoat I am, I may well eventually favour the potato preparations of our cousins across the Atlantic.

If you go to Canada and are not tempted to visit a Tim Hortons, have you even been to Canada?

Yes – but I can’t help but feel that my Ontario odyssey would have been incomplete had I not stuffed my face with an entirely unnecessary maple syrup donut. As difficult as it is to elevate a fried confection, glazed with the sap of Canada’s arboreal emblem, Tim Hortons delivered it well – a pleasant surprise given that I did not visit this institution of the ‘Great White North’, in Toronto, but rather in Niagara, a destination which complements an awe-inspiring view of the might of nature with tacky casinos and tackier gift shops. Named after a hockey player, Tim Hortons is unlike many of the fast-food chains originating from Canada’s brash, southern neighbour in that it lives up to expectations, provided that you expect it to be satisfactory.

Canada, like most great civilisations, is proud of its beer, ranging from the cans of watery (but perfectly acceptable) Molson found in the supermarkets to the extortionately priced body temperature Budweiser guzzled at Blue Jays games. However, high-quality beer (which does more than simply fill your bladder and make you feel lightheaded) is also abundant in Toronto. The Mill St. Brew Pub menu provides recommendations for the appropriate beverage to pair with each dish, and the lager I had did not do the usual thing lagers do, which is tasting identical, but rather had that little bit of extra bitterness which separates a can of what looks like dish water from something which is twice the price. Though not in the Distillery District, the Steam Whistle Brewing Roundhouse near the CN Tower greets visitors with the characteristic malty aroma, which I’m never sure if I like or not. The pilsner served there rivals any I had in the Czech Republic, and after a few of those, you may be tempted to gorge on an infamous delicacy originating from enemy territory.

As poutine originated in Quebec, it may be wrong to judge it as a concept based upon what I had in Ontario. It is constituted of French fries, cheese curds and gravy, perhaps with some additional components, but to say that it is a hearty dish would be ironic, given what it did to my cardiovascular system. Come Winter, I have no doubt I would have appreciated more, but to truly appreciate it I feel like inebriation would have massively helped. It is a testament to my greed that I ate it sober. I first tried it in the CN Tower, a Kafkaesque nightmare of queuing for queues which, once completed, revealed further, inexplicable queues. The poutine cost $10 (post-tax), which isn’t bad for a tourist spot, but it was somewhat disappointing: soggy fries and cold cheese curds, draped in a viscous chicken gravy. It looks like a sepia tinted Jackson Pollock, and tastes primarily of fat, which is delicious for the first few bites, but becomes a bit much after a few bites. After all the hype, I expected more, but I kept faith, and tried it again. The Boschian hellscape that was the Eaton Centre, with its ruinously expensive Blue Jays caps and small children running around, did not fill me with hope – but the poutine there was surprisingly good (though it was around four dollars more). Crispy fries, melted cheese curds and a rich beef gravy were topped with braised brisket. The addition of meat made it much more like a meal than something I could get from a kebab van for £3, and I suspect that with maple bacon, it might have been even better. You can’t have everything, soggy fries are very much part of the poutine pact – but the crispy upper layer of potato, contrasting with the saturated starch-fest which lay below, gave me hope. I intend to create a poutine so luxurious that it will simultaneously be perfect, and the cause of my own premature death.

Throughout my time in Toronto I mainly ate in Leslieville, and there was one place which, after dark, became a real local hotspot, Ed’s Real Scoop. The length of the queue each night is a testament to ice cream’s popularity with Leslievillians. I opted for chilli chocolate (a once unorthodox combination, now deemed to be a classic) and the limited time special of maple bacon. I started from the bottom of the five-dollar tub, sampling the pool of chilli, chocolate, maple syrup and bacon which had formed. It was very nice: consider maple bacon ice cream a bit like a more advanced salted caramel, with an added note of smokiness which works surprisingly well in a frozen dessert. My brother did say that the chunks of bacon in the mixture made it feel a ‘bit like eating dog food’, but it’s fussiness like that which is why I’m the family glutton and he’s not. The novel flavours on offer make this a fantastic late-night spot, and I even noticed a few stoners in there (as customers, not employees), so it has the seal of approval from that particular community too.

However, the few days I spent munching through the 6 with my woes (sorry) meant that I have barely tapped the rich reservoir of syrup that is Canadian cuisine. I predominantly stuck to the east, but I have since been informed by ‘What We Dig’, a Toronto-based food channel, that the west side has got some of the best restaurants in the city. Indeed, one aspect which I shall definitely sample next time is the Asian cuisine, a result of Toronto’s vibrant multiculturalism: 51% of the population are non-Caucasian, and that number is growing. I have no doubts that this will be reflected in the city’s gastronomic scene. Given the diversity of food available, it may seem odd to focus on comparatively mundane meals like bacon sandwiches and fish and chips – but these dishes encapsulate what I love about North American cuisine: different recipes from different cultures are taken and modified, and usually served in much bigger portions (though the food is still overwhelmingly beige). Healthy food is available, but, when the calories are this tasty, moderation is futile.

There is more to Hogtown than bacon, but they do it damn well. Sorry.