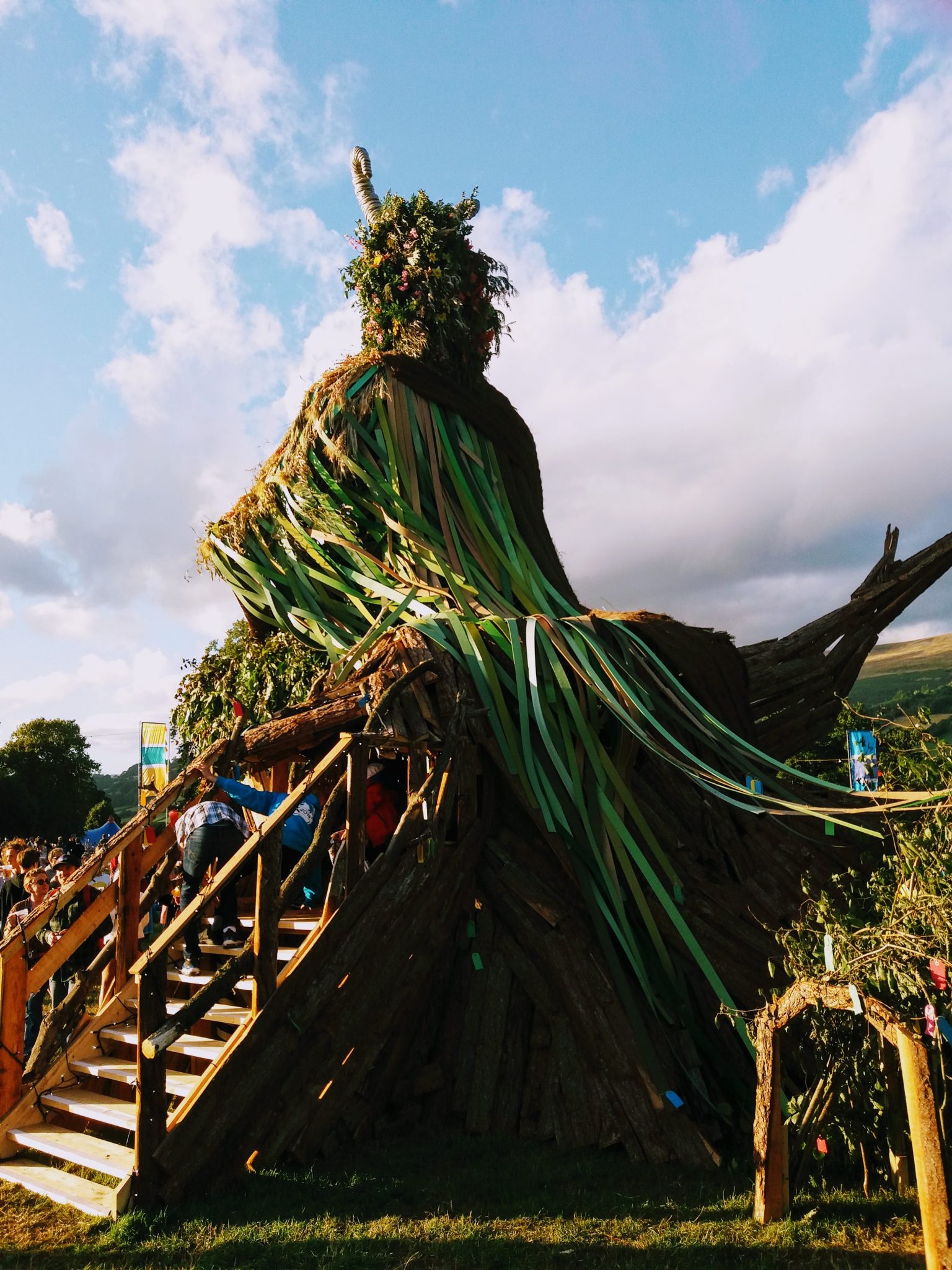 I’ll confess, readers, that I need a little cry after watching Sock. Not that they’re instrumental Mac Demarco jauntiness, which our ultra-hip Yorkshire camping neighbours had switched us on to, is particularly moving. Far from it. It is as grey and indifferent as their indifferently grey clothes. And I got sunburnt watching them.

I guess vibing really hard for three days straight is pretty draining. For what is my first ever music festival, I’d come a long way from the Thursday Afternoon Novice that I was. Stressed about clashes, hindered by the anorak around my waist and its heavy pockets, transformation came in the form of an early evening nap and the purchase of ‘funky’ purple satchel for £15 from one of those quirky new-age fashion stalls they put in place so that the Awkward can feel at home at festivals. These two things revolutionised me. Firstly, I recognised the importance of rest. There’s no use in trying to see everything at once; there were tonnes of interesting lectures, book talks and films screenings in the Cinemadrome, notwithstanding  actual bands, that I contentedly missed. Secondly, being able to jump around without sub-consciously scanning my pockets every 2 minutes freed my limbs for the dance.  I had to hitch my shorts up too many times during the Gizzard Ecstasy.

Not only that. I acquired some Haribos on the essential wisdom of the 60 Year Old Sesh-Lords and a red cigarette lighter – the ultimate social weapon at this smoke-chimney festival. I reluctantly forced myself to sacrifice my vegetarianism in order gain maximum nutritional and economic muscle from my one-meal-a-day, biscuit heavy diet. My beige Ray Mears had become a mainstay and felt iconic. I never took it off, and would eventually become unrecognisable without it on.

As a team, Row and I became festival machines. We’d party ‘till late, write off long, lazy mornings; each morning we would plan our gigging schedule, including when to take a crucial food, coffee and fag break before the wildness of the evening began. Most gratifyingly, we had acquired allies in the righteous cause of Indie and Alternative music.

But Sock broke me. The social intensity and anxiety. The lack of sleep. The constant sensory stimulation. It all needed the release of tears. It must be said however that Bad vibes were hitting me pre-Sock. I’d met with this pretty Welsh girl at the water station who I had danced with during the Gizzard Ecstasy. Her blue cheekbone glitter had faded since then, and her hoodie now had an ugly rip on its shoulder. I wanted to chat, but my words would not come out. I muttered some question about Saturday, (“y’know, how was it”), and she mumbled something about the brown water, which is apparently not a problem. I brushed my teeth coyly and left resentfully. Then I attempted to exploit the slight queue and take a reviving shower, but I got freaked out by the open communal changing area so bolted. Refusing swimming lessons crippling me.

And yet, that teary moment of emotional sobriety did provide the perfect palate cleanser to Stella Donnelly’s spunky set at the Walled Garden. In a warm but gracefully flowing black rain coat and boots, Donnelly immediately put the audience at ease with chat about her Welsh family, vile Australian lager and shit boyfriends: “ Funnily enough, children have never complained to me for using the word, “fuck”, she cheerfully explains. A smiling vision of beauty, peace and righteousness, her serenity made the  coming indictment against woman shaming and sexual assault that is ‘Boys Will Be Boys’ all the more shocking.

During my strange mid-Fleet Foxes wanderings, I definitely witnessed sexual assault first hand outside a pizza van that was hosting an impromptu drum ‘n’ bass rave. This disgusting fat bloke with a beer in one hand and  probably about ten more stowed in his gut pawed at this teenage girl’s chest and she ran away screaming. Now, I wish I’d done something, but I was so stunned seeing that, and felt so absent from that extreme midnight world that I just moved on, shamefully, not thinking about acting until it was too late.

So when Stella Donnelly sang, “Your father told you that you’re innocent / told you women rape themselves / would you blame your little sister / if she cried to  you for help?”, I got my heart lodged in my throat, in a way which wouldn’t have happened 24 hours before.  You should listen to her latest EP, Thrush Metal.

Time to take a back seat for Hayley Heynderickx, the universe’s most gentlest soul, who sings about insects. It’s lovely, but I’m ready to switch off and talk to the woman next to me from Brighton about the time she proudly snuck the “smelliest Camembert ever” past festival security. Freshly bought Camembert is ready to eat after a day in a hot tent, she tells me. Last night, a similarly interesting trade of words occurred with a hat seller, of similar middling age to Ms Camembert, who was quite pissed by that stage on free handouts of whisky. It was  a rigidly one-sample-per-person affair, but she and her fellow milliners peevishly two-finger’d The Man by wearing a different hat each time they approached the vendors, thus concealing their true identities, all in the name of getting hilariously drunk. People can get all sorts of kicks at music festivals.

We hear Hayley finish with ‘I Need to Start a Garden’, her moment of greatest radiance, then slink back to the tent before the weekend’s Swan song. I grab a hot shower and causally embrace my male nudity, which is easy.

On our way to the Walled Garden, Kevin Morby pricks our ears on the main stage with blissed-out bluesy jams about the Harlem River, coiffed in Jack White hair. It’s pretty good. But I  leave Row to it, because I came here for the good time Scots, Sacred Paws. Their bustling African rhythms and delightful  guitar hooks are huge fun. The singer Rachel Aggs leaps in socks, the more upbeat kind. They have new songs, which sound as good as the old songs, despite how badly they claim to be playing them. They finish on signature  tune, ‘Strike a Match’, which is when Row arrives, takes me by the shoulder, and we both go , “YEAHHHHHHHH!!!!”.

More impressive Australian Indie-rock? I’ve been buzzed for them all weekend, but Row had only been listening to Rolling Blackouts Coastal Fever for about 5 minutes when he is suggesting we neck out pints and charge to the front. Their set is tight, cruising and momentous. Their community of three frontmen shares an energy which centres on a driving acoustic guitar rhythm and a couple of baseball caps. The Blackouts impress upon me a hypnotic vision of a right forearm strumming up and down and never stopping, for eternity. Their first album, Hope Downs, was a long time coming, but they now seem a breezy rush a confidence compared to say, Goat Girl. We dance the whole hour.

Then there’s one final rest before Sunday truly goes insane. We all know about what happened when I saw the Brian Jonestown Massacre, but before all that was the coolly colossal set of Grizzly Bear. The songs from 2017’s Painted Ruins sounded hot, probably because they were the songs I knew, and we all know ‘Two Weeks’ don’t we, whether we’ve recognised it yet or not. Dressed in an unassuming fashion of hoodies, blank t-shirts and straight denim, it’s the choral melodies, and thumping, hissing soundscapes that emerge most gorgeously. It’s entertaining. It’s Nice. It’s Grizzy Bear. Shame it’s hard to unhear the weird audience chat about Pie-Minister and it’s fabulous pies. “We’re chatting shit, Green Man”, says the bassist, tuning up. Too fucking right you are!

And, err, that was Green man. I didn’t sleep at all on Sunday. With a whole host of extremely lovely people, the night boiled over with Northern Soul and skanking house beats ‘till dawn. There was also a final heartfelt moment with the ubiquitous 60-year-old sesh lords who are heading to a woodland rave festival in the autumn.

The journey home was obviously disgusting. Apparently sleep is vital though we don’t know why. Green Man had captured me in its snare, then ripped me out mercilessly. I found a bed. Crashed.