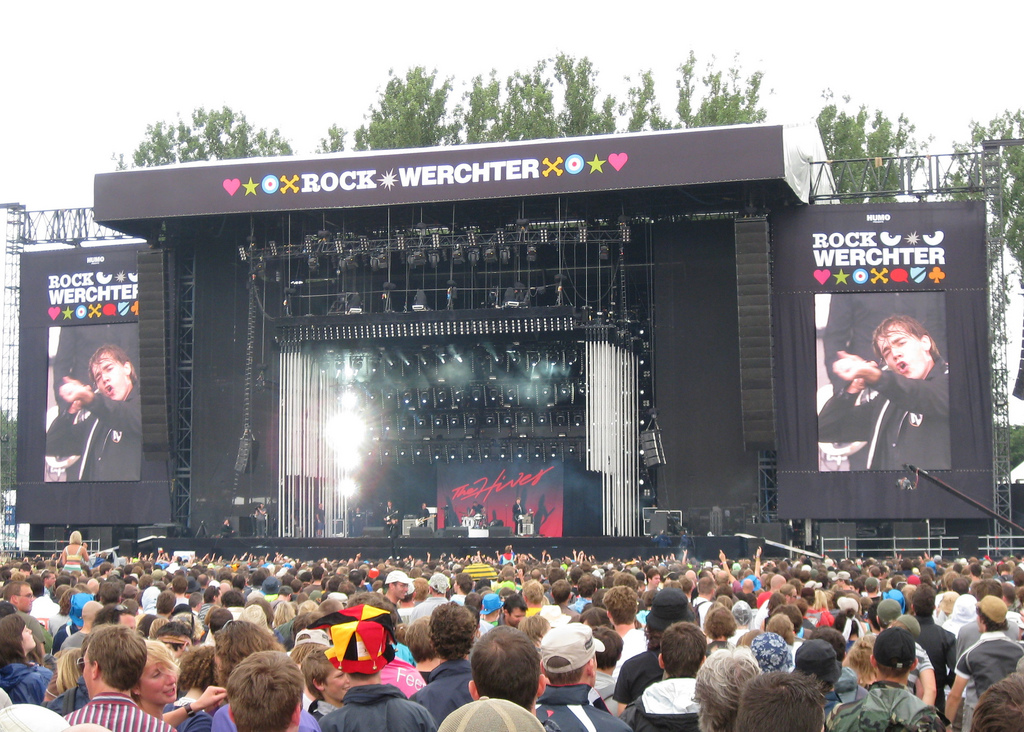 We say we go to festivals for the acts. (‘The line-up looks sick, honestly mate. Noel’s there. Got any papers?’) The line-up at Rock Werchter was indeed immense, and it did deliver. But come on – did you really go to Leeds (Er, I think you mean Reading, mate” – male, 19, Home Counties, bucket hat) in 2015 because and only because the line-up was so good you couldn’t pick between The Libertines and DeadmauFive on Friday night? You might have said the music was amazing, but the memory you look back on most fondly is that of your friend’s tent being flattened by some post-GCSE Yorkshireman on ketamine wearing a bucket hat. You go because there’s a bit of fun in, once in a blue moon, shitting in a field. NME (with VO5!?) just put out a review of Rock Werchter, and made it seem as if you’ll definitely shower every day and drink cocktails and have beautiful hair. Don’t believe their lies, festival novices. No matter how classy you think you look: when you get back from Jorja Smith you’re off to shit in a field.

And as far as doing that in a field is concerned – and other camping amenities of that ilk – Rock Werchter was really good: porcelain bowls, small queues, easy access to water, free ear plugs, easy transport links (from Brussels), a good few showers (if you could be bothered), fairly convenient phone charging. The campsite and Festivalpark exude a family-friendly atmosphere. I’d go as far as to say that this is one of the nicest ways you could shit in a field. Security is extremely tight, which your mum would love. I’m sure if you’re there for a certain type of festival experience you’ll find this frustrating.

If you go, you’ll probably be in The Hive, as that’s where you’re told everything is happening. And it sort of is – there’s a stage at night, plenty for you to buy, but you’re also told it’s right next to the festival park, which is untrue. It’s quite far away (there’s a camp much closer) which proved trying in the heatwave. Everything is also pretty expensive, with inconvenient and easily-misplaced tokens used instead of cash or card. The tokens are not so much of an issue though – you can very easily purchase cheap(ish) food with cash on the street outside the festival or get the free shuttle bus into Leuven to get your fix of crisps and lukewarm Pilsner.

This is perhaps an unfair criticism, but it was very warm. There was free water in The Hive and sun cream in the Festivalpark, but tents became saunas by sunrise. Shade was also hard to come by at times – generally, the Festivalpark itself wasn’t equipped for this level of heat. Large security queues exposed you to the sun, there was little shade at the outdoor stages, and a ban on bringing in bottles meant buy water in there with a token or shrivel up. The heat was of course relished by the small, yet consistently loud, shirtless contingent of In-ger-land fans, for whom the heat signalled that Endless Summer had come with them to Belgium, that it’s coming home and, Christ, Harry Maguire just thwacked it in with his massive head! If this isn’t your scene then, Southgate-permitting, this won’t be an issue until Rock Werchter 2020.

Now, the music. There were four stages in all – the Main Stage, The Barn, Klub C, and The Slope. The first was home to the headliners, the middle two housed smaller acts indoors, and The Slope was a more intimate outdoor stage for lesser-known artists. If an act disappointed or confused audiences, it seemed more down to their being misplaced rather than simply bad. This fate befell Nick Cave and the Bad Seeds in particular, who were playing on a massive stage to a crowd waiting for the Arctic Monkeys when their mixture of wailing crescendos (‘Loverman’) and slower, piano-driven rock (‘Into My Arms’) might have suited a later slot on a smaller, more intimate stage.

Queens of the Stone Age, too, played perhaps for a bit too long. Their set lulled into a dirge in between thumping tracks like ‘The Way You Used To Do’ and ‘Burn The Witch’. Jack White’s policy of making everyone’s face melt with GUITARS also yielded mixed results. Tried and tested hits like ‘Dead Leaves and the Dirty Ground’ and ‘Seven Nation Army’ tided the crowd over better than most of his bluesy solo oddities. In honesty, though, this reviewer’s biggest letdowns were of his own making: a strict security setup at indoor stages forbade him entry to certain acts after capacity was deemed to have been reached. As such, I missed Franz Ferdinand, Fleet Foxes, and George Ezra. Oh well. On with the good.

The festival benefitted from a four-day line-up, offering a glut of brilliant acts each day. Thursday’s headliners, Gorillaz, put on a phenomenal live show, providing enough energy and some amazing guests (De La Soul, Little Simz) to keep the crowd invested through a long set that featured many newer or more obscure tracks. At one point, Damon Albarn removed his Stone Island jumper to reveal a Stone Island top beneath it, before singing “Eden Hazard” to the tune of ‘Kids With Guns’ (The Gallaghers would never do that).

The Killers, too, put on a spectacle. Brandon Flowers’ swaggering Mormon figure carried the set from anthem to anthem, finishing with the most un-ironic collective enjoyment of ‘Mr. Brightside’ you could ever witness.

The final act of the festival was Arctic Monkeys, with Alex Turner’s weird Sheffield-Cowboy-On-The-Moon persona proving annoyingly cool live. The performance was impressively tight and energetic as Turner guided the audience through classics like ‘Cornerstone’, ‘Teddy Picker’, and ‘505’, the closer. The new Tranquility Base Hotel & Casino tracks were the low points of the set – I couldn’t help but feel that an album of songs performed in character as a lounge singer comes across better in, well, a lounge.

There was great fun to be had deeper down in the line-up as well. Indie rock faithfuls not there just to see Alex Turner sing about taxi ranks had their hands full with as-expected, energetic shows from The Vaccines, Noel Gallagher’s High Flying Birds (who closing with an Oasis medley to make even the most contrarian of hearts melt), and Courteeners. Enjoyable sing-alongs were also be found with the likes of The Kooks and The Script, with the latter forcing the audience to cast aside any prejudices they may have and submit themselves to Danny O’Donaghue’s brilliant sub-Bono cheese: he asks this Belgian audience for an end to separatism before bursting into a confetti-covered rendition of ‘Hall of Fame’.

All of these acts were on the main stage, yet two non-headlining highlights were to be found on the smaller stages. On ‘The Slope’, Australian electronic duo Flight Facilities put on the party of the weekend, whilst the most memorable performance of the festival came from Talking Heads’ large-suited David Byrne in The Barn. A stage full of identically-suited musicians danced in step with Byrne himself as he demonstrated his evolution from singing to lamps in 1983 to singing to a model of a brain in 2018.* His new songs are good, but the Talking Heads tracks sprinkled throughout the act were simply wonderful – ‘Once in a Lifetime’ and ‘Burning Down the House’ got thousands dancing, and ‘This Must Be The Place’ is predictably joyful live.

Rock Werchter, then, is a music festival that is properly ‘for the music’. My earlier comparison to Leeds is poor – the facilities are so clean, the acts so good that it is clear that this is a festival designed for maximum enjoyment of the music. It’s a good job, then, that the music was so good, better by far than any UK-based rock festival this year**. If you want sonic purism, go to Rock Werchter, and pray it’s sunny. But if what you really, really want is thrilling squalor and jeopardy, go to Leeds and shit in a field.

*(Click here for David Byrne singing to a lamp)