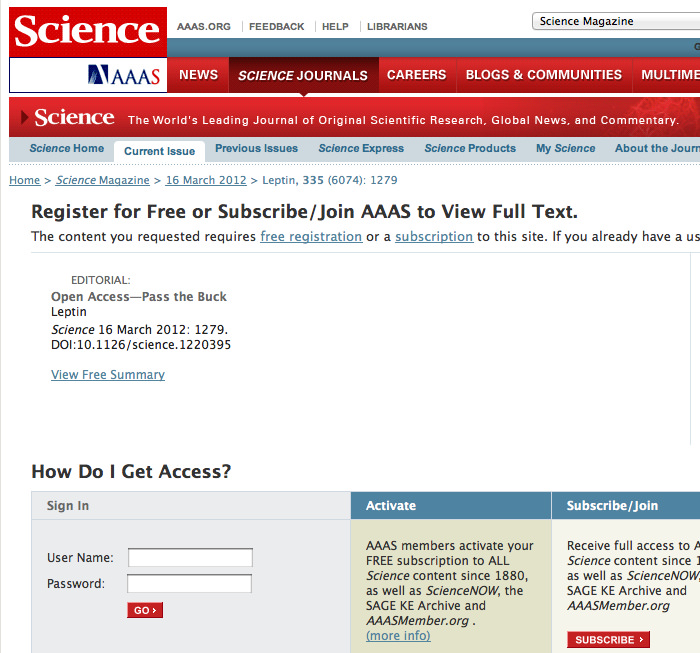 A group of eleven European funding organisations which contribute annually around £5.9 billion in grants for scientists, have agreed to ensure that scientific papers written by their grantees shall be open access from the point of publication.

This will be accomplished by banning their grantees from publishing in pay walled journals (those that require the reader to pay to read the article). The date of full implementation shall be the 1st of January 2020.

The current situation is: most papers become open access, thus free to read, six to twelve months after publication. This is the case for papers published in many subscription journals. For some time there has been a growing contingent of those who advocate for a move towards making more published research open access and it seems as though they have secured a major victory in this case.

An initiative has been formed with the purpose of radically increasing the amount of open access work published in Europe. Science Europe president Marc Schiltz, Open Access Envoy for the European Commission, Robert-Jan Smits andthe heads of the eleven funding agencies have together created cOALition S. cOALition S’ creation was announced by Science Europe in Brussels on September the 4th; it is supported by the European Commission and the ERC (European Research Council).

“I call upon funders, from Europe and beyond, to join cOALition S and upon researchers, universities, research organisations, libraries, and publishers to express publicly their support to the ambition of the coalition to accelerate the transition to full and immediate Open Access by 2020” -Robert-Jan Smits, calling for an integrated effort on the behalf of diverse institutions to embrace the proposed changes.

One of these principles is a condition that labels hybrid journals as incompatible with this new publishing model. Hybrid journals are those that make certain content free but also charge for a subscription; funders of these eleven agencies shall no longer be able to publish in these. Also contained within the principles is a statement ensuring that authors will maintain full copyright ownership.

Advocates of this scheme say that this will make science more open and that with knowledge being more readily available, more valuable research can be conducted at a faster pace.

​“The chain, whereby new scientific discoveries are built on previously established results, can only work optimally if all research results are made openly available to the scientific community”. Mark Schiltz wrote in the preamble for Science Europe introducing cOALition S.

“ ‘Knowledge is power’ and I firmly believe that free access to all scientific publications from publicly funded research is a moral right of citizens.” – A statement from Carlos Moedas, European Commissioner for Research, Science and Innovation.

However, there has been a substantial amount of criticism of the overarching principle.

Around 85% of periodicals employ paywalls when publishing content. Included in these are the giants Nature and Science publishing groups. To provide some context, Springer Nature publicises over three thousand journals. Under this scheme, scientists may not have the option of publishing their work in journals with the highest impact factors. This will undoubtedly necessitate the community to employ new metrics by which to measure the success of academic work; if this is implemented strictly throughout Europe.

In an email to Science Insider, a spokesperson for Springer nature wrote:

while a spokesperson for AAS (the publisher of Science) stated:

“Implementing such a plan, in our view, would disrupt scholarly communications, be a disservice to researchers, and impinge academic freedom.”

Both of these quotes were published on sciencemag.org.

Other publishers have predicted that the initiative shall severely undermine the quality of peer review. Moreover, Sweden’s science research council has criticised the proposal suggesting that the timeframe for the implementation of the scheme is too optimistic.

Whether the fallout of this move will be positive or negativeand whether more organisations shall sign up remains to be seen, but what is certain is that this hasthe potential to transform the way that science is conducted in Europe.

A PDF list of collaborating funders can be found here