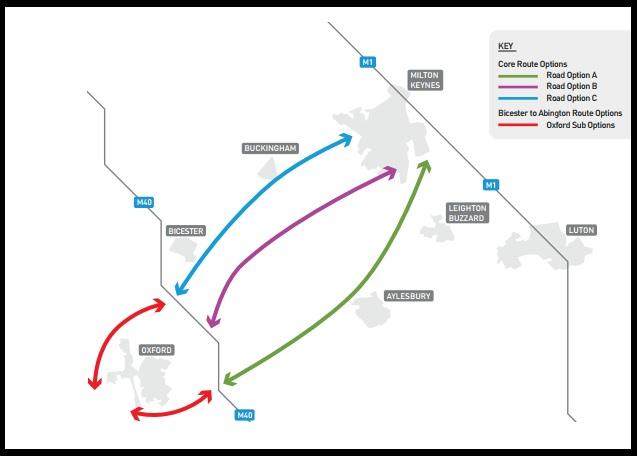 The Government’s preferred option for the new Oxford to Cambridge road link has been announced.

The new expressway, or dual carriageway, aims to provide a direct road link between Oxford and Cambridge via Milton Keynes, connecting what a report by Highways England calls “some of the UK’s most successful, productive and fastest growing functional economic areas.”

Initially, three options had been proposed, with Option A passing via Aylesbury using the A418, Option B utilising a new road alongside the reconstructed varsity line, recently given permission for the second stage of construction, and Option C using the A421 via Bicester.

Option B has been selected as the government’s preferred option, with the route expected to take around 40-50 minutes off a journey from Chieveley, south of Oxford, to Girton near Cambridge.

The Government sees the route as part of its strategic plan to improve connections between Oxford and Cambridge, increasing job catchment areas, the flow of academics and reducing congestion. Sajid Javid, then housing secretary, also said in March 2018 that he would approve 2 new towns to be constructed along the route, with the possibility for more. The expected announcement has not yet been made.

Campaigners have raised continued to raise concerns about the proposed route, after previous concerns were satisfied after the government ruled out the route passing through the Otmoor nature reserve. The No Expressway Alliance, a group formed last week from a range of smaller organisations to fight the plans, has said to The Oxford Student that “there is no need for this road” and would like to “see improved transport links through the rapid construction of the ‘East-West Rail’ Oxford – Cambridge rail link… before any road programme is considered.” The chief executive of the Berks, Bucks and Oxon Wildlife Trust, Estelle Bailey, said that “the potential impact on biodiversity of corridor B is so serious that the route should have been discounted entirely.”

Meanwhile, the council released a statement, which, while “welcome[ing] the commitment to plan for and invest in major infrastructure to support housing and economic growth in Oxfordshire”, also called for an end to the uncertainty surrounding the “opaque process” and a “prioritisation of clean, green and public transport.”

The expressway is currently forecast to open in 2031.