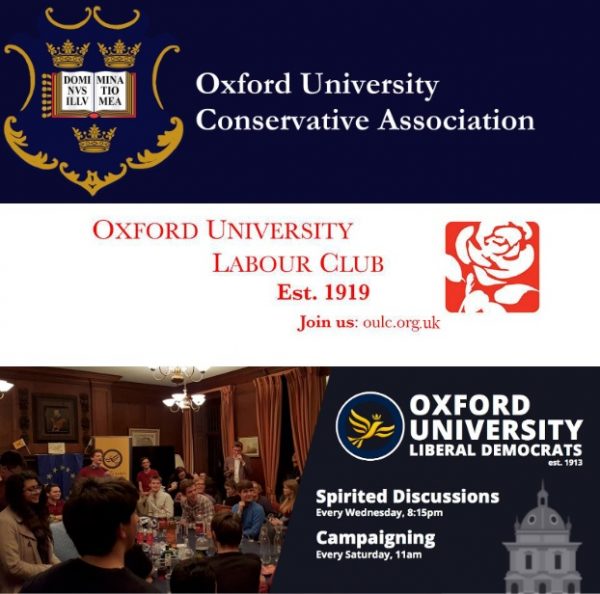 The Oxford University Conservative Society (OUCA) aims to promote Conservatism within the University, in addition to providing an open forum for students to express, debate, and refine their ideas. Best known for their weekly, “Port and Policy” debating event, OUCA also takes great pride in their charity work and social action, aimed especially at helping the homeless population in Oxford; they campaign in constituencies around the country, host speaker events with all the big names in Conservative politics, and put on a full calendar of excellent social events. Some notable special events this term include Fresher’s Drinks with Robert Courts MP on October 7th, Women’s Drinks with Amber Rudd MP on October 31st, and The Grand Debate on November 19th, which will be a three-way debate between OUCA, OULD, and representatives of Labour hosted and moderated by the Oxford Forum.

“We’re very excited to hear from such a broad range of speakers: from former party leaders and cabinet ministers to regional mayors and prominent backbenchers. Coupled with a packed social calendar, campaigning around the country, and of course the return of Port & Policy, our term card offers something for politicos of all stripes.” – Ben Etty, OUCA President

Serving as a Member of Parliament for East Surrey since 2010. As The Minister of State for Universities, Science, Research, and innovation – he is described by some as a rising star within the party. He will be speaking at the Union debate on the same day

Sir Bill first entered parliament in 1984, serving in Ian Duncan Smith’s shadow cabinet from 2001-2003. A veteran Eurosceptic, Sir Bill is now the Chairman of the European Scrutiny Committee and is a champion of gender equality in international development.

A former lawyer, Mr Chalk was first elected to Parliament in 2015 and played a major role in doubling the maximum sentence for stalking as a member of the Justice Select Committee in 2017. He is now a Member of Parliament in Cheltenham.

Ms Rudd, Former Home Secretary, will be addressing the OUCA Women’s Drinks. She replaced Theresa May as home secretary in 2016 and stood in for her during the Leader’s debate held before the 2017 general election.

Elected Mayor of the West Midlands in May 2017, largely with the campaigning support of OUCA, he was the managing director of John Lewis before entering into politics.

Bright Blue is an independent pressure group that campaigns for liberal conservatism. As part of OUCA’s Think Tank series, this talk is a great opportunity for members interested in a career at a think tank to ask questions and see what it is all about.

A member of Parliament of Wellingborough since 2005, Mr Bone was a central player in the campaign to leave the European Union and has been the Conservative Party’s most rebellious MPs.

Now a Member of Parliament for Wokingham, Mr Redwood is the former Secretary of State for Wales and a veteran Eurosceptic who was twice an unsuccessful challenger for leader of the Conservative Party in the 1990s. He will be speaking at the Gadson Club.

Sir Graham was elected Chairman of the powerful 1922 Committee in 2010 and was voted backbencher of the year by The Spectator. He is a Member of Parliament for Altrincham and Sale West.

In 2017, Halfon took up his role as Chairman of the Education Select Committee, having attended Cabinet as Deputy Chairman of the Conservative Party under David Cameron. He will be addressing OUCA during their Westminster trip.

As Secretary of State for Housing, Communities, and Local Government, Brokenshire took on his role in April after entering the cabinet in 2016. He will be presenting at Westminster.

Former Leader of the Conservative Party from 2001-2003, Smith served in David Cameron’s cabinet as Secretary of State for Work and Pensions until 2016. He will be speaking at Westminster.

Secretary of State for Work and Pensions, Ms McVey, left the world of television to enter Parliament in 2010 and replaced George Osborne as MP for Tatton in 2017. She will be speaking at Westminster.

Ms Soubry, Member of Parliament for Broxtowe, has risen to prominence recently due to her strong views about Brexit. She will be addressing the Gadson Club.

The grandson of Sir Winston Churchill, Sir Nicholas, serves as a Member of Parliament for Mid Sussex. He has served in Parliament continuously since 1983 and was Minister of State for the Armed Forces under John Major.

Working as the Private Secretary to Margaret Thatcher and John Major, Lord Powell served as a civil servant at the heart of power for the better part of a decade. He also served as the principal foreign policy advisor to the Prime Minister from 1983-1991 – affording him a unique perspective on recent British political history.

Or if you would like something a bit more hands-on and social, join in on the friendly rivalry of the OUCA-OULD Minigolf taking place on November 12th or the OUCA vs. CUCA Football taking place on November 18th. As a member you can also join in on the Think Tanks with CUCA (OUCA’s sister organization at Cambridge), which entails an exciting trip to London to hear from a number of speakers listed above in the heart of Westminster. Or better yet drop in for any number of socials, away days, special dinners, and a Termly Dinner on November 26th. Check OUCA’s Michaelmas 2018 Term Card for a full list.

The Oxford University Labour Club’s (OULC) has been promoting democratic socialism and progressive politics in Oxford for nearly a hundred years. The group is an active campaigning force, having helped their local CLP hold Oxford East in the 2017 General Election with an increased majority of 65.2%, as well as organized campaigning trips to nearby marginals Battersea, Kensington, Hampstead, and Croydon Central. OULC also focuses on taking positive action to promote social justice and equality within universities in addition to the wider Oxford community. They welcome any member of the university who’s interested in the aims and values of the Labour movement. Among the many events taking place this term are a few highlights listed below.

“Michaelmas Term 2018 will bring together the social movements that have played a key role in the transformation of Labour and the huge political upset of 2017. Rejecting a focus on big-name speakers, OULC will seek to give a voice to the grassroots of OULC’s movement.” – Charlotte Austin & Francesca Best, OULC Co-Chairs

This week will feature a panel discussion between city councillors, student activists and a speaker from the Ethical Lettings Agency, which is an organization that offers a free management service and guaranteed rents to Private Landlords in Surrey and South West London since 2012.

The president of the Bakers’ Union, Ian Hodson, will be presenting on the McDonalds #McStrike for £10 an hour alongside OULC’s Co-Chair Charlotte, who used to work as a Deliveroo rider. The strike came about when McDonald’s UK workers made the decision to strike for the first time in UK history, “over the company’s failure to offer them acceptable working conditions, job security or even an affordable living wage,” according to the official press release issued by the Baker’s Food and Allied Workers Union.

Labour Party Chair, Ian Lavery, will be visiting to rally OULC in the campaign to come in addition to speaking about his time as a striking miner. He was a former trade union leader from Northumberland who became the Member of Parliament for Wansbeck as of the 2010 General Election.

These speaker events will be alongside the society’s usual line up of Hot Drinks and Discussion, Liberation Caucus events, pub crawls and door-knocking events. A renewed focus on the cultural life of their movement will see Grime 4 Corbyn visit us and the term culminates as they head to Plush for Dance Kapital: Volume 2.

The Oxford University Liberal Democrats (OULD) are one of the most active student branches of the Liberal Democrats, helping out during elections by leafletting and doorknocking, and they have even stood students as candidates in student wards for the City Council elections. As Oxford covers two Parliamentary constituencies – Oxford East and Oxford West and Abingdon – OULD spend time in both, campaigning against Labour in the former, and against the Conservatives in the latter. Besides the weekly spirited discussions (every Wednesday at 8:15 PM) and Campaigning (every Saturday at 11 AM), a number of speakers will be presenting during the Michaelmas 2018 Term.

“All students at Oxford are more than welcome to come along to any event we host – whether that be a barely-political crewdate, or Spirited Discussions, or even volunteering to campaign with us to see Liberal Democrat councillors, MEPs and MPs elected across the city and further afield.” – Finn Conway, OULD President

Having served as the Member of Parliament for Orkney and Shetland since the 2001 General Election, Alistair Carmichael was the only Scottish MP representing the Liberal Democrats in the House of Commons during the 57th Parliament. Recently, Mr Carmichael was quoted in the Shropshire Star (September 29th, 2018) backing campaigners planning a legal challenge to demand public inquiry into Brexit vote.

Originally a business consultant and trained economist, Sir Ed was elected for the first time in 1997. Since the 2017 General Election, Sir Ed has been the Member of Parliament for Kingston and Surbiton, having previously been MP for the constituency from 1997 to 2015. He also chairs a Community Energy Co-operative Company called Mongose Energy.

A Scottish Liberal Democrat politician, Christine Jardine was elected as the Member of Parliament for Edinburgh West in 2017. Before entering politics, Christine was an Edinburgh based journalist and broadcaster. She recently backed a campaign to ‘Make Blood Cancer Visible’ (The Edinburgh Reporter, September 13th, 2018).

Norman Lamb has been the Member of Parliament for North Norfolk since 2001 and chair of the Science and Technology Select Committee since 2017. In the 2015 Liberal Democrats leadership election he was a candidate. He originally studied Law at Leicester University and eventually focused in employment law. Norman first stood for Parliament in North Norfolk in 1992. His talk will focus on mental health

In addition to these speaker events there will be an Alumni Dinner on November 24th from 7-10:30 PM. As a member, you can also get involved in the Central Oxford Action Day, or the People’s Vote March, or even the Vale of White Horses Action Day. Or maybe joining in for the champagne and socialism crew date is more your speed. OULD hosts charity, speaker, campaigning, and social events throughout each term – so there is something for everyone who wants to get involved.