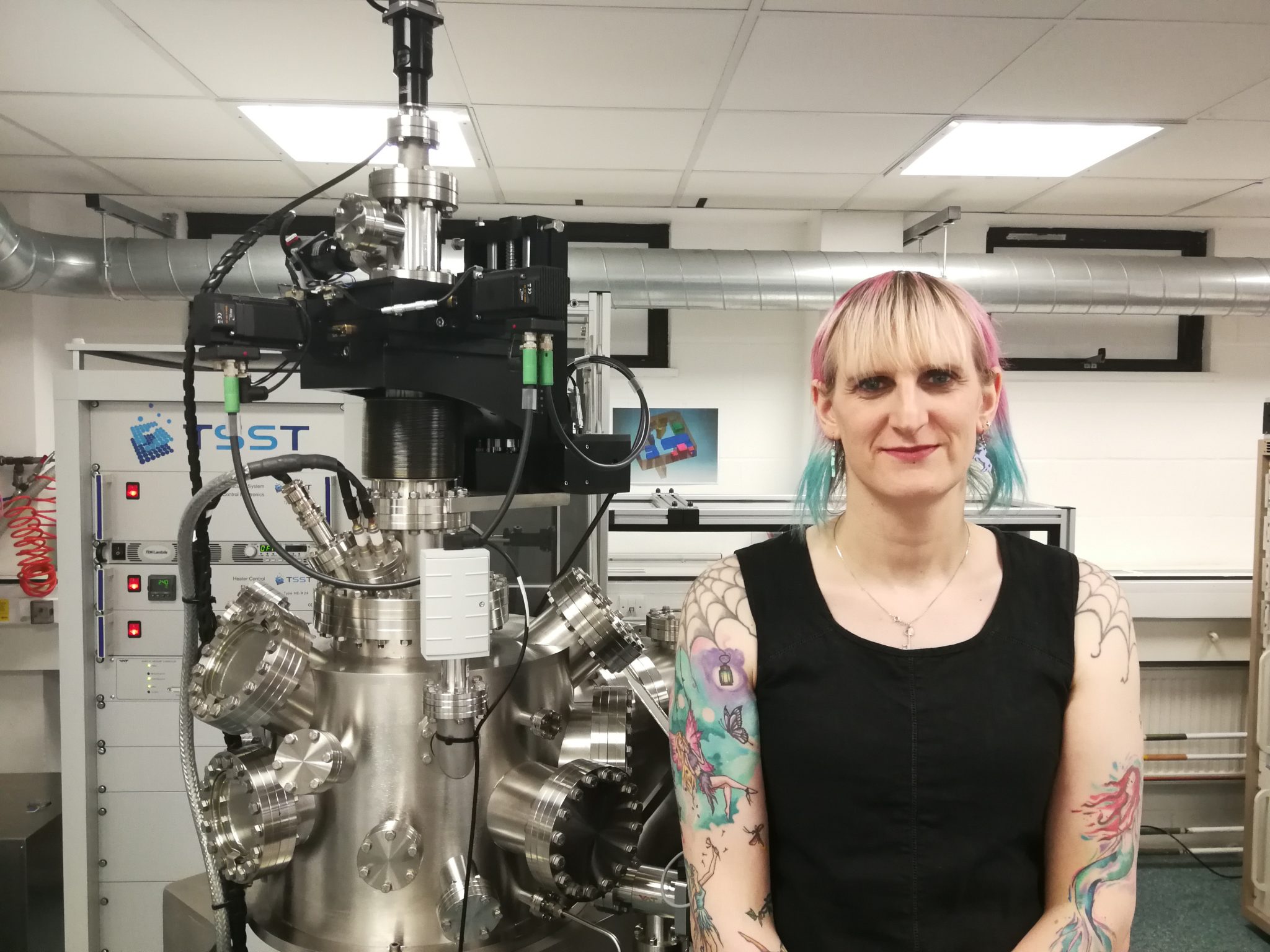 Dr Clara Barker, my interviewee, is a material scientist at Oxford University. Entering the Material Science department, I see straightaway a poster on the doorway, highlighting LGBT+ visibility, and the receptionist wearing a rainbow striped lanyard.

After waiting a couple of minutes Clara comes to fetch me.  Walking down a twisted maze of stairs we reach her office. I follow her into her office and she shuts the door, offers me a coffee, and I gaze around. Clara has My Little Ponies dotted around her computer, and her hair is dyed blue, with tattoos clearly visible. I ask her about them. She says, ‘it started out as a joke, but then well now I’ve got two massive my little pony tattoos.’

Dr Clara Barker works in the Department of Material Science at Oxford University. She manages the Centre for Applied Superconductivity run by the Material and Physics Departments. Clara is also a trans woman, and a prominent LGBT+ campaigner in the University and in Oxfordshire more generally. She is the vice-chair of the LGBT+ Advisory Group at Oxford University, and has been involved in the project ‘Out in Oxford’. She also works in the wider community, running an LGBT+ youth group called TOPAZ and TOPAZ parents, as well as going into schools to speak sometimes on behalf of Stonewall, and sometimes on behalf of Oxford County Council anti-LGBT+ bullying group. Clara is passionate about providing role models for both the LGBT+ community and women in science. In 2017 she became the 795th person to win the Points of Light Award, a daily award given by the Prime Minister to a person who has been an outstanding volunteer in their community.

What was your experience growing up trans?

How did you feel when you transitioned – how did it impact your mental health?

I was super depressed, and I finally decided, yep, ok, I’m going to transition. I just assumed that I was going to have to find a new job. I’d actually signed up to a conversion course to psychology, because I assumed that I couldn’t be a trans scientist. When I did come out, no-one cared, it was very open.

In your experience being perceived as a man and as a woman, do you feel you’ve experienced male privilege?

How visibile is the LGBT community in science?

In thirteen years, I met one gay male scientist. That was all the LGBTI that I’d come across, and I worked in labs worldwide and I’d travelled around a lot! There still weren’t those role models.

As a role-model for LGBT+ people in science, how does it feel to be requested for interviews mostly on the basis of your LGBT+ work, rather than your science?

At the moment I do a lot of talking about being a queer scientist,  but I don’t do that much science at the moment as a queer person. I try to be as open and honest as I can with people – yeah, I’ve had mental health issues, yeah, I’m trans, yeah, I’m from a working class family in Manchester. Sometimes just knowing that there are other people out there who are at all like you is a really important thing. However, I am not the trans voice – I come from a particular background, and I acknowledge that and I say that.

How do you feel about receiving the Points of Light volunteering award from Theresa May, someone whose voting record has in the past been criticised by members of the LGBT+ community?

I saw her give a speech at a garden party at No. 10, and she didn’t shy away from the terrible LGBT report that was released two days earlier. She said that we are letting trans people down. So yes, her history is bad, but what I’m seeing at the moment is promising.’

Do you experience transphobia because of being so open about own own experiences?

Whenever I go on the news or something, I get so much grief on Twitter. I mean, you know, you can get hate forever. But there is always a lot more messages of support, it’s just that those people that are spreading the hate happen to be very loud.

I definitely encounter people who are homophobic and transphobic in the sciences. Definitely. Worse when it comes from academics who try and use academic technicalities to do it.

Have you ever experienced the ‘imposter syndrome’ commonly referenced by the Oxford undergraduate community?

As a woman and as a trans person, I feel like I have to be five times better. I can tell from the actions from the peers in my field that I was good if I think about it, but, you know, when you already struggling, you assume the opposite way.

Do you have any advice for incoming freshers who are worried about fitting in?

It’s all about finding your group, it’s all about getting good support, and its not always easy to find those people straight away. For a very, very long time, I went to a lot of trans meet ups for years and I never actually liked anyone. It was only later I found some nerdy people I was like ‘aha!’, and they accepted me for being trans. You know, I’ve never been to Plush, I go to the Bullingdon and watch bands. In Oxford, I went to LGBT board gamers group, and for me it was board games, not being queer, that was that defining identity.

Do you have any last words for trans or more widely LGBT+ students?