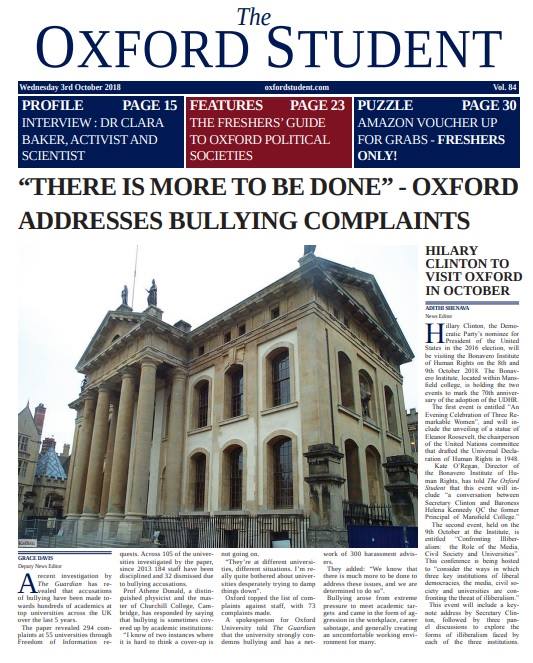 The survy was part of The Oxford Student’s attempts to discover what it could do to further engangement with the student community, and make people actually read us. The results were originally encouraging, when we discovered that 100% of those surveyed had not only heard of The Oxford Student, but read it on a weekly basis. However this study was quickly discredited when it was discovered that all those surveyed were those who were in The Oxford Student’s offices on a Monday morning for laying in the newspaper. When the survey was expanded to include those not directly involved with the paper, the results were drastically different.

Only a third of current students knows that the Oxford SU exists and is separate from their JCRs, MCRs, and the Oxford Union. Of those, only half know of the existence of The Oxford Student, but the vast majoirty of those did not read it. Even those who read it occasionally claimed that they usually only read it because they could not find a copy of Cherwell or because a friend of theirs is on the staff of this newspaper and pushed them to read it. When asked about specific sections, satire came last in terms of readership, with 0% of all students reporting that they read this section.

As you might imagine, this news saddened, but did not suprise, this editor. After all, Cherbadly exists for a reason. However, if any reader wishes to prove that there is a loyal base of people who are not friends with those who write and edit this section (all two of us), then we are open to being proved wrong. Just send some proof by Friday.