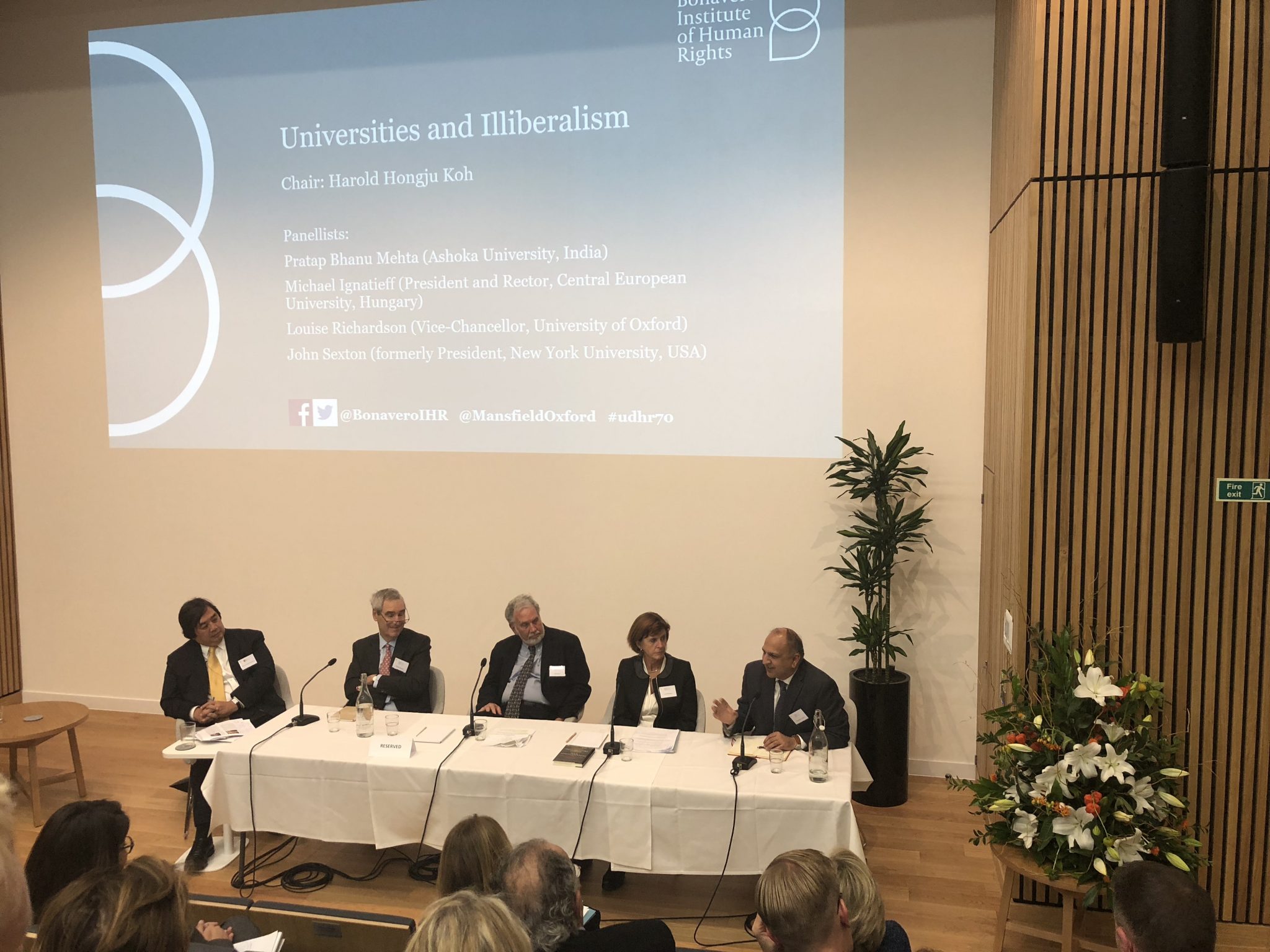 Louise Richardson, Vice-Chancellor of Oxford University, appeared as a panellist during today’s event at the Bonavero Institute of Human Rights. The event was titled “Confronting Illiberalism: The Role of the Media, Civil Society and Universities” and included three panel discussions, one on which the focus was on how universities can face the challenges of illiberalism.

Richardson began by arguing that “university education is the best form of social mobility we have”, conceding that Oxford has “not done as much as we should to reflect the diversity of our community”. However, she followed this by adding that Oxford’s “admissions practice are not nearly as bad as they are painted out to be”.

She added that the University needs to communicate more effectively about how the admissions process works in practice, to ensure that the public’s perception of it is closer to reality. She explained that “pragmatically, if we are seen as unfair, it makes it easier for politicians to use us as a whipping boy”.

In The Times earlier this year, Richardson had said: “Our admissions process is often criticised for being unfair. In my experience it stands out for an entirely different reason; for the extraordinary care taken by our academics, often leading figures in their field, to make it as fair as any system can be.”

During the Q & A session, Kalyna El Kettas, a 2nd year PPE student, asked Richardson whether the alarming statistics of the lack of students from low income families and ethnic minorities is not solely the university’s problem, but reflecting a wider problem relating to decades of austerity and cuts in funding for early education.

Richardson agreed that effective, early education is crucial in resolving the access problem that Oxford faces, and explained how she has lobbied the government in the past to invest further in early education. She also noted that “only 605 black children got 3As at A-level in the UK”, whilst the entry requirements for many Oxford courses are often higher than this standard, explaining that this is one reason why black students are underrepresented within Oxford. Richardson insisted that she was “not blaming the victim” but highlighting how inequality across the UK affects access to Oxford, and emphasised that it only be eradicated through more focus on early education.

Her comments about Oxford’s problem in relation to inclusivity comes shortly after Oxford has been branded as Britain’s least socially inclusive university by The Sunday Times Good University Guide, which showed that more than 60 per cent of its students went to a private or grammar school, while only 1.9% of UK students admitted to Oxford in 2017 were black.

Kalyna El Kettas, who posed the question to Richardson, told The Oxford Student: “ I wanted to know what the university was doing to dismantle elitism at an institutional level. I was pleased to hear the university is lobbying the government over early age education; Oxford tutors can’t accept working class or ethnic minority students if they don’t apply so the work to encourage them needs to be done from early on. The work that needs to be done, however, is already being done by student societies such as the ACS and Access Ambassadors; both of whom lack support from the University itself. The vice chancellor agreed the university should invest in education, so why isn’t it investing in students who are doing the access work many Colleges should be doing?”

Richardson also addressed the issue of Brexit, in relation to how she sees it impacting the future of Oxford. She argued that “Brexit is a symptom of illiberalism” and its attraction reflected a “desire to return to a mythical past”, adding that: “ 64% of our graduate students are from outside the UK and a quarter of Oxford’s academics are from outside the EU.”

She explained how Brexit has meant that the University faces considerable uncertainty, especially in regards to the Erasmus programme and collaborative research with EU academics, as well as the future for Oxford’s European students. If Britain were to “crash” out of the European Union, “it would be a catastrophe for our institution”. She was, however, keen to stress that there is “always a place” for the members of Oxford from non-British backgrounds.

Wisdom from Without: J.S. Verma