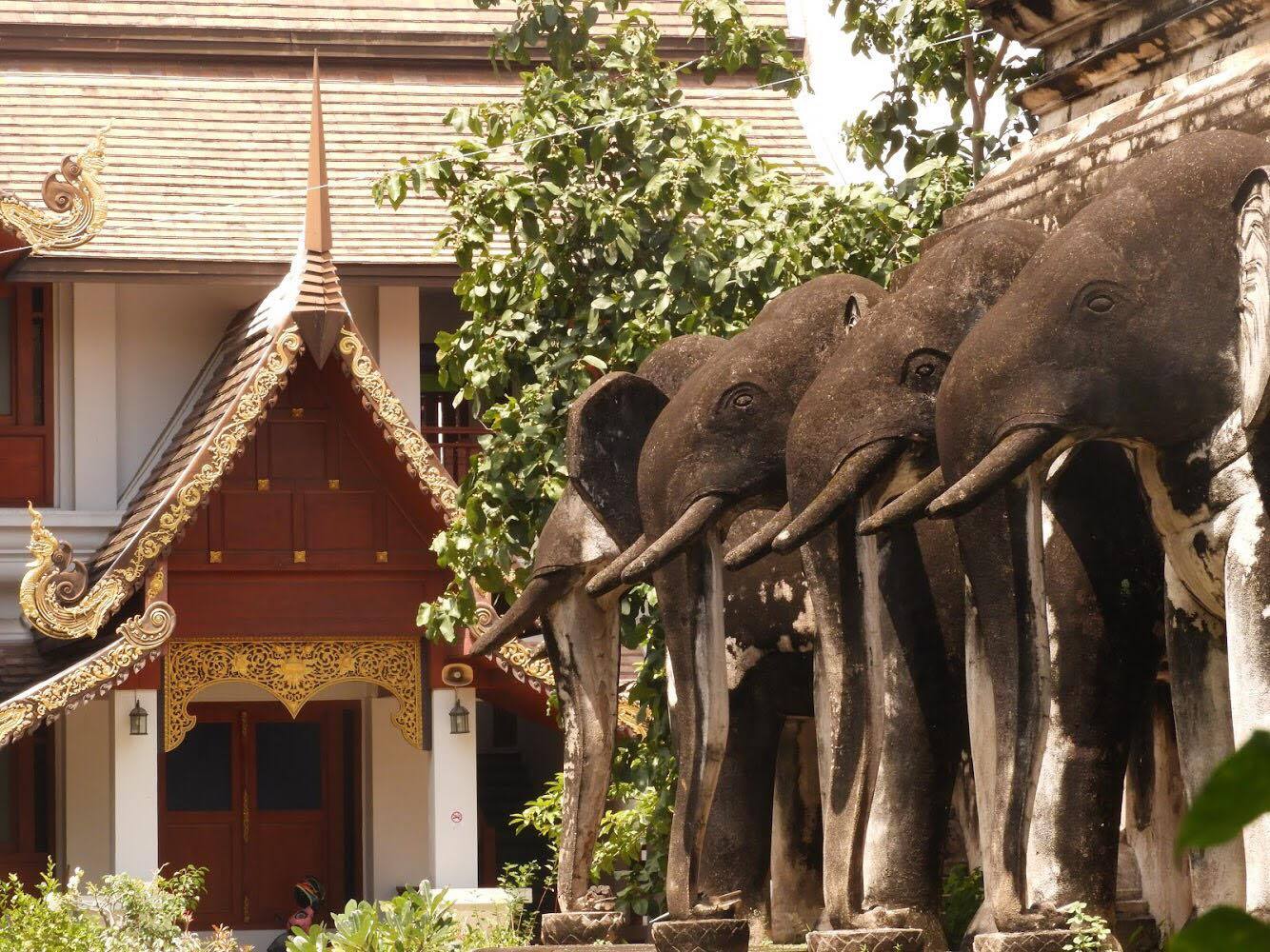 Thailand’s elephant ecotourism – the dark side

When you hear this word a few images usually come to mind: the floating market in Bangkok, beautiful temples, and Asian elephants. A quick google search for popular experiences in Thailand will immediately bring up experiences involving Thailand’s elephants. Elephants are revered by the Thai people and are sacred to Buddhists, which account for 93.6% of the country’s population.

Elephants are depicted at temples, on flags and carved elephants are incredibly popular souvenirs for tourists. Many tourists continue to ride elephants, however, this barbaric practice is becoming less popular as more people are educated of the plight of domesticated elephants. It is ecotourism that people now want. People want to see elephants at peace in sanctuaries, not performing for large crowds. Therefore, the obvious thing to do on my trip to Thailand this September would have been to visit an ethical elephant sanctuary to see these beautiful and majestic creatures myself. This is why I didn’t.

… unless you are trekking deep in the jungles to see these true rare wild elephants, any elephant you see in a park or sanctuary is simply property with no protection of any kind.

I use the word captive purposefully. Thailand doesn’t view their domesticated elephants as anything more than draught animals, used for manual labour. The Beast of Burden Act (1939) classifies elephants in the same category as other draught animals such as horses and donkeys and regards domestic elephants as private property. There are no measures for animal welfare in this Act. In 1992, wild elephants received protection in the Wild Animal Reservation and Protection Act but no protection was given to domestic elephants. Therefore, unless you are trekking deep in the jungles to see these true rare wild elephants, any elephant you see in a park or sanctuary is simply property with no protection of any kind. And they are treated as such.

Many elephant sanctuaries have been established in the last few decades in Thailand as the media has begun to reveal how elephants in shows and circuses are treated. There are still many elephants in Thailand living in horrible conditions, being forced to perform in front of crowds by doing unnatural handstands or taking tourists on rides. Few people understand that riding an elephant is not like riding a horse. The spine of an elephant has tall protrusions of bone sticking upwards, so when they take the heavy weight of a basket and several people on their backs this directly compresses a portion of their spine and causes severe pain. In addition to this pain, domesticating an elephant is a torturous process for the animal. To be successfully broken, an elephant must be trained from an incredibly young age, often as young as three years old. The process itself even has a horrible name: Elephant Crushing. Baby elephants will be put into small wooden crates, similar to how pigs are housed in the intensive farming industry. They are unable to move whilst in this crate as their legs are tied and spread apart to the corners, they will not be fed, and they will be beaten with metal rods by several people whilst they yell and taunt them, and bull-hooks will be used to slash the face and rip the ears of the elephants.

If you take one thing from this article let it be this: all domesticated elephants have gone through this process of torture for the tourism industry.

Elephant trainers, known as Mahouts, have a special bond with their elephant. They were not involved with crushing their elephant. They are the one who brings the tortured elephant its first meal, its first drink, and leads it away from the cage where it was broken. The elephant views the mahout as its saviour. This is simply another form of emotional manipulation of an incredibly intelligent animal that has been ripped from its mother and herd and tortured, to make it incredibly loyal to one human.

However, things appear to be improving for the better. As rides and shows become less common, elephant sanctuaries have popped up in their place. Elephant sanctuaries, such as Elephant Nature Park (ENP) in Chiang Mai, state that they rescue elephants from the cruelties of the tourist industry.

ENP is perhaps the most famous elephant sanctuary in all of Thailand and receives lots of media publicity and therefore lots of tourists visit. The rescued elephants will have a relaxing retirement, living free in large open areas where they are free to interact with tourists on their terms. Elephants at ENP do not give tourists rides and do not perform. Tourism is a very profitable industry. Thailand is third in the list of countries which are most reliant upon the tourism industry, with tourism account for 9.3% of the country’s GDP. Advertising ecotourism to tourists therefore is very profitable for those who run elephant nature parks and reserves, with tourists paying large sums of money for the privilege of feeding and having their photographs taken with the elephants. But simply because a business – yes, let’s remember this is a business – uses the words ‘Sanctuary’, ‘Ecotourism’ and ‘Ethical’ doesn’t mean they are any of those things. In ENP all the elephants are still owned by the same mahouts who previously allowed tourists to ride them day in and day out. These same men are still profiting off these elephants which are still being exploited by the tourist industry.

Several times a day, van loads of tourists will be shuttled from the city of Chiang Mai to ENP. They will feed the elephants and bathe with them in the river. Reviews of ENP state that groups of tourists fed the elephants even when the elephants didn’t want to eat. When the elephants threw the food away rather than eat it, a mahout would stab it in the armpit with a metal screw. If the elephants tried to stop interacting with tourists and leave, they would again be punished. Tourists and mahouts lead the elephants on treks several times a day to and from the river where they will be bathed. Tourists are also explicitly told to surround the elephant while bathing it in the river. Why? If the interactions are under the elephant’s terms, why must they be prevented from leaving and surrounded by groups of loud strangers throwing water over them? Bathing with tourists is an unnatural behaviour that these animals are being forced to do maybe three times a day in these ‘sanctuaries’. Is this any different from making an elephant paint for a crowd or perform?

Would you visit a panda sanctuary and expect to feed, walk, bathe and pose for photographs with endangered pandas?

Only one sanctuary in Thailand can truly claim to be ethical. Elephant Valleys Thailand is a sanctuary in Chiang Rai (125 miles north of Chiang Mai) which supports truly ethical elephant experiences. They do not ride their elephants or make their elephants perform in any way, including bathing with tourists or allowing tourists to feed them. If the elephants wish to take bananas from the tourists they approach designated areas without force. The sanctuary simply allows tourists to go and observe these beautiful creatures as they wander through fields and forests. Asian elephants are an endangered species. Would you visit a panda sanctuary and expect to feed, walk, bathe and pose for photographs with endangered pandas? No! So why are Asian elephants treated so incredibly differently?

Therefore, on my trip to Thailand this September, I did not visit an elephant sanctuary. I did not want to pay towards the continued exploitation of elephants. I instead educated myself about many of the elephant sanctuaries that surround Chiang Mai, Bangkok and Chiang Rai. Though this exploitation is subtler and hidden behind buzzwords such as ‘ethical tourism’, these elephants are still owned and controlled by those who crushed and rode them. As the age of elephant riding comes to an end, those who wish to make money off the backs on innocent creatures will also move with the ages.

Before you hand over your money, stop and think. Are these animals acting under their own will or are they still being coerced into interacting with you?