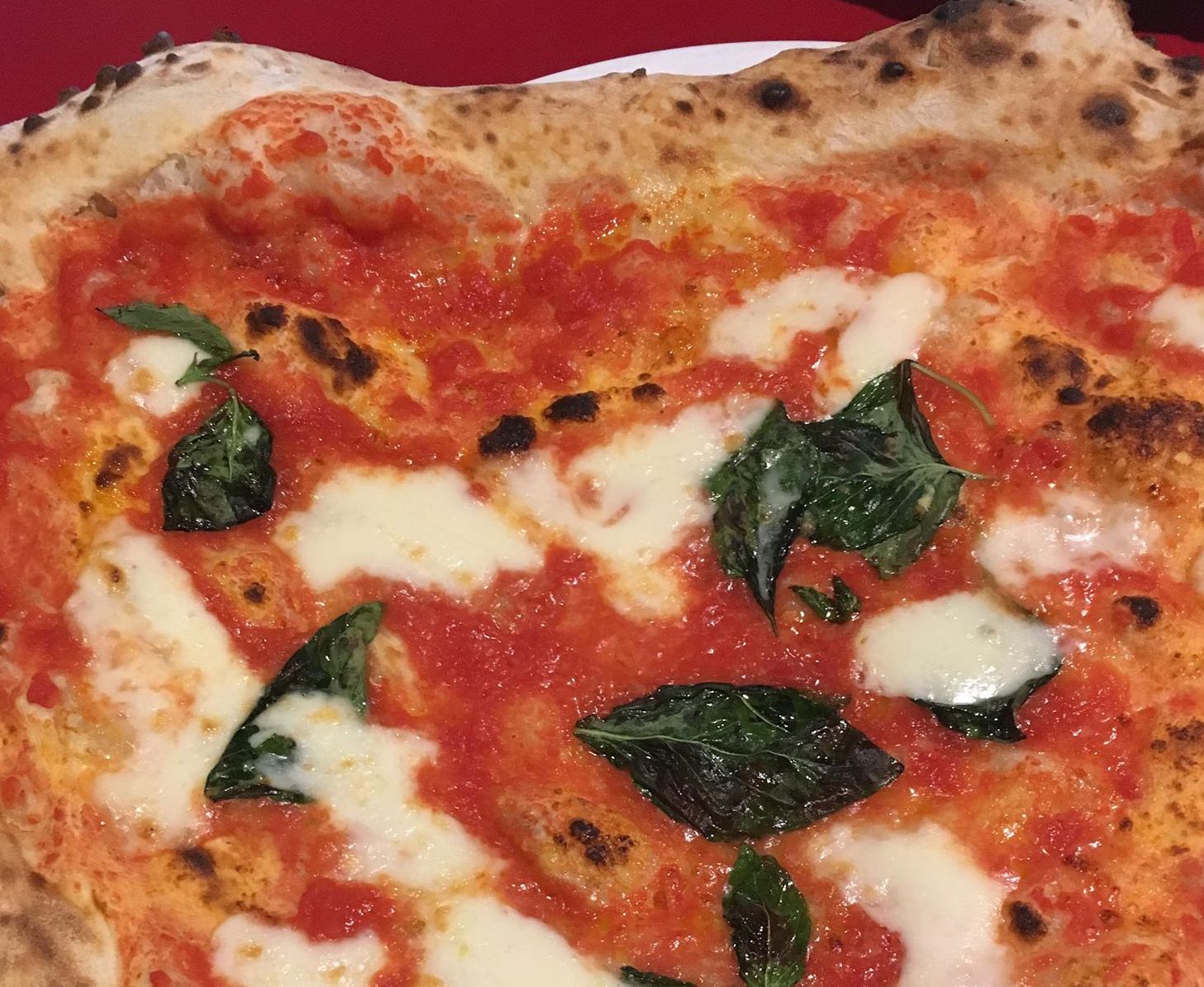 The mark of any pizzeria is determined by the quality of its Margherita. Though it has very few components, each has to be delivered perfectly in order to create a dish which, in its colours, flavours, and royal name, represents Italy. Pizza Pilgrims is all about authenticity, importing both chefs and ingredients from Naples, though it was founded by two Britons whose love for pizza drove them to make a pilgrimage up Italy in order to understand the art which goes into making one of the most popular, and most frequently bastardised, dishes in the world.

The interior is a wonderful fusion of a trattoria and an arcade, with the classic red and white tablecloths sitting alongside a new-fangled machine for playing ‘Pac-Man’. However, to avoid eaters forgetting that they are in an Italian restaurant, the walls are adorned with film posters in Italian, and the green, white and red colour scheme made it abundantly clear that the food I was about to eat would be as the Italians intended. I looked at the menu: not a slither of pineapple in sight. Like a magpie with a love of bread, I was drawn to the television screen showing live footage of the chefs skilfully manipulating the dough in order to create the base of what would prove to be one of the best pizzas I have ever consumed.

I ordered a Margherita with ‘arancini rosso’ (tomato risotto balls) and my feast of carbohydrates arrived within ten minutes, which was apparently late because the chefs were not happy with the first pizza, such was their desire to deliver perfection. What arrived on my table was more beautiful than any baroque painting. The wood-fired oven had breathed life into the slow proved dough to produce a leopard spotted crust, and the smell was truly astounding – like the wafts of fragrance outside a Subway, but ten times better. I could already tell that this wasn’t just a pizza: this was my destiny.

I cut a slice, folded it, and took a bite. I was first hit by the aromatic basil which danced through my taste buds like Maradona through the defences of Italy to win Napoli’s first Scudetto in 1987. Then the fresh tomato flavour greeted me, illuminating my mouth like the tenebrism of a Caravaggio painting. This was the purest tomato I had ever tasted: no salt, no pepper, no garlic – just the vibrant red pulp of the fruit. The cheese wasn’t just ordinary mozzarella, it was fior di latte – a cow’s milk cheese which is beautifully soft. It was also seasoned with parmesan, lending a slightly salty note, whilst not obscuring the other flavours.

“I was first hit by the aromatic basil which danced through my taste buds like Maradona through the defences of Italy to win Napoli’s first Scudetto in 1987.”

However, as much as I love cheese, tomatoes, and basil – in that order – what made the pizza truly exquisite was the dough. Light, crispy, chewy – this was no £1 frozen piece of cardboard with cheese on top. Dipping sauces are provided, but the crust is so good that I don’t think they’re necessary. Equally, the arancini were also very tasty, with the crispy coating and oozing centre contrasting beautifully , though I feel like the limelight was firmly taken by the pizza. £6.95 may seem a little expensive for a Margherita, but I think that if you’re a student going out for food in Oxford, this should be near top of your list.

Pizza Pilgrims are making an offer which would be rather difficult to refuse, in so much as they are hiring a student pizza taster. For £1500 a year, one unfortunate soul will have to go to Pizza Pilgrims once a week with their friends and be given delicious, nourishing pizza. Applications via the website are open until October 26, which will then be followed by a video application, and finally culminating in a gladiatorial showdown between the finalists on October 29. This will involve making pizza, making pizza boxes, delivering pizza and, of course, eating pizza. If the prospect of being paid to become a pizza-ultra doesn’t appeal to you, but you want pizza (and to be a spectator), tickets are available for £10.