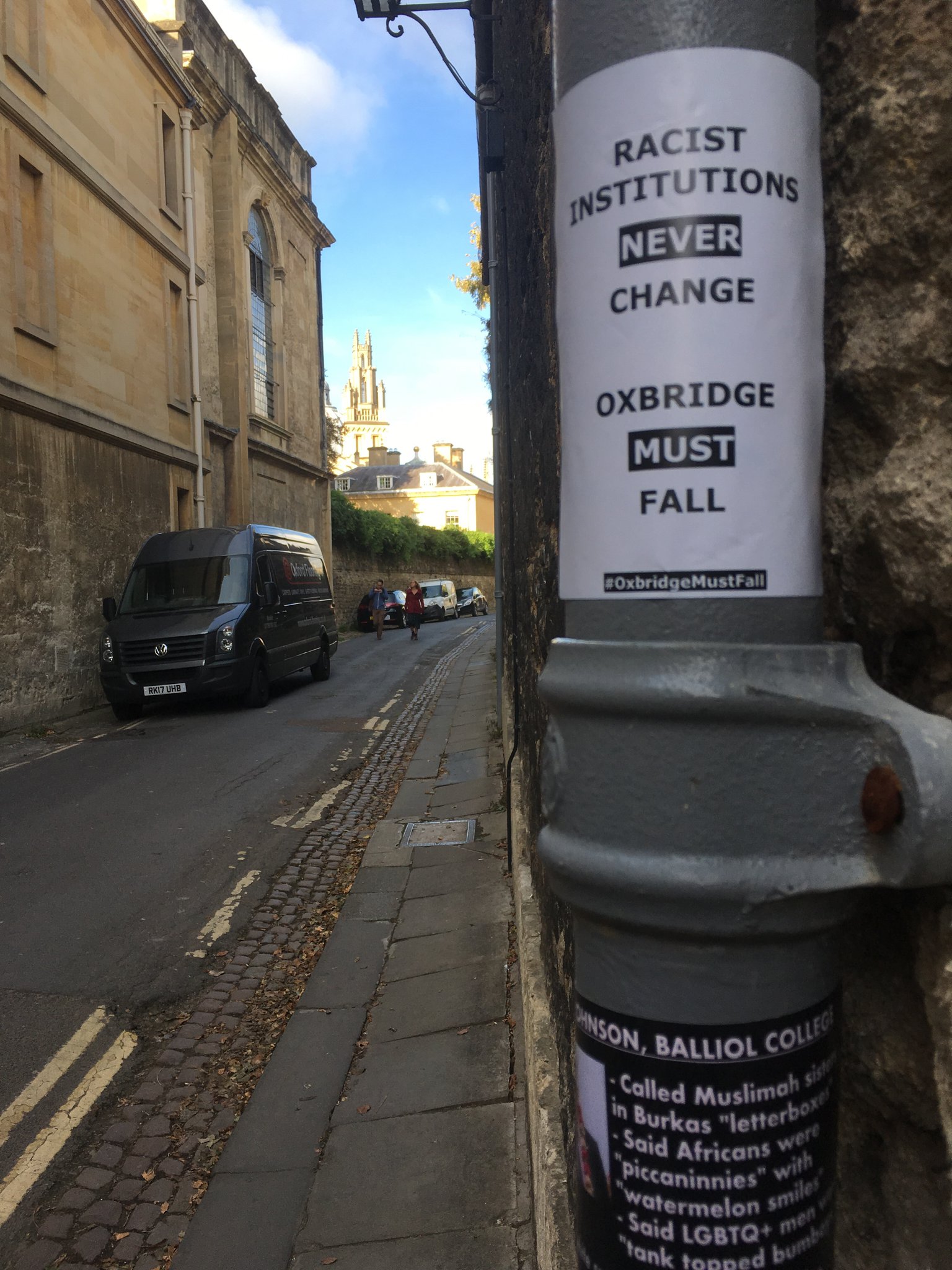 Anyone strolling around town with a keen eye last week may have noticed the latest poster campaign to occupy Oxford’s signposts and blank spaces. Signs and stickers have filled the city, declaring that “Oxbridge Must Fall”.

The Oxford Student obtained an interview with the anonymous organisers behind the campaign, who have called for the “end [of] Oxford and Cambridge Universities, in a liberative act of literal deconstruction”.

The group identify themselves as “an intellectual guerrilla movement, employing the ‘foco’ tactics of vanguardism as detailed by Régis Debray.” Debray is a French philosopher and Marxist political activist who was closely associated with the revolutionary Che Guevara.

The members of this movement remain strictly anonymous. A spokesperson within the movement explained to The OxStu that just “as a general would not reveal his army, so we will not reveal our numbers. This is especially true when we exist in an environment of white supremacy, where British soldiers happily pose for selfies with a noted fascist like Tommy Robinson.

“We have active groups present at both universities.”

“To reveal ourselves would be dangerous. Let us just say that we have active groups present at both universities.”

Oxbridge Must Fall believe that “Oxford and Cambridge are breeding grounds for white supremacy” as “many of the colleges were built on slave money extracted through the suffering of millions of people of colour […] above all, it is the intellectual pillars of white supremacy which hold up the dreaming spires of these universities.”

According to the movement, Oxbridge’s alumni demonstrate its institutional racism. Notable examples named to The OxStu include the transportation of slaves by William Henry Drayton (Balliol, 1761) and the deportation of the Windrush generation under the government of Theresa May (St Hugh’s, 1974). Oxbridge Must Fall also points to recent admissions data which has shown one in four Oxford colleges failed to admit a single black British student each between 2015 and 2017.

One set of posters claimed “Racist institutions never change. Oxbridge must fall”. Another poster, spotted on Parks Road, featured a picture of former Foreign Secretary and Balliol graduate Boris Johnson and alluded to his comments about veiled women looking like “letterboxes” and “piccaninnies” with “watermelon smiles”, before declaring: “End white supremacy; end Oxbridge”.

The stated purpose of the campaign is “to raise the consciousness of the oppressed” as “many people do not even realise the fetters that have been placed over their minds.”

“On the national stage we see brave writers of colour like Professor Kehinde Andrews, Afua Hirsh, and Reni Eddo-Lodge who have reached out to people of colour and forced white allies to confront their own privilege. But their work has had staggeringly little effect on the bastions of privilege that are Oxford and Cambridge… We call on those who have escaped the white oppression of Oxbridge, like Diane Abbot (Newnham College, Cambridge) to denounce them”.

“When we say ‘Oxbridge must fall’ we mean that we want Oxford and Cambridge to stop existing. The only acceptable alternative to this would be to convert the colleges into spaces for the self-education of people of colour. The Oxbridge legacy of oppression is so inseparable from their modern-day function that there can be no other compromise.”