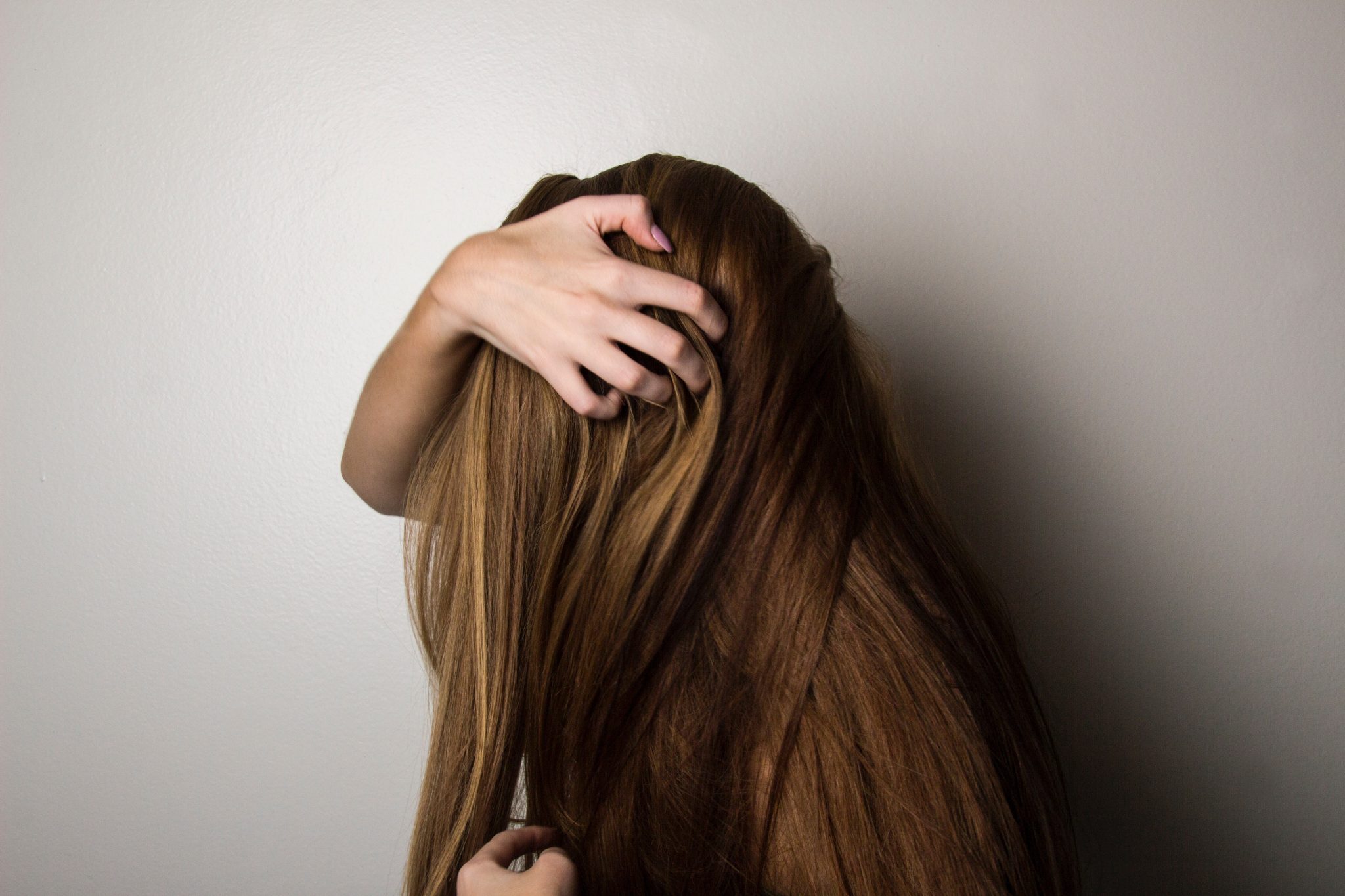 Hair wasn’t something I paid much attention to as a child. I often got annoyed when my mum brushed it before school or friend’s birthday parties. It was nice to style, when I could be bothered (which wasn’t often).

I never truly appreciated those thousands of strands until they all came loose during my chemotherapy treatment for a brain tumour. I certainly appreciated the idea of hair more after all of the hair cells on my head were killed during my radiotherapy treatment. About to transition from my primary school to an all girls’ school, I hadn’t realised the importance of hair until I was posed with a bombardment of thick, perfectly cultivated styles all around me.

If I’m honest, I was irritated by any hair-related complaint voiced by another female student during the first couple of years after treatment. “My hair’s too frizzy”. “My fringe doesn’t look right”. “I wish my hair was curly”.

“Why can’t you just be grateful that you have any hair at all?”, my younger self thought.

However, a recent image in a September issue of The Times brought the subject of hair back to my attention. It was a picture of a group of women lined up side by side, in identical blazers and shades. It took me another few glances to realise that all of these women also had the same long hairstyles. The caption beneath read: “Wives and girlfriends of the Europe team that aims to regain the Ryder Cup from the United States. The contest, in Paris, starts today”. Aside from the questionable practice of this traditional routine, I wondered why long hair has remained such a coveted idea in society.

After ordering the older generation to conform to this greater maturity, the mention of a “youthful vibe” feels particularly patronising and defeatist.

The wig I bought following my first session of chemotherapy was a medium-length bob. It was purchased at a posh place an hour or so outside my town. I didn’t have any knowledge of where to buy wigs at the time, so this one ended up being pretty bouffant and exaggerated, but at least it was something. My next wig was also a bob, and had a much better quality and style than the previous one. I never considered at the time why I favoured these instead of longer wigs, but I guess they just seemed practical and comfortable.

I only started buying longer wigs later on in secondary school, and I don’t think I was even conscious that it was a decision of fashion or style. Maybe I just wanted to experiment, or perhaps I was influenced by advertising, but I wasn’t really aware of either of these factors when I bought them.

From general fashion trends that I’ve seen on the internet recently, there seems to be a link between age and hair length. After googling ‘haircuts for older women’, I was initially met by Arshiya Syeda’s dictatorial statement on stylecraze.com: “They [older women] must learn to embrace styles that are more mature and elegant but still have a youthful vibe to them”. After ordering the older generation to conform to this greater maturity, the mention of a “youthful vibe” feels particularly patronising and defeatist. The underlying voice comes across to me as something like, “Hey, you’re not allowed to have ‘fashionable’ long hair anymore, but you can maintain some dignity with a short haircut!”. Phrases aimed at older women such as maintaining a “youthful charm” don’t make sense. If longer hair is more favourable with youthful women, why does a shorter haircut have a more youthful aesthetic?

Another writer on cutediyprojects.com remarks that “after a while taking care of your long hair can become a burden, and can actually make you look older”. The comment seems to suggest that older woman instantly become incapable of maintaining their locks, as if they suddenly can’t pick up a brush or wash their hair in a shower or bath. The fundamental idea of a shorter, more ‘modest’ haircut in later age comes across as an incredibly depressing cultural view. The irritating meaninglessness of maturity or modesty in the first place only exasperates the ideology of this tradition.

More recently, I’ve found the virtues of wearing no wig at all. When I’m running or rowing at the gym, it’s much more practical to wear nothing on the head.

The search term ‘haircuts for younger women’ brought up pretty expected results.  Julyne Derrick on liveabout.com recommends experimenting with a shorter cut when you’re young, but warns against the wrong short cut, as “what you don’t want to look like is a stock “mom” character”. Apparently that’s a thing. Although a fair number of websites mentioned the short pixie cut as a stylish cut for younger women, these are often mentioned under terms such as a ‘soft’ cut. ‘Heavy’ cuts seem to be reserved for long hairstyles, and adjectives like ‘luscious’ or ‘luxurious’ come up quite frequently. The idea of great amounts of hair symbolising grandeur as opposed to shorter hair seems particularly strange, but these ideas clearly sell when it comes to selling fashion products or clothing.

After finding a great establishment that sold wigs near my town, I was then exposed to a variety of different hairpieces on display. Hair colours also became an important idea in my mind. Not only from the point of view of what hair colours I thought might be suitable for myself, but also for older patients with alopecia or who had lost hair through cancer treatment. If they had the opportunity to choose a dark brown wig over a grey or white wig, would they choose the former option for the sake of tradition, or would they experiment with different, more ‘youthful’ hair colours?

My initial colour scheme choices stuck strictly to my original brunette hair colour, but over time I’ve gone with blonde colours, darker brown, ginger, and even a more grey style. Even though I no longer have the opportunity to have my own hair to brush and get annoyed with my own hair like I used to, I have the novelty of a range of hairstyles that I can put on and take off at will. Although it’s nice to spend a whole day in a fancy hairstyle and feel natural amongst everyone else, it’s even nicer to take the wig off at the end of the day and relax.

More recently, I’ve found the virtues of wearing no wig at all. When I’m running or rowing at the gym, it’s much more practical to wear nothing on the head. I get less overheated, and I don’t have an annoying fringe in front of my face. And often I just don’t feel the need when I’m going out for a quick shop. Although wigs remain important in my daily life, it’s sometimes refreshing to walk outside with no hair at all.

During a history of art project I completed a few years ago, I came across what is now one of my favourite photographs; Sam Taylor Johnson’s ‘Self-portrait in Single-Breasted Suit with Hare’, released in 2001 when the artist was 34 old. At first glance, it simply depicts Taylor-Johnson in a suit, holding a hare in her right hand. If we read further into the image, however, we also see that ‘hare’ refers not only to the stuffed animal but also to Taylor-Johnson’s hair loss during chemotherapy for breast cancer.

I usually wear long wigs on special occasions, and I wonder if I’m still influenced by the Western traditions of long hair as something to be particularly admired.

I loved the image not only because of the symbolism and Taylor-Johnson’s defiant stance, but I think also because of her short hairstyle. There’s nothing inherently wrong with having long hair in younger age, of course, but I found the picture to be a refreshing change from the usual conformity to long hairstyle/young woman trend. It certainly seems like a more daring composition than the Ryder Cup Wives photo.

Following roughly nine years since treatment, my wig collection is now pretty respectable, comprising various colours. While I’ve got a few long wigs, the majority are either bobs or very short ‘pixie’ cut hairstyles. There’s lots of downsides about having no hair, but I’ve also got the unique opportunity to switch between short and long wigs at will. While I was irritated by brushing my hair as a child, now I can just take off a wig and brush it without the painful pulling during each stroke. I usually wear long wigs on special occasions, and I wonder if I’m still influenced by the Western traditions of long hair as something to be particularly admired. Either way though, I doubt I’ll be swayed in any particular direction as my wig collection continues to grow.