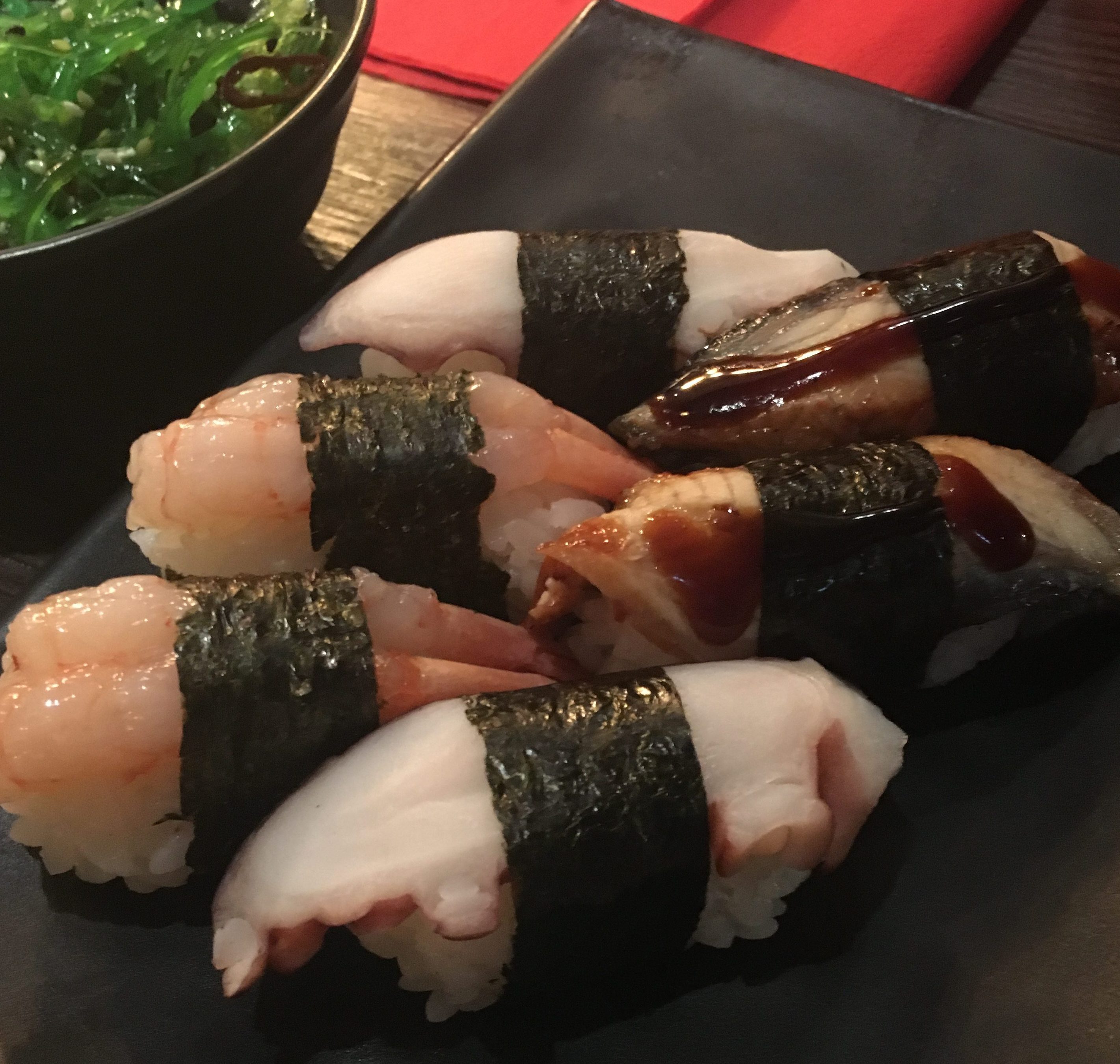 Until recently, I foolishly assumed that once you go beyond Oxford Castle there is just the train station and then a blank space on the map labelled ‘here be dragons’. However, it turns out instead that here be affordable Japanese food. Inside, Sushimania is very modern and very stylish, though if you had any doubts as to whether you were in a Japanese restaurant, the wall of sake barrels should give it away, as should the lack of knives or forks, or indeed the fact that it is called ‘Sushimania’. As nice as the interior is, it is somewhat tarnished by the TV screens showing garish music videos from the 2000s and the accompanying terrible music which, and I know this makes me sound like an old man, detracts from what is otherwise a nice atmosphere.

The ordering system is somewhat confusing to an imbecile such as myself, but effectively you get a two-sided menu, and you select six dishes from each side. £16.80 per person may seem rather steep, but you are provided with a veritable banquet of Japanese fodder, and at lunchtime (or after 10 pm, but even my appetite is not that insatiable) it’s half price. The variety of dishes on offer is certainly impressive, and so myself and a colleague I had persuaded to dine with me that evening (the food was free) selected a plethora of delights.

Within moments the friendly staff were at our table to deliver plate after plate of food. First to arrive was the seaweed salad, which was one of the best parts of the meal. Though very simple, the inclusion of sesame seeds to add texture and a wonderful aroma meant that it was no ordinary bowl of green matter. I ate the entire bowl by myself. Next came some crunchy and very intense pickles which I used as a sort of palate cleanser between dishes, though I have no idea if that was correct. Tempura oysters won’t be if you don’t like seafood, but I very much do, and few things can beat a crisp shell of batter around what is effectively a bag of brine. If you prefer your food to be encased in a wrapper rather than batter, then the gyoza dumplings filled with chicken are a good bet. These were crispy and succulent, far better than the ones you can get in certain Japanese-themed fast food restaurants. The beef kushiyaki (skewers) were nice, and the meat was still juicy, but the syrupy glaze on the beef was too sweet for my tastes, and also those of my colleague, and slightly overpowered the beef.

“It made a nice change to have the sushi brought to the table rather than watching an unloved roll dejectedly crawling along a conveyor belt.”

It’s not exactly surprising that Sushimania does good sushi: the spicy tuna hosomaki melted in my mouth, and the prawn katsu uramaki was also tasty, with the slight greasiness of the fried prawn working very well with the slither of avocado next to it, my only complaint would be that there was too much rice around the filling to make it a convenient mouthful. The raw sweet prawn nigiri had a very subtle flavour and was very tender, and, as an enthusiast of raw things, I enjoyed it. I was a little less enthusiastic about the octopus. My favourite delicacy is grilled octopus, so I suppose it was inevitable that I would be disappointed by uncooked cephalopod. I found it chewy, though I think that is very much the territory you are in with raw octopus. However, I was not disappointed whatsoever by the grilled eel nigiri: its slight smokiness seized control of my tastebuds like Tokugawa Ieyasu seized control to become Shogun. It made a nice change to have the sushi brought to the table rather than watching an unloved roll dejectedly crawling along a conveyor belt.

The meal presented the perfect opportunity for me to devour a variety of dishes. Sushimania is a very good place to introduce you to the cuisine of the Land of the Rising Sun. I doubt that a student will be able to realistically afford better sushi in Oxford and, despite the music, it was a very pleasant dinner.