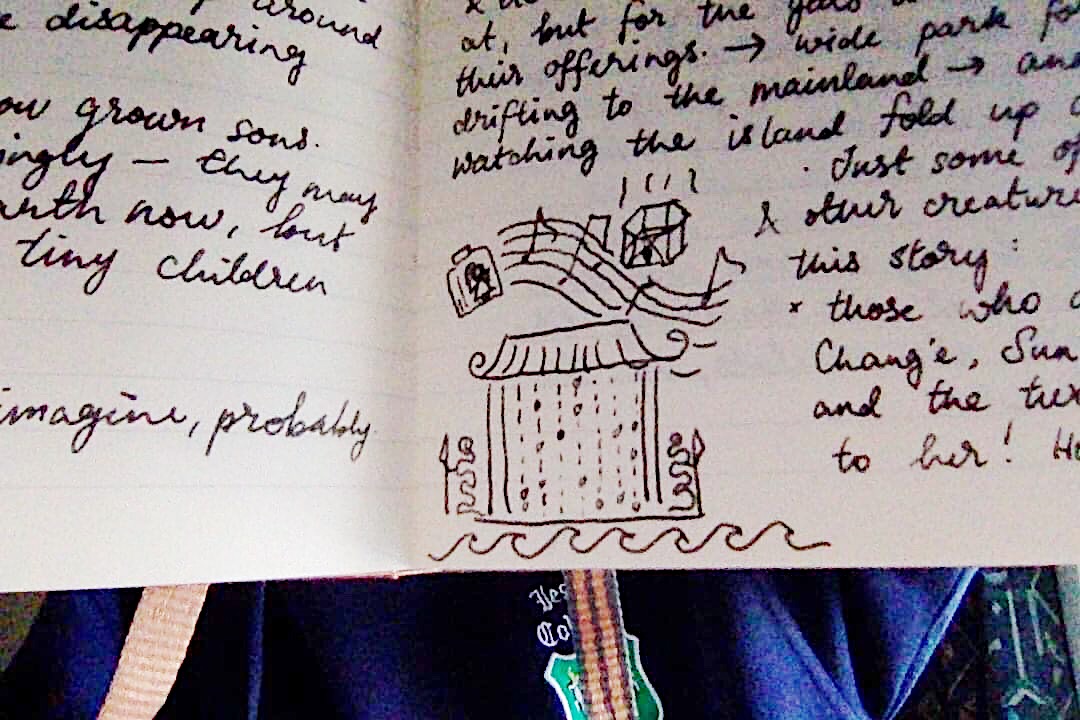 Scenes from The Night Market Across The Sea

The market unfurled before our eyes fully formed, like a lotus-flower carefully choosing its time to bloom, each movement deliberate and painstakingly carried out. I had never seen something held together by silk and metal move like a living creature, and stared in open wonder at it, which made her laugh as she slapped me heartily on the back.

“Close your mouth, or we’ll get caught,” she said, patting my jaw shut. We sat on the edge of a cliff, watching the first rush of customers slowly file into the open gates. A melody that tasted like lightly spiced tea floated towards us on the wind, and in one sudden, swift motion, she grabbed my hand and pulled me down the winding cliff path and onto the wooden bridge which led to the entrance of the market. Clusters of lotuses floated beside the bridge, and I marvelled at their ability to grow in the briny sea, as well as the multitude of colours they presented themselves in, all pinks and blues, reds and purples.

As we were caught in the crush of bodies that clamoured to be let in, my friend and guide whispered instructions that I only half heard— keep your head down, let me do the talking—did you bring the gift I told you to?—don’t stare too long at anyone, and for goodness sake try not to make eye contact— because I was too busy looking at the others around me. From the cliff, they looked like any other human being, not at all unlike my guide and I, but when you looked more closely, they took on stranger qualities. Near me, a woman covered a sneeze with one hand while holding two baskets in two other hands and balancing a colourful earthenware pot in another. A man much taller than I pushed his way past us impatiently, his boar head bristling  furiously in a way that was much too large for his body, only to be hissed at by my unforgiving companion and made to retreat to the back of the line.

On the gates were carved the twelve animals of the zodiac, and as we approached, I thought I saw a glint of life in the gems they had for eyes, one that simultaneously thrilled and terrified in equal parts. I wasn’t sure, but I could swear that the milky-jade rabbit, guardian of my zodiac sign, lifted its head and winked solemnly at me, but when I looked back again, it was as still as a statue could be.

I hadn’t actually heard a voice, but it echoed in my head all the same, a ringing force that nearly brought me to my knees. My head swivelled round in a frantic search for my friend, frozen to the spot as other patrons milled around me, ignoring the fact that I was standing stock-still in the middle of the entrance, behaving as if they couldn’t see me at all.

“Well, we couldn’t get past them, but we tried,” she shrugged. “Get the gift ready.”

A blue haze that obscured everything else descended, and two horned demons towered over us as my body shook with fear. My friend looked bored, crossing her arms and waiting patiently as they made their way towards us, one a violent shade of red with yellow sapphire eyes that shone with the light of the sun, and the other green with red eyes that foretold disaster. I bowed my head, unwilling to let them see my face, and they came to a halt before us.

“You know the rules, trickster. No humans can pass the border of the night market, and there are no exceptions.”

“We all know that if that were true, there would be no one left to provide offerings to you, since no mortal would know that you existed otherwise,” my friend scoffed. “Name your price.”

“Our only price is his life,” the red demon hissed.

She reached carelessly into my pocket and pulled out a string of milk teeth that she had carefully knotted the day before with red string dipped into holy water, making sure all 20 of them were equal lengths apart and tied off with a circlet. Now, she flung them up into the air as if they were disposable and utterly unimportant, before catching them and letting the teeth dangle from her fingers.

“What about these?” She tossed them at the green demon, who caught it with a taloned hand. “That’s far more than you two deserve anyway. You can split it perfectly, I don’t care how you do it.”

The demons looked at each other, and seemed to come together in perfect accord after a quick, unspoken conversation.

“Fine,” they backed off slowly, and I watched them retreat, finally gathering the courage to stand up again. The red demon pointed a sharpened claw at me, and I shrank back slightly, not expecting to be addressed directly. “You’re lucky the water goddess likes you.”

As if in response to that remark, the sea around the market roared up on both sides, froth spitting upwards like a cloud of fireworks. The sea’s impromptu celebration of our right to entry cleared the blue mist, and then we were standing in front of the entrance again, the crowd noticeably thinner.

When we stepped over the threshold, bright sparks spun and flickered around us in a constant stream of colour. My eyes struggled to catch up with everything, visually drunk on our surroundings, which resembled a normal market at home, but larger and much stranger. Nine golden orbs hovered above the entire market, providing soft light. I felt I could spend days trawling through the stalls and yet would never be able to fully plunder its depths.

Bright red lanterns swung carelessly in the sea breeze, and I was suddenly accosted by a gaggle of flying, cherubic creatures who clamoured for me to look at their baskets full of goods, my fingers reaching hesitantly for them before my friend pulled me away, waving irritably at the winged things before I had time to do anything but glance at their shiny wares: fruits as lustrous and glossy as pearls, and vegetables that gleamed like dim stars under the swaying lights.

“Don’t even think about touching those,” she warned me. “They come with a price far higher than you are willing to pay.”

Competing scents of spices and sweets wafted through the air as she led us to a walkway further to the left. As we moved past a multitude of stalls, I caught sight of a deathly pale woman ladling ox-blood soup into plastic containers for takeaway, licking her elongated canines as she taste-tested the soup bubbling merrily away in her iron pot. At another stall, a pleasant-looking, rotund man dressed in a golden robe folded dumplings- his hands a blur of flesh and dumpling skin – but still managed to gossip with his customers as if his hands were no longer part of his body, but were an entirely separate, self-functioning entity…

We were caught again in the crush of people moving out of the market laden with their purchases, a few sleepy kids propped on comforting parental shoulders, lights dimming to let the stars shine through. Walking up to the spot where we had first watched the market unfurl, I saw the gleaming zodiac doors shut firmly, the animals’ twinkling jewelled eyes dulling into darkness.

The market closed up like fingers curling into a palm, the machinations of silk and metal shrinking inwards on itself, surrounding sea churning higher and higher around it like a whirlpool, waves swallowing the flower whole, and covering us in sea-spray so violent that by the time I lowered my arm from shielding my face from the salt, it was completely gone.