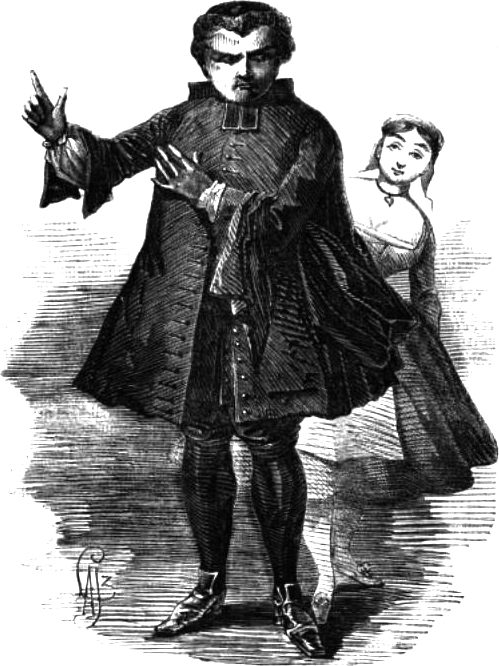 ‘Tartuffe’ review: can Molière be funny in English?

Comedy – perhaps more than any other genre – is cultural.

Part of this comes from a shared comedic heritage. Brits know, inherently, that the phrase ‘This time next year, we’ll be millionaires!’ is rooted in classic British humour. Monty Python, Blackadder, Fawlty Towers and Peep Show form part of the canon of British entertainment, and all of them are characterised by their distinct and sometimes uncomfortably cringe-inducing humour. British comedy is built on a famously dry, sarcastic, and often self-depreciating patrimony. Finding humour in these qualities is something that distinguishes a person as British: our individual tastes in comedy may vary, but the national sense of humour nonetheless forms part of our identity. It is a reflection, too, of current trends and transient values. Part of comedy runs deeper into cultural attitudes and etiquette. Sue Holderness, who played Marlene in Only Fools and Horses, remarked recently that much of the definitive 1980s sitcom would not have made the cut in today’s television world, particularly in light of the #MeToo movement.

This being the case, how can we transfer laughter from another century to our own? Critics suggest that the ‘Porter Scene’ in Shakespeare’s Macbeth was intended to provide some light comic relief from the gravity of the play’s central tragedy. It has not aged well. It is crude, it relies on now-unintelligible drunken slang, and it is thoroughly unfunny. Where Elizabethan crowds would have roared with laughter, the modern audience can only manage a disapproving titter.

A London production of Molière’s classic, Tartuffe, undertook a difficult task over the summer. Not only did the producers have to render 17th century bourgeoise French comedy appealing – and, crucially, funny – but they also faced the challenge of making it accessible to an English audience. The most direct route is through translation. But all literature students are aware of the dangers of losing the humour in one language when trying to convert it into another: idioms, word play, timing and connotations are all shifted. In an effort to maintain more of the original humour, Gerald Garutti opted to adapt a ‘bilingual’ performance. Approximately half of the lines were delivered in English; the rest remained in the original French while subtitles appeared on a board above the stage. The cast switched seamlessly between the two languages, often within the same scene and sometimes within the same conversation.

Bilingual theatre is something of a growing trend. Though Garutti’s Tartuffe was billed as the first production of its kind in the West End, English-Spanish productions of Lorca’s Bodas de Sangre (‘Blood Wedding’) have appeared in the United States. Even Alice in Wonderland, a quintessentially English piece of literature, has been adapted into bilingual performances. Theatre companies like London-based Tricolore specialise in developing original bilingual productions in English and Italian. Many of these performances are intended for children. It’s easy to see the appeal: at least some of the original language and rhythm are maintained. The audience has the sense that the production they are witnessing is ‘closer’ to the author’s vision. It’s also convenient for language learners who don’t always have the option of seeing a play in its original form: I was only interested in the production at all because I thought it would aid my aural comprehension in French. For parents, it’s a fun and engaging way to help children absorb foreign words and culture. On the surface, it seems the perfect bridge between the cultural and comedic qualities of different languages.

Does it work? On the one hand, it was wonderful to hear Molière’s rhyming French verse spoken aloud in a London theatre. It could be argued that the original rhythm and rhyme, when combined with the actors’ performance, deliver what the author intended: any other format would be a conscious drive away from the source material. However, the audience members who weren’t totally comfortable with 16th century French were left at the mercy of the subtitles. It becomes very easy to ignore the spoken language when it is merely background noise. Hence, the French vocals are, for most English spectators, largely pointless: it may as well have been entirely performed in English. Moreover, the audience members reliant on the subtitles had to divide their attention between watching the on-stage action and reading the translation. While the cast’s domination of both languages was extraordinarily impressive, the constant changes were unsettling. The format of the play meant that it was difficult for the audience to concentrate on what was being said, as well as what was being acted, and as a result they appreciated and understood the play much less than they would have if it were simply performed in English.

… Garutti is not the first to make the comparison between the 45th president of America and Molière’s famous prevaricator. Another popular English translation of the play renders Tartuffe The Imposter…

Tartuffe remains one of Molière’s most popular plays. As with Shakespeare’s works, it is easy to see how what Molière writes about in 1664 can be applied to the present day. A wealthy and pious father, Orgon, and his mother are enthralled by Tartuffe, a former vagrant who claims to be able to speak directly with God. The rest of their family remain unconvinced, although when the play opens Orgon and his mother are consulting with the purported prophet before making any decisions. The extent of their reliance on Tartuffe becomes apparent only when Orgon breaks off his daughter’s engagement and promises her hand to Tartuffe himself, at which point the rest of the family decide to intervene. Orgon’s wife, Elmire, is outraged by the prospect of her daughter marrying a beggar, and coaxes Tartuffe into confessing his attraction to her. Then, Elmire urges her husband to watch as his trusted advisor tries to seduce her, thereby exposing him as a lascivious fraud. The play worked well on the stage, and it remains amusing today.

In addition to the confusing medley of languages, Molière’s play was relocated to the US. In a play which satirises religious hypocrisy to the highest degree, the reason for the change of scenery is obvious. Orgon believes himself to be a profoundly dedicated Christian. Hence, when Tartuffe asserts that he can communicate God’s will, Orgon blindly believes that he is leading the most virtuous life he can, even when it comes at the expense of his daughter’s happiness. Tartuffe is, at its heart, a classic French comedy, but it is also deeply satirical. It exposes the hypocrisy of zealous religious dedication: the title of the play often becomes The Hypocrite in English. Less obvious was the benefit of the additional scene Garutti tacked on to the end of the performance. In this section, Garutti made explicit reference to Donald Trump and the current political climate in North America. This was an unwise move that only served to subtract from the subtlety and universality of the text. Nonetheless, Garutti is not the first to make the comparison between the 45th president of America and Molière’s famous prevaricator. Another popular English translation of the play renders Tartuffe The Imposter.

Bilingual theatre is a controversial and challenging new platform for plays written in foreign languages. I have no doubt that more will follow, despite the lukewarm reactions to the production. By muddling the two languages and the two time periods, Garutti left audiences disorientated and confused, but the end product was arguably ‘closer’  to what Molière wanted to convey. There is no straightforward solution to comedy’s great dilemma: Tartuffe despite attempts to make it more accessible to the modern English audience, remains of its time.