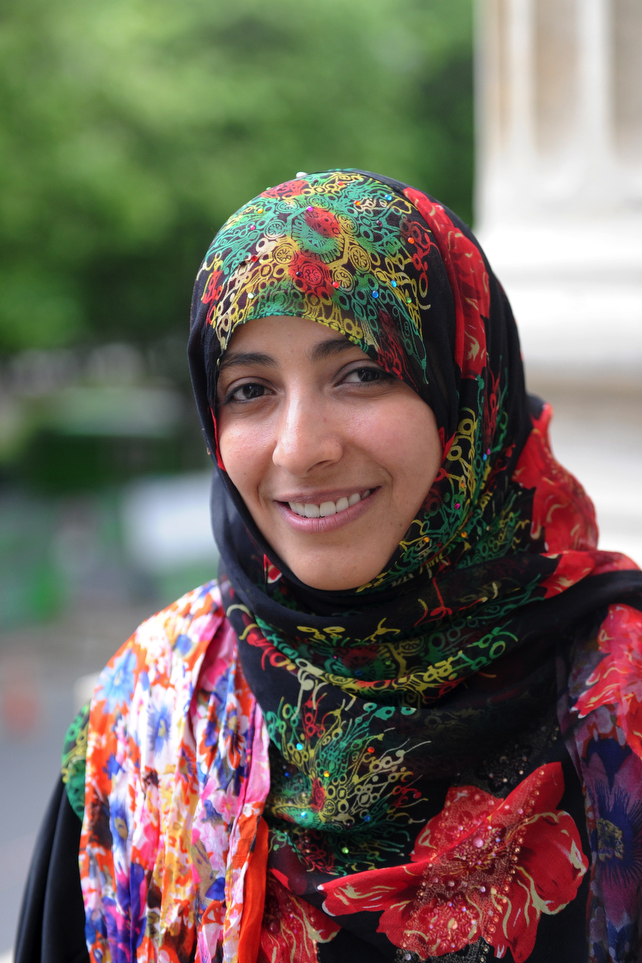 In Trinity term last year, I hurried to St. Catz after the Oxford Guild’s email went out. As you may have guessed from the byline, the lady I was there to meet was Tawakkol Karman. She was born on February 7th 1979 in Shar’ab al-Salam, Yemen, later graduating from Sana’a University with a political science degree. She then became a journalist, something that led to her founding the group Women Journalists Without Chains (WJWC) in 2005, an advocacy group for press freedom with which she organised weekly protests from 2007. She was also highly critical of Yemen’s government under President Saleh, especially after moves to give him the role for life. She organised protests against him, something that has led to imprisonment and death threats, including one, according to the New Yorker, from Saleh himself. The Yemeni Revolution in 2011 eventually led to his resignation from office, and saw her receive the Nobel Peace Prize for her campaigning.

As one of the 15% of individual women to have won the Nobel Peace Prize, Mrs Karman is in an incredibly exclusive club, more exclusive still if you consider she is the first Arab woman to win the award. She was joined in the main event after this interview by Malala, who together represent an eighth of female Peace Prize winners. About this disparity, she was at pains to point out that the Nobel Prizes must be first and foremost a meritocracy, and that accordingly, the Nobel Peace Prize should go to whoever deserves it, no matter the gender of the recipient. However, she noted that it is disappointingly reflective of a global state of affairs. “Efforts by women in development, [the] fight for peace and democratic transition around the world are underestimated”, as well as in political parties and parliaments. Her belief for the reasons behind this? An answer that cuts straight to the point, stating that “the influence of customs, traditions or of misunderstood religious texts should not make us think [that we are] wrong.”

In recent years, the reputation of the Nobel Prize has been brought into disrepute, with a harassment scandal affecting the Nobel Prize for literature, while laureate Aung Sang Suu Kyi continues to face calls for her award to be revoked in response to her apparent silence regarding the persecution of the Rohingya in Myanmar. What is the value of the prize then? Despite the aforementioned scandals, it is the reputation of the prize that is still its most important factor. She said that the prize provides encouragement for those striving for peace in fields around the world, and while no one sets out to win the Nobel Peace Prize, it is just an added bonus of striving for a better world, and stopping injustice.

Mrs Karman’s award, as stated by the Nobel committee, was “for [her] non-violent struggle for the safety of women and for women’s rights to full participation in peace-building work”. Her campaigning in Yemen initially brought her to international attention, and while she no longer lives there, it is a country that she is still devoted to. Yemen has been in the grip of a devastating civil war since 2015, between the Houthi rebels and the Saudi-led coalition including the Yemeni government. Despite the devastation and atrocities committed by both sides, she remains optimistic for her country. While no love is lost for either of the regional powers in the conflict, she believes that her compatriots must also bear some of the blame, for allowing these “authoritarian and greedy regimes to intervene in [Yemen’s] affairs”. As for the future, I speculated whether we may see a return to North and South Yemen, as the country existed for many years during and after the end of colonialism, before uniting in 1990. If the country does fragment, as some actors, such as the Southern Transitional Council, would like, she doesn’t see an outcome where a recognisable Yemen would emerge. Indeed, she believes that division into North and South would not stop there, and would be the catalyst for further fragmentation of the country into increasingly small states, ripe for exploitation. “For this reason, Yemenis [must] reject such [a] divisive project with all their might.”

Coming at the tail end of the Arab Spring, which has seen revolutions sweep away the old guard, as in Tunisia, but also led to protracted civil wars in Syria and Libya, some have argued that it was a failure. Despite the latter outcomes, Mrs. Karman sees the Arab Spring as the inevitable result of “failed and corrupt regimes” for which there was “not even a single reason… for remaining under.” As for the consequences? She blames “[t]he alliance of counterrevolutions,” supported tacitly or implicitly, by some “leading countries in the West and the region [who] feel annoyed” at the changes taking place. She is equally indignant about the backlash of those who try “to convince us that the Arab Spring was a mistake and [a] plot. …We are firmly convinced of what we decided to do. We have been governed by criminal regimes, and therefore our struggle for freedom and dignity and for principles of good governance should continue.”

Another impact of the war in the region has been the rise of Islamist organisations such as IS. This has seen a Western alliance, supported by allies in the region, such as the Kurds and Iraqi government, operate directly against the group and their supporters. However, she does not see this unified approach working across the world. One reason for this is the problem of defining the “crazy phenomenon” of terrorism. Different countries may designate the same organisation completely differently, like Hamas, which is a proscribed terrorist organisation according to the EU, US and Israel, for instance, while recognized as a resistance movement by Turkey and a political organisation by China. If we can’t agree on who we’re meant to be fighting then how can we eliminate the problem as a whole? This problem is compounded by lack of global justice, and she is adamant that we “have to take many steps to make counterterrorism an issue supported by everyone… [aiming for] a global solidarity against terrorism [that] will contribute to reducing it greatly”. Of course, justice is not the only weapon in our arsenal against terrorism, and far from the most important. It would be a “big mistake to deal with terrorism as a matter of security only,” she notes, “as this would not lead to anything decisive.” Instead, as countries around the world are beginning to realise, we must deal with it holistically, and “look for the reasons that have led them to follow the path of terrorism”, with tyranny, racism and corruption being primary in her mind. “In [her] view, the world will not be free from terrorism even if there is a universal solution for it”, but these steps will certainly contribute to national security and individual freedoms the world over.

In order to achieve the change in public policy required for global co-operation, the media will certainly have to play its role. But with journalists such as Marie Colvin, who was specifically targeted and killed by the Syrian government, is freedom of the press something we can afford? She didn’t hesitate in confirming that it is. While the “authoritarian regimes, influential oligarchs,…lack of credibility and involvement in irrelevant conflicts,” which are exploited to crack down on the press, seek to obstruct the dissemination of information, “the freedom of the press allows the society to know what really is going on. We must defend the freedom of the press with all our strength, and we should not allow any restrictions on it, whatever the cause may be.” The other threat to press freedom comes from the buzz word of the moment, ‘fake news’, and the encroachment of opinion into the factual, increasingly enabled by a social media that doesn’t care for journalistic integrity or checking sources. Despite this, we cannot give up on journalism just yet. Comparing the idea that social media will render more traditional news sources redundant to the claims that television would kill radio, she is unfazed by these developments. In fact, both methods complement each other. While “the press…analyses and covers events from different angles and aspects” social media is able to “play an important role in [preventing the monopolisation of] information” and bypassing censorship, whether moral or legal.

My final question focused upon the ongoing #MeToo scandal sweeping broadcast media. Given the close relationship between the two, is a similar reckoning awaiting journalism? While not quite on the same scale as that in film and television, incidents such as the harassment of a female reporter by a Japanese vice-minister have led to some change in the industry. While it seemed that she didn’t entirely understand the question, she noted that in general, “the world of journalism is no different from television and film industries. From time to time, abuses and transgressions take place in both areas. However, such violations will not destroy either journalism or television and film industries”. While the individuals in question will live in infamy, the show must go on. And it absolutely must, for “the issues addressed by the television and cinema are the same ones focussed on by journalism and even by social media.” In order to see change, to bring to light the secrets that have been hidden away, “people are the ones who should identify what issue should be addressed, and draw the[ir] attention”.

At a time when journalism is under threat from world leaders both democratic and autocratic, it is heartening to know that there are still people who are prepared to go forth in the pursuit of the facts, no matter the difficulty. Censorship, whether by governments or individuals, cannot stand if we make a point of opposing it, and support those who bring it to light in the first place.