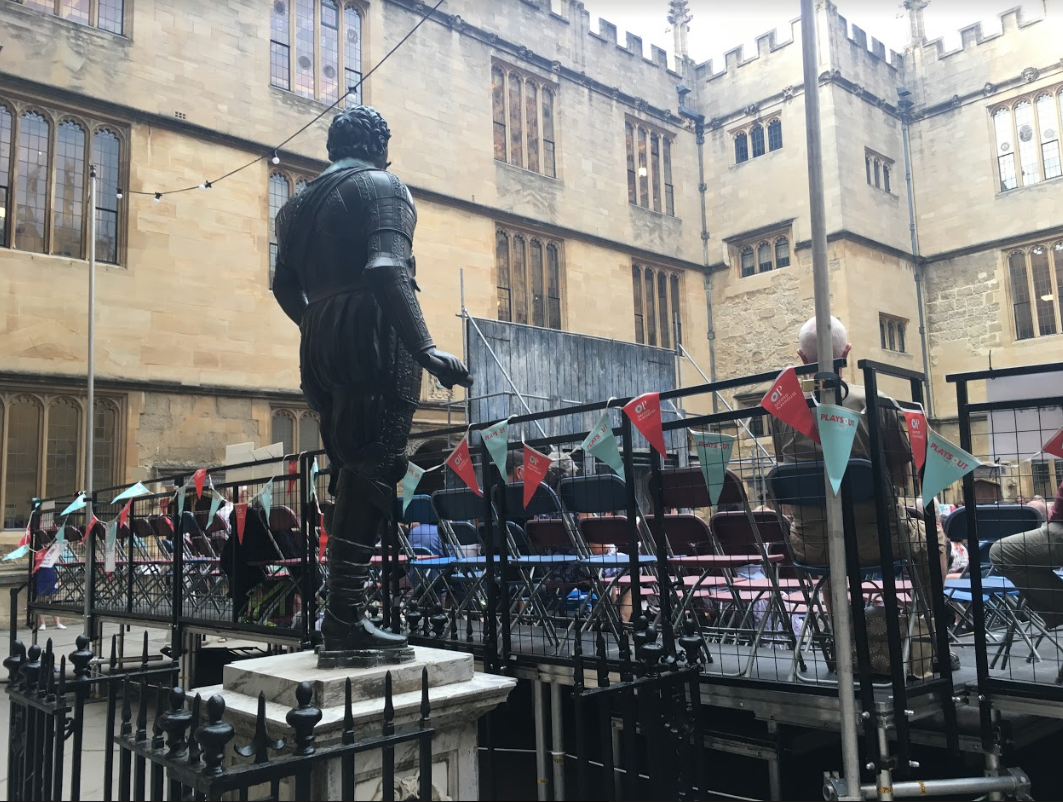 A night of Shakespeare at the Bodleian

Image Credit: Elle Styler. Description: a statue looks over the audience in the Old Schools quad.

Oxford summers can be a real pain for those who don’t vacate the city to return to family homes—the lack of personal space on the High Street, an impossible task of finding a café seat, and all the while sweating in these breathtaking yet unairconditioned buildings. But it’s also a wonderful time to immerse yourself in the many shows brought out for visitors.

This past July, Shakespeare’s Globe on Tour took over the Bodleian Library’s Old Schools quad for two weeks. When ordering tickets, you might have seen no specific play on offer. Following the Elizabethan tradition of leaving the choice of play to most powerful person in the audience, for the first time, the Globe actors gave you three choices: Twelfth Night, The Taming of The Shrew, or Merchant of Venice.

With the show set to begin at 7:45pm, I arrived early to relax in the Divinity Schools for a pre-show refreshment. It was an experience in itself to enjoy a gin and tonic within the walls of the Bod, all without a university authorized KeepCup.

The seating available allowed for a great view in nearly every spot, and during the six-week heatwave it was the perfect night for an outdoor show. Music began to play and the cast members slowly appeared on stage, playing a cheery melody to get us in the spirit. The energy of the actors was immediately infectious from their warm hello. Our choices were called out to us, and with each option the audience roared and cheered for their favourite, until it was decided that The Taming of Shrew was the sure winner.

I had read the classics, Romeo and Juliet, Othello, A Midsummer Night’s Dream, but The Taming of the Shrew I knew nothing about—not even the basic premise.  As the story progressed I understood why this play was perfect for the setting. Set against the backdrop of our historic library I watched Lucentio and Hortensio compete for the affection of Bianca while pretending to be tutors. I could think of no better place to experience this story for the first time. The stage and the surroundings seemed to blend into one, leaving me fully engaged with the play.

Our unusually dry British summer came to an end during the first act, but the actors carried on without flinching, adapting their lines to make light of the pouring rain—a testament to the quality of performers you’ll find with Shakespeare’s Globe. The distraction came with the rush of the audience opening umbrellas at their seats or rushing to stand under the door’s archways. Nevertheless, the show must go on.

The rain came in start/stop waves which might have been troublesome for members of the audience, but I personally felt it created an extra-sensory show experience. With darkness falling midway through the two-hour show, the fairy lights strung around the quad left us in a pleasant glow.

The acting was first class and the simplistic stage dressings and costumes were suitable for a show performed on a whim. Consider the amount of rehearsal that must have been needed to memorise three shows without knowing which one would be performed—an impressive feat. Armed with a professional and diverse cast it was clear that the eight actors we saw on stage were chosen as the best people to perform the repertoire of three shows and the challenges each would bring.

Given the choice between a comfortable theatre experience or the alluring transformation of a beloved Oxford institution into sixteenth century Padua, Shakespeare’s Globe on Tour at the Bodleian is one I would choose year and year again.