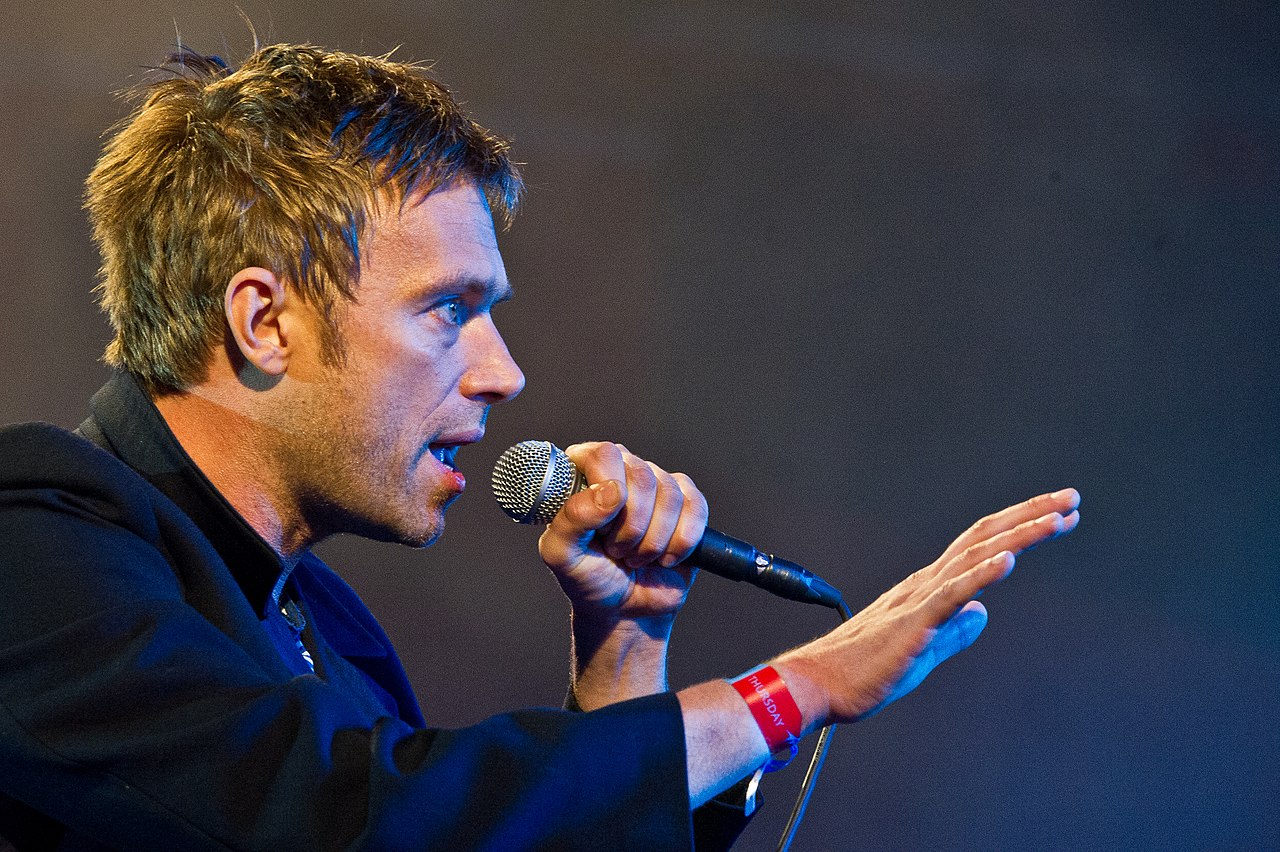 Japanese culture considers it rude for someone to greet the day’s weather with impractical choices of clothing. Who knows if Damon Albarn is comfortable offensively sweating it out in a long-sleeve omelette yellow sweater and jeans on a sluggish, sultry evening in the Tuscan city of Lucca, calling out to a stone statue of the great Napoleon’s sister Elisa that stands in the crowded Piazza Napoleone before him? But even pop stars need uniforms to work in. And besides, it’s probably good for marketing Stone Island’s Menswear.

Although we must still acknowledge Gorillaz’ primary existence as a fictional animatic comic-art group first visualised by artist Jamie Hewlitt in the early noughties, Albarn’s ever-casual blend-in-with-the-crowd clobber could never defer the mountain-massesf attention he absorbs as an actual human being: his is the rough-smooth singing voice that blesses the part dingy-disco, part shimmering travelogue that is Gorillaz latest release, “The Now Now”; his is the name that Italians shout in their Tuscan fandom; he is the lynch-pin of the Gorillaz Universe.

I’ve travelled here to see Gorillaz play their first show in Italy on the back of this release. Large chunks of The Now Now, like 2010’s The Fall, it isn’t hard to figure, were written on the road. Albarn plumbs his soul on buses, highways and hotels with bejewelled midnight street views. Titles like “Lake Zurich”, “Idaho”, “Kansas” reek of diary entry – “I hope I make it home by Wednesday”, Albarn sings on “Magic City”, with all the melancholic wistfulness of the aeroplane window-starer looking down at the sun-smothered flats of Europe, or at distant mountains that seem crumpled together from a real-time strategy game map. The Now Now was good listening on the plane here. I return home on Wednesday.
“Yesterday was miserable. The World Cup”, says the singer. Ahh, both Damon and I know too well the grim joys of being an Englishman abroad during our semi-final defeat to Croatia. This time last night was a rush to Lucca to watch the match after my Ryanair flight was delayed for 90 minutes (which is, inconveniently, how long football matches last.)

It was minutes after landing in Pisa, after frantic EU data roaming, that we rapturously heard of Trippier’s 6th minute free-kick while walking on the bicycle lane. A slice of the cagey first half was observed in an open bar in Pisa as a pusher tried to sell us drugs. We watched the game on a fellow brit’s iPhone on the slow train to Lucca. Locals joined in the viewing as the heart-sinking equaliser was netted. But thank God Croatia, and Mario Mandzukic, waited until extra-time to crush out tender English hopes, providing enough precious minutes for us to haul ourselves and my burdensome red suitcase across town to meet our friends and down glasses of bitter rip-off World-Cup knock-out beer. Fuck. England out!

Meanwhile, Roger Walters is churning through his Pink Floyd greatest hits set, casting his dreamy prog-rock that winds through the mazy high-storeyed streets of Lucca. Bits of Dark Side of the Moon drift in and out as we look to poach the best outside spot to snatch glimpses of the dramatic light-shooting explosions of Us and Them, or let our well-travelled and weary ears ride on the whippy solos of Money. The Lucca Summer Festival takes the city over. See it and hear it from cool mountains yonder or from bustling inner-city bars.

But back to the present, or, should that be , the NOW NOW, it’s Gorillaz night, and, unlike last night, by virtue of a ritualistic transaction of Euros, I’ve been allowed in, to watch the concert, from the inside.
Live Gorillaz are a far-cry from their chintzy studio-crafted reflections. This live Gorillaz exposes the all-out assaulting rock band potential beneath the sculpted electronica. The salvo, “M1 A1”, that most un-Gorillaz punk-thrash from their debut album, sends audiences immediately flailing and confused. The song is a cold water to face. HELLOOOOO!!!! IS ANYBODY THERE!!!

Like the addict, the phone in my pocket gives me that impulse to snap the vibrant comic-green of “Rhinestone Eyes”. Take a picture. But I resist.

Slam! After the football chit-chat comes the electro-pop whirlings of “Tranz”, or trance. The blue-haired singer known as 2D has hypnosis-eyes on the back-projection (it runs images behind the band constantly throughout the show) locking on to the dancers of the Piazza Napoleone.

“Hmm, maybe you should record this event, Connor”. Ergghh, I must take a picture, mustn’t I? Do it now, do it NOW NOW. Like the addict, the phone in my pocket gives me that impulse to snap the vibrant comic-green of “Rhinestone Eyes”. Take a picture. But I resist, because I must dance, I must be attentive, I must groove to the pounding beats of “Strobelite” and “Stylo”.

The urge to get out my phone will not go away. Urghhh. That’s it. It’s happened. I’m a tech-dependent sucker like the rest of the planet’s sad consumers. The profit-makers of the Digital Age have my frail mind on their leashes. Constant flashing lights, screens, the effluence of culture and the wearisome nature of all these constant strains on my attention, This is nothing if not the epitome of the Gorillaz message. Just check out their pithy inter-song back projections – “Big Brother is watching YouTube”; “Stream if you want to go faster”.

So, as the corpulent duo of De La Soul emerge to spit rhymes on “Superfast Jellyfish”, the screen swarms with neon signs for fast foot burgers, pizzas, chicken, kebabs, jellyfish, super fast. And the signs dip in-and-out of view, flashing, sliding, re-engaging. WE’VE GOTTA CONSUME ALL WE CAN WHILE WE’RE HERE, PEOPLE!

As if it’s not enough that artists like Albarn himself are reflecting our sickening over-exposure to consumerist culture, there’s also the phone screens glaring in front of the stage grabbing videos of the show to distract me. And there’s this irrational pull inside of me to join in the whole freak-show myself. Shit, “El Manana” is coming on, I’ll take a picture.

Guest vocalists Peven Everitt and Danny Brown star-shoot on the stage with all the vigour of a football substitute, say, Marcus Rashford.

But OHHH MY, what a haunting song it is too. Amid the pop-hook-saturated restiveness of the Gorillaz’ set – “ Feel Good Inc.”, Dirty Harry” et al. – there’s a poignant moment. “In time, will you want to be mine?” Goose bumps pimple on my calves and neck as I enter into a brief transportive stillness. I love Gorillaz! In this grey, polluted, manipulated world, give me these fresh brightly coloured bursts of imagination to tune me out. Look, Damon is actually smiling as “Souk Eye” reaches its jaunty climax. “Humility”, is just so…summery”. I just want to be in Gorillaz! It looks like fun! GIVE ME A RING, DAMON, I’M FREE. I’M HAPPY TO GET OUT MY GRADE SIX PIANO FINGERS TO COLLABORATE ON YOUR NEXT INNOVATIVE AND CHALLENGING PROJECT!

In this highly appreciative mindset, songs come and go – “Andromeda”, “On Melancholy Hill”, “Kids With Guns”. Guest vocalists Peven Everitt and Danny Brown star-shoot on the stage with all the vigour of a football substitute, say, Marcus Rashford. The audience, myself included is re-energised by their dynamic vocals. (but alas, it’s the flaw of the ever-ambitious Gorillaz, that some collaborators, – Popcaan on “Saturn Barz” and Snoop Dogg on the grimy new single “Hollywood” can only appear as recordings on a screen. Talk about reduced vibes!)

So, the encore happens, and the concert ends abruptly on a jarring “Clint Eastwood”. Albarn flaps his melodica about, and the roadcrew swiftly pack up the stage before you could say “My future is coming on”.

Then the emerging audience floods back into the bustling city centre with its ice cream parlours, clothing outlets and restaurants all still open for trading. There’s a strange limbo now. Did Gorillaz even happen? In England, after the concert, everybody’s rushing home to hit the last trains because life doesn’t carry on long past eleven clock. It’s oddly normal now. I kick back. I get an ice-cream. I salivate over the bitter melted chocolate on the inside of the cone. We’re lost in mazy Lucca trying to find our way back to the car. Will I make it home? I would be grateful if we did.