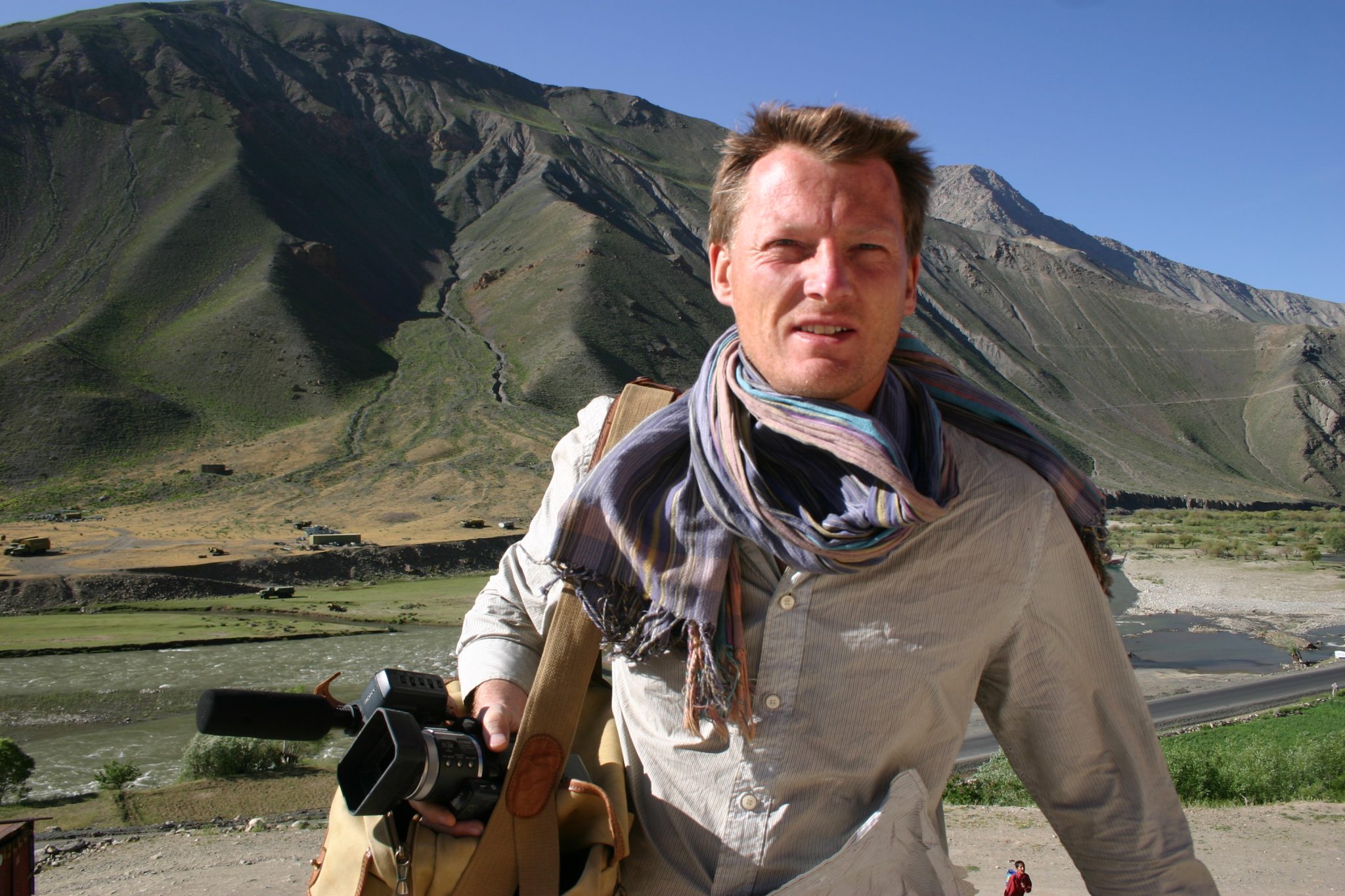 I find Benedict Allen at the Sheldonian Theatre, there to give a talk on the various expeditions he has undertaken, and, more particularly, on the events of November 2017. Benedict was reported missing in Papua New Guinea, before being ‘found’ and taken out of the region by helicopter. This event brought him to the attention of both national and international press and brought criticism of his ‘immersion technique’ – where he enters areas without a satellite phone or GPS. Apart from this, Benedict has also written ten books and filmed six series with The BBC, pioneering the ‘head held camera’ which allowed him to undertake some of his filmed expeditions without a camera crew. Before the talk, Benedict and I find a spot on the stairs and sit down to chat.

How do you be an explorer in the modern world?

People think and I’ve also been portrayed, as “left over from another era”. And it is true that I was part of the last generation of people who could just walk and walk and walk and not come across their own culture. In the 1980s and 1990s, that was the last sort of time of the classic explorer; but even when I was a little boy everyone said the world has been explored and you can’t be an explorer. The difference perhaps was that my dad was a test pilot, and he used to fly overhead with his planes and it made me think [that I could] be an explorer – I can be some sort of pioneer. It made me believe that it’s possible to be a bit different. So that was how I became an explorer.

How did people initially perceive your ambitions?

Even then it seemed a bit eccentric and a bit weird – “How can you have a career as an explorer?”. So essentially, I’m an author, I write books and then when technology advanced and people developed camcorders, The BBC said “Can you take this on one of your expeditions…”. So, I became the first TV explorer. But certainly, I was able to carry on my expeditions and film myself…I’m not a presenter.

Why do you use the ‘immersion technique’?

Well, it started out because I didn’t have any money and I couldn’t think of any other way, apart from to go and live with the local people. I thought that was the only way to do it because they haven’t got any money either. So, it was financial to start with. And then I began to realise there was a whole perspective that never gets communicated, because exploration has a history of imperialism. It’s been non-stop – whether it’s missionaries like David Livingstone or Columbus who claimed 10% of everything.  You name it people planted flags and expanded their point of view…and I simply felt it was important to go in there and listen and learn. By extension it meant immersing myself in other worlds and that meant not taking all this outside stuff. I wanted to look the others in the eyes and say I’m doing it on your terms. This is not me […] who can be rescued in minutes and say “Thanks a lot – I’m off”. I just wanted to go in there an ordinary human being and to some extent I was trying to make the most of being vulnerable. It was ironic, but you’re looked after much better of course if you’re not a threat.

How do you interact with people in situations where there may be a language barrier?

Well, it’s my major issue really. It’s not necessarily a problem [but] it can get really bad – terrible misunderstandings. So, I invest a huge amount of time learning a national language or learning the local language. Often people don’t really want to speak the national language or they don’t even know it. But I’ve got to get physically to them. So that usually means learning Indonesian or Mongolian or Spanish or Portuguese… I’ve spent a lot of time learning languages. But it helps hugely if you’re by yourself and you need to learn quickly and you need to learn practical skills.

The funny thing is I didn’t know about any of this: I was the person out there. I didn’t know any coverage at all, and that was the weirdest thing…I mean as far as I was concerned, I was stuck. There was fighting between two different communities and I just thought I was never going to be able to get out. I thought the only way I could do it was to try and get out myself and risk being killed…and I had malaria and I had dengue fever […] The shock was when a helicopter came out of nowhere and spared me this journey of having to walk out – and that was The Daily Mail.

Tell me more about the press coverage you received.

It wasn’t just The Daily Mail that was interested. It was The South China Times, the New York Times – it was not just national it was international. So, it was a huge story… maybe it was just an accident of time because people have never been interested in my expeditions generally; I mean not to this extent. People haven’t a clue so they assumed I was sort of a madman or incompetent or something. But no-one really knew. So, there was a lot of people writing their own angles. Some people saying I was an imperialist, some people saying I was a throwback to another era…So part of the reason I’m doing the talk now is to give the full story.

How do you reconcile the apparent danger in your work, with continuing to explore and having a family?

The family is very recent […] well, comparatively recent. All my big expeditions, I wasn’t married and I didn’t have children. But then I retired essentially…I lost my dog team in the Arctic and I thought this is it. I thought […] this is ridiculous, I’ve risked my life so many times […] I won’t risk it anymore. So, I settled down and had the sort of life that perhaps I could have had years before and it was lovely: a family life. And then I found myself going back to New Guinea with Frank Gardener, The BBC Security Correspondent, and it was just a TV programme. It wasn’t dangerous but it awakened my mind to what I used to know and I’ve got all those skill sets. Not in a grand way but I invested a huge amount of time into living in remote places. And I thought, “I can’t just not go off.”

How do you continue to explore after ‘retirement’?

What I try and do is only go for a month or two months. Because generally at the moment I’m going back to places that I used to know. It’s much safer because I know the way, I know the terrain, I know the hazards. The trouble is you can’t rely on luck always being on your side. So, things will go wrong. Things you can’t possibly predict. Like a war – that’s not my skill set, that’s not what I deal with. So, it’s just an unlucky thing. And unfortunately, those unlucky things come along. But I still insist it’s the right thing not to take a GPS, not to take a phone because I want to do it on the local people’s terms and not impose.

Do you think your work is important?

I think it’s incredibly important to actually disconnect… I think, weirdly, it’s more important than ever that I don’t connect, that I don’t take a satellite phone and talk to my relatives and talk to the world. Because we are so connected. Journalists talk about journalism: the same story going round and round and round. It’s sort of like that with the rest of our lives. We are constantly tweeting, Googling, connecting with each other. So few people are stepping aside. And I think that’s now part of my job to take a different perspective and to try and encourage other people to do the same.