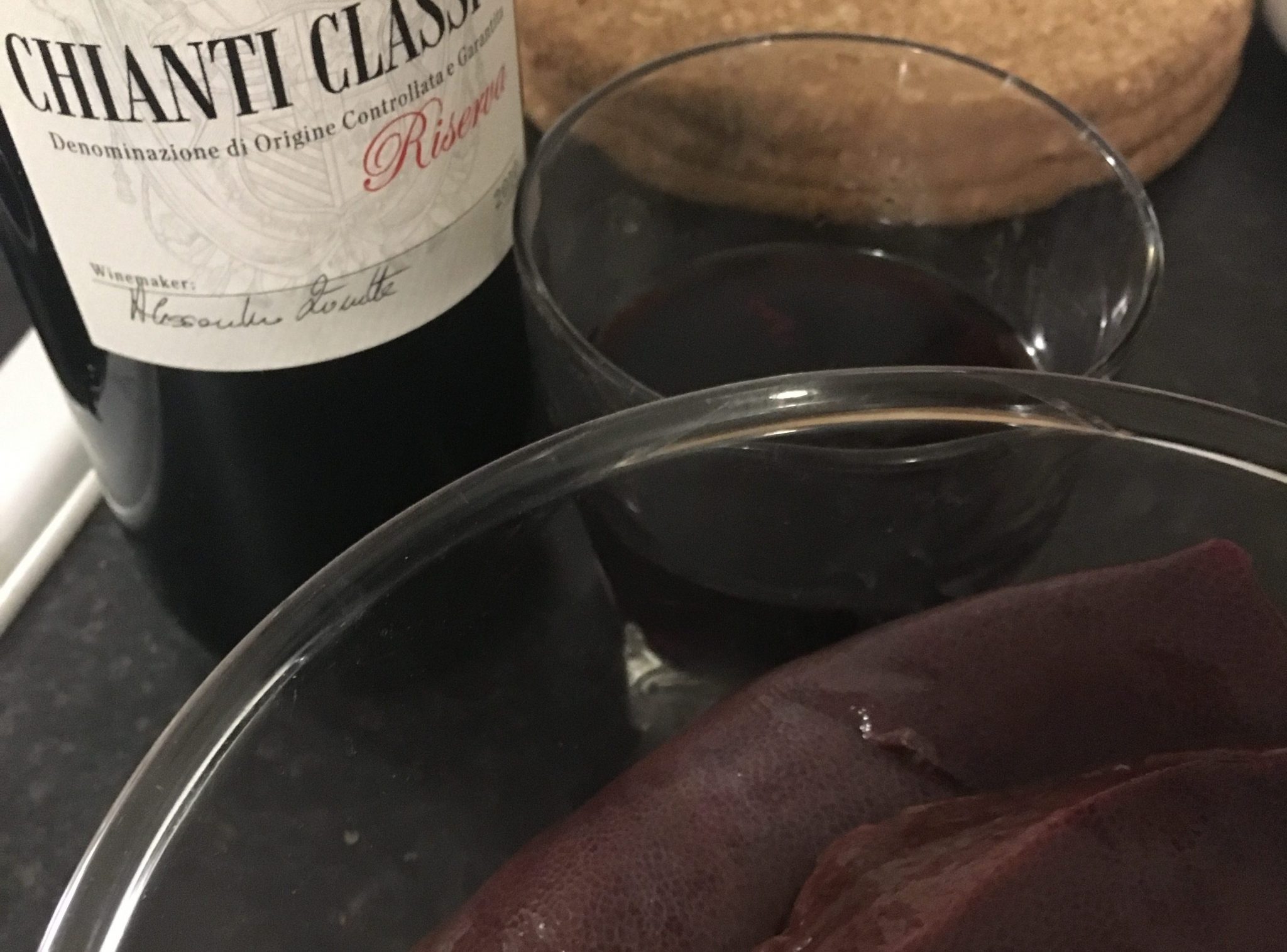 Liver little and give filtration organs a chance: a tribute to Keith Floyd

Image credits: Louis Thomas. Description: a pig’s liver in a bowl with a bottle of wine.

Ancient Roman Emperors, before they were dulled by the influence of Christianity, used to have a haruspex to inspect the entrails of a sacrificed animal in order to predict the future. Checking for blemishes and the like. It would seem that I should have taken a hint from the monumental liver that I purchased from the butcher that I would have a monumental task ahead of me. It was an absolute whopper: an entire pig’s liver which cost me £7 and could have easily nourished a mid-sized family. But I am a glutton, and I don’t know anyone else who enjoys offal. I’ve cooked with lamb livers many times before, but the recipe I was going to attempt required that of a swine. I first came across this recipe whilst watching the late Keith Floyd, a television chef known for getting drunk and cooking across the world, so my attempt at his recipe of quenelle de foie – Gallic liver dumplings – was very much a tribute to him, and, in order to make it a proper celebration of Floyd, I was appropriately sloshed.

The recipe originates from Alsace, the most Germanic bit of France, so, being a maverick, I decided to combine it with another Alsatian dish: tarte flambée, effectively a pizza with a cream cheese sauce, bacon and onions – an absolutely delicious invention which I may well have ruined with offal, or revolutionised depending upon how much you like liver. Because I was cooking with liver, I decided that the most appropriate tipple would be a cheap Chianti, though I could not find a way of incorporating fava beans into the recipe. However, it is often said that human tastes like pork, so presumably pig liver tastes like human liver; Dr. Lecter may yet still approve of the dish. The Chianti had notes of ripe cherries, cinnamon, and self-loathing, though as this is an Alsatian monstrosity, some Kronenbourg might be a better choice of beverage. Then again, I can state with complete confidence that no one is going to attempt this anyway.

It was an absolute whopper: an entire pig’s liver which cost me £7 and could have easily nourished a mid-sized family.

The first step I boldly undertook was to make my dough by combining half a kilo of strong white flour with a pinch of salt, and then with 320 ml of tepid water into which I had stirred the contents of a sachet of yeast. Mix together and knead. This was enough to make two large pizzas, in case I managed to make a friend. Now it was time to whip out my organ, and I realised that I would only need around a third of the pig’s liver, so I froze the rest to assert my dominance of the freezer-space in the flat. I chopped the liver into pieces and then used a stick blender to attempt to mince it, resulting in a menacing gloop which is perfect for making dumplings with.

Floyd did not give quantities for the other ingredients, probably because he was bladdered, so I just added what seemed about right: half a diced and sweated onion, a few rashers of fried bacon chopped into small pieces, a beaten egg (because one egg is un oeuf), a handful of breadcrumbs soaked in milk, some finely chopped parsley, a quarter of a nutmeg (grated, obviously), and then some seasoning. Mix to combine, have a drink, and then a few more, and start listening to The Stranglers for a true Floyd experience.

Now I had to cook my liver paste in order to create dumplings (I bet you’re salivating at the very thought of a “liver paste”). I took a spoonful of the mixture and gently lowered it into simmering water, repeating the process until the pan was almost full, and left for fifteen minutes to cook through. When I returned I discovered that my dumplings had indeed cooked through, though the water was stained yellow, a reminder that I was dealing with an organ used for filtering toxins. Ignoring the steaming cauldron of piss which was filling the kitchen with l’odeur du foie, I tasted one of my plump little dumplings.

It might have been the half a bottle of red wine I’d had (I’m something of a BNOC), but they tasted wonderful. I’ve had pan-fried liver many times before, but this was a new experience. The mineral tang and bite of the liver was still there, but it had an added smokiness from the bacon, sweetness from the onion and was blessed with lightness by the almighty breadcrumbs. I did a few more batches, had another drink, and it was around this point that one of my flatmates arrived, and immediately fled to his room – probably disgusted by the very idea of liver dumplings, and certainly ruing the day he ever met me.

But hubris got the better of me as I tried to out-quaff Bacchus in a bid to emulate Floyd. Whilst making the lactose-heavy sauce for the tarte, I was grating some nutmeg into some quark (a fairly bland cream cheese) and managed to zest my own thumb. Not deterred, I switched hands when I grated the comté, a sweet, nutty cheese from near Alsace. I managed to zest that thumb too. My own precious blood was quite literally going into this dish (though sweat and tears were largely absent).

Floyd made cooking under the influence look so effortless, but it was only going to get worse. As I removed the pan I had preheating in the oven at 250°C, I could see the end in sight, but, whilst placing the dough base into the hot pan I grabbed the pan handle and scorched my once beautiful hand. I was in agony, fumbling around the kitchen like an intoxicated Monsieur Hulot. How much I can blame my injuries upon drunkenness rather than sheer idiocy is up for debate.

I may have a been a drunken, horrifically injured mess, but I was also a pioneer, pushing the boundaries of offal.

I fought through the pain, both physical and emotional, and added my toppings: the cheesy sauce with my blood in it, chopped bacon and finely sliced onion, before bejewelling my savoury tart with the pièce de résistance – the little brown globules of liver. As far as I’m aware, no one in history has ever put liver dumplings on a tartee flambée before. I may have a been a drunken, horrifically injured mess, but I was also a pioneer, pushing the boundaries of offal.

I placed my creation into the oven and waited. Within ten minutes, it was ready, and I removed my creation from the furnace (using oven gloves: we pioneers usually learn from our mistakes). Ignoring the fact that the dumplings had crisped up so as to resemble dehydrated droppings, it was a rather beautiful sight, resembling a fauvist painting due to the use of vibrant colours, ranging from light brown to beige. Yes, the base was a tad too thick, but aren’t we all?

The moment of reckoning had arrived – it was time to taste, but the wine had scalded my taste buds with its sickliness, and my stomach was in turmoil. However, this never stopped Floyd, so I went ahead and crammed a slice into my flabby face. The liver worked well with the onion and bacon, which was not a surprise, but inebriated me absolutely loved the combination of cheese and liver, and the quark’s lack of cheesiness was not an issue, as it made what is a very rich, Germanic-ish dish relatively refreshing. I managed to eat half of it before I had to concede defeat to the wincingly strong wine which by now had stripped away my tripe, leaving my unlined-stomach exposed.

Considering that I bastardised the culture of Eastern France in order to create this dish, I was very pleased with the result, however, I do not think I can be bothered to try it again whilst sober, though I will definitely do the dumplings again, largely because I have half a tonne of pig’s liver in the freezer. If there is one lesson to take from this it is that as fun as drinking and cooking are, combining the two is a recipe for injuries (see what I did there?) – though I would have been grateful for some wine when sampling the tripe from last week’s recipe. Keith Floyd knew how to drink, cook, and present to camera, a true broadcasting pioneer. He also knew that nose to tail eating was the way forward, a philosophy centred around being able to cook every bit of the pig, apart from the squeal.