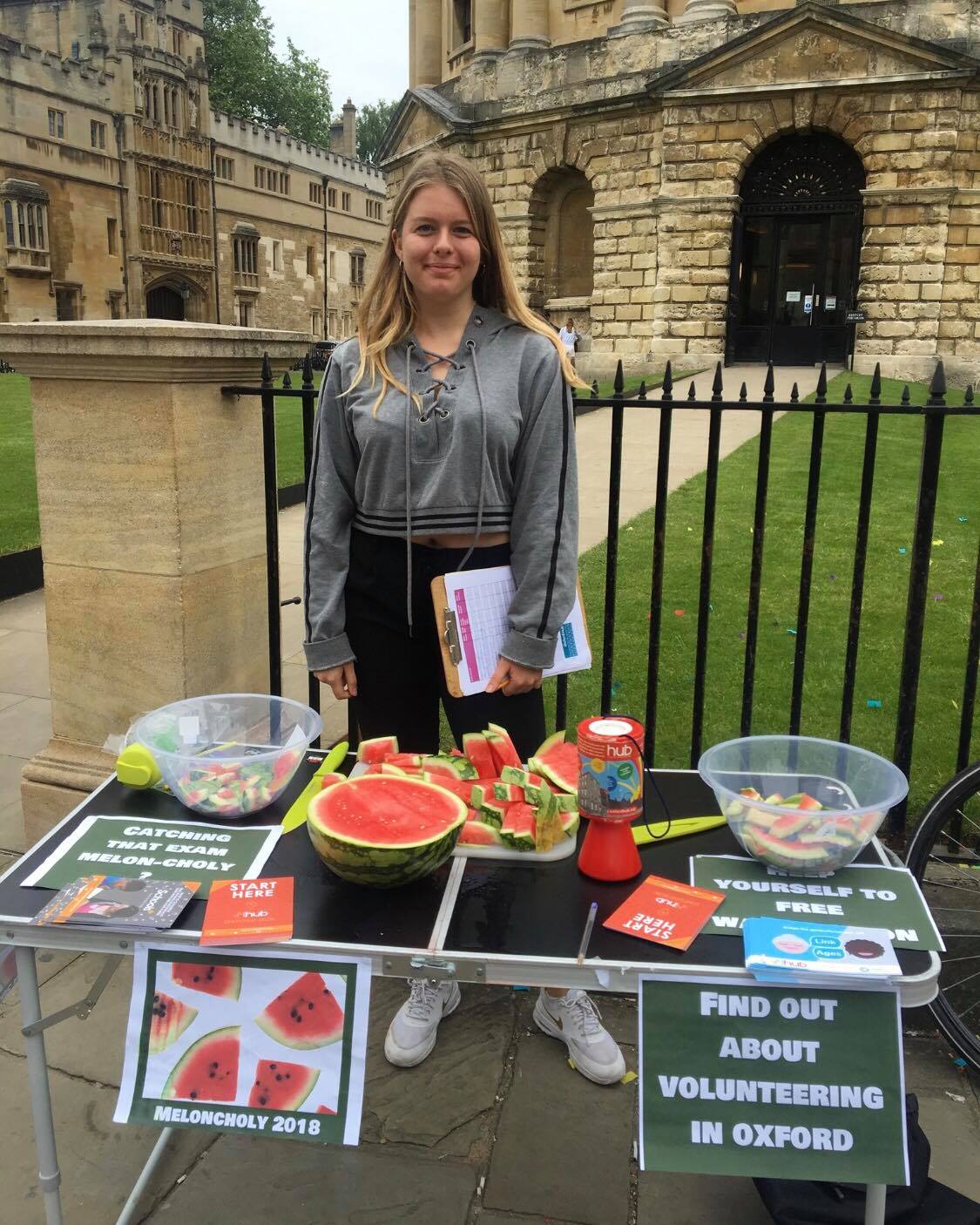 There is a Boston Consulting Group recruiting event in full swing on Turl Street Kitchen’s compact staircases. Amidst the suits and savvy conversation, it seems almost surprising that the same space functions as the headquarters for Oxford Hub, an organisation founded in 2007 to connect students to local-facing charitable groups.

Sofya Sudets, Oxford Hub’s current president, addresses this duality before I ask my first question. “I’m super, super proud to be part of it. It’s doing an amazing job for both the community and actually the students in Oxford”, she opens. “We’re really lucky to have this building: it’s owned by TSK [Turl Street Kitchen, the café below the Hub’s main office] which is a social enterprise. So [TSK] donates some of the money from each bill to Oxford Hub, so that we can use it for running our volunteering projects.”

How did you get involved with Oxford Hub?

“So, last year, I was subscribed to the newsletter, and saw that there was an opening for Practical Volunteering Officer – which is a position that actually doesn’t exist on the Exec any more. But I applied, and I got it, and I started doing things with Exec – so many of them that I didn’t stop!”

So what are your responsibilities today?

“Currently, I’m the President of OxHub. I had a handover over the summer, and changed the committee structure because I felt that the old committee structure was not working well enough. […] We have fundamentally three teams – the Events team to put on small-scale events to reach out to people we wouldn’t otherwise reach; the Outreach team, which has a coordinator and three officers, which reaches out to colleges through the college rep system and organises outreach; and we have the Ethical Network team which reaches out to other societies in Oxford. It’s not just about volunteering: we aspire to be the hub for social action, and would be keen to working with other groups in Oxford. Finally, part of the Exec job is to be overseeing [Oxford Hub’s projects] and make sure they run efficiently. Fundamentally, we are access, we are outreach, we are helping out projects, and we are trying to become a facilitator of different groups in Oxford engaging more with each other.”

In a broader sense, what does Oxford Hub do?

“The elevator pitch is that we are the centre of social action in Oxford […] because we’re an umbrella, people don’t usually know what the Hub is. [We run] about ten volunteering projects that can offer literally anything you might think about, from working with kids […] volunteering projects with the elderly, directly through the Hub, in I think three care homes around Oxford. We also run Fellow, which is a project which teaches languages to refugees in this room each week. And we have environmental projects, and homeless outreach that people don’t realise is actually also Oxford Hub.”

Do you think there’s any particular reason for the proliferation of and demand for social action organisations in Oxford?

“The reason why I keep going with Oxford Hub is because I think it fundamentally changes Oxford University students. People who are at Oxford are sort of future leaders – they’re the people who are in a position to change the world, and they will change the world, or definitely affect it. They’re future bankers, consultants and hopefully some will go into the third sector. Whatever they do, whether it’s for-profit or non-profit, the attitude of giving back to the community is something that changes a person so much. It changes their attitude. I think volunteering can teach so much kindness and open-mindedness, and this is something that’s really, really needed.”

Have you personally found that volunteering has affected your outlook?

“Definitely – so one of the most epiphanic experiences came around last year. I went to a dementia Daybreak centre: we were supposed to go with the rest of the Exec but people dropped out and I was there alone. I didn’t quite know what to do – there was a coordinator, but it was quite far out of Oxford, and I came out thinking hard about what I want to do in life and reconsider my goals, because it’s not something [the typical student] would see every day. I think the Hub does a really good job of reaching out to people, but I don’t think we should delude ourselves that it’s necessarily going to solve the problem. If we’re going to solve the problem, we need to go campaign with the City Council – nobody in the world is going to claim that we’re going to save the world through volunteering. But when I get back home after [something like] homeless outreach and I’m in my bed, or in my room, with all my trinkets and all the unnecessary things I have […] it really puts it into so much perspective and I wish every person in Oxford did it – because if they did, we could change the world.”

We go on to discuss the role of these coordinators, be they from Oxford Hub or its partner organisations. Sofya is quick to recognise some of the Hub’s coordinators, if not most, by name: “Maddy at Project Soup; at Schools Plus it’s Jay; at Linkages it’s Amy.”

To what extent have volunteers or coordinators faced pushback because of a perceived ‘town versus gown’ divide or negative stereotypes of Oxford University students?

“I don’t know – in my case I found that the community appreciates what the students do. And obviously, we are in a place where we can’t not be doing this, but we’re also in a place where we could be doing a lot more. Fundamentally, we can’t live in Oxford and not give back to the community, because we are occupying the space – and so significantly.”

A glance at the Oxford Hub’s website after our interview seems to support perceptions of this divide: the organisation has a separate resident-facing website, though this could feasibly be to address the residential community’s specific capabilities and geographical scope.

In that case, what are the most significant challenges to broadening social outreach schemes and steps that Oxford Hub is taking to tackle these?

“My goal is to reach out to those students who are keen and interested and want to get involved but are not sure how to do it. They are not sure whom to talk to, how it will work or, say, get a DBS check, or they’re a little intimidated. Because doing volunteering is intimidating – you have to go somewhere, and talk to completely new people, and it’s out of your comfort zone, which is important and why I want people to do it. But also I’m trying to sort of spread the message that it’s not intimidating.

“Volunteering is not immediately ‘sexy’. I think it’s about the values we should have as a society; I think it’s about our ideas of success; and that these ideas are based on the world we live in. Our current model of success is that you get a job in investment banking, you wear a nice suit, you’re in the City, you’re in an apartment, but we don’t see giving back to the community and being part of a family, being part of a town, kindness, integrity – we don’t see these as fundamental values and fundamental aspirations. And I really hope we could change that.”

Sofya also highlights a recent Volunteering Social in addition to future plans for an Oxford Hub stall outside the Radcliffe Camera. She mentions Oxford Hub’s deliberate move to create linkages with other student groups, citing another recent event involving a mental health panel with Student Minds, and is on her way to a discussion with Effective Altruism society members after our conversation.

Is volunteering our best solution?

“No, no, of course not. I think fundamentally some things that we’re working on – some of the problems we’re working on – should not exist. For example, we tutor kids who are not receiving an adequate education to get into the university they deserve to be in. And I think that’s a problem that should be addressed by the government. […] We’re not going to solve homelessness by volunteering in the community, but ignoring it is just heartless.

“Nobody says that you should restrict what you do to volunteering – you can campaign with the City Council, you can go start an NGO that runs after-school programmes, but I think volunteering is the first step. It isn’t just about others, it’s about learning for youself as well.