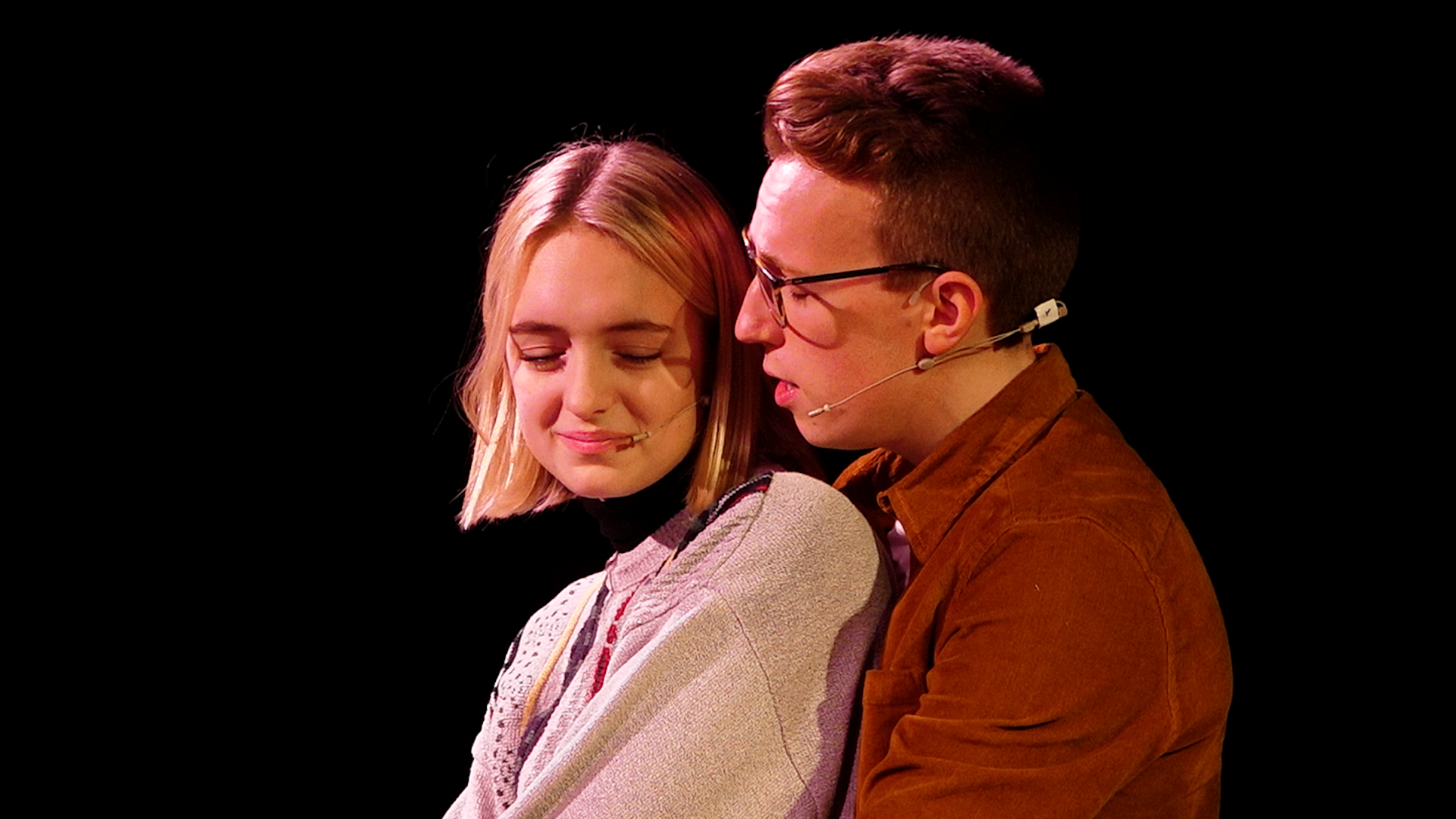 Coming out of the theatre on Tuesday night, the only word I could use to explain how I felt was ‘shell-shocked’. Nice Guy, a new musical about domestic abuse written by Sam Norman and Aaron King, manages to evoke real feelings of trauma in its audience, giving a small, yet important, glimpse into the emotions involved in these types of relationships. At the start of the play, Isla explains that she prefers writing on paper because it allows her to choose her words more carefully when describing her relationship to her father back in Dublin. An hour in, as we re-watch the same scenes she has previously written home about, now unfiltered, we see how true and how dangerous that can be.

In the fittingly intimate setting of the Burton Taylor Studio, the audience feels like they are a fly on the wall in the development of a troubling and abusive relationship between Isla (Grace Albery) and Dash (Alex Buchanan). Grace takes the role of a naïve student and turns her into a character filled with an elegant frailty, whose hurt and anxiety seem only too believable. Her first song of the play, ‘Everything’s Fine’ felt relatable for any student away from home for the first time. When it was revisited later, the subtle shifts in character development that had been occurring were made incredibly clear, with the refrain of ‘Everything’s Fine’ no longer feeling universal but rather deeply haunting and personal.

Alex Buchanan’s performance was no less impressive in the face of an incredibly daunting role, which he handled with astonishing delicacy. Dash appeared charmingly awkward, inviting the audience to find him as endearing as Isla does. Alex’s acting was flawless in his transformation throughout the play into a jealous, angry, and abusive figure, pushing the audience to feel tricked by his earlier character in the same way that Isla has been.

Ellie Thomas as Francine managed, with extraordinary levels of energy, to bring a note of humour to this otherwise dark musical. As well as this, however, she brought to light how often friends are naïve about the truth of what happens behind closed doors. Her powerful voice contrasted beautifully with Grace’s, culminating in a final duet that left much of the audience with tear-stained cheeks.

Somehow, for a crime that is so often silent, King and Norman have made a musical the most appropriate medium to portray it. For centuries, people have turned to music to express what words cannot. Here, unlike in many musicals, nothing feels sensationalised by the form, but rather every emotion comes across with absolute clarity.

On his first date with Isla, Dash sings ‘Maybe’, with the refrain ‘maybe there’s more than meets the eye’. This is at first glance a charming nod to the idea of their blooming relationship. When we revisit their date later, and watch him criticise her food choices and insist he instead order for her, the first signs of controlling behaviour, this refrain becomes that much more ominous. In these snapshots, Sam Norman and Aaron King capture many different types of abusive behaviours from comments about her weight such as ‘don’t go getting fat on me’, to more sexually focused behaviours such as Isla being forced into giving Dash a hand job whilst calling her dad.

From start to end, the production was flawless. The focus on raising awareness for charities such as Clean Slate, and helping those at risk only served to highlight how every member of the cast and crew had clearly put so much thought and time into ensuring that justice was done to these issues – and it was.