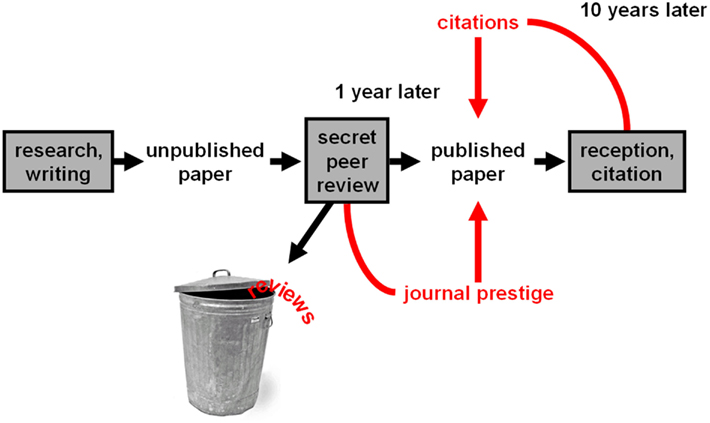 Scientific publishing is broken – but there is a solution

As a scientist, there is a certain allure to the idea of publishing in a journal. Taking the data you spent so long to collect and putting it through many different analyses and tests until you can confirm that the line you see on the graph is significant is a painstaking, exhausting process. Then comes the writing, with hours upon hours of source hunting, referencing and formatting to deal with until you can eventually come up with a paper. Of course, at that point you want to show it off. Firstly, you want to know if all that work is actually right, by getting it peer reviewed by other scientists. You’ve then got to see if any of the papers are as interested in this fascinating data as you are. And then, only then, may you get to that pinnacle of publication!

I spent some time this summer working for a biotech company, where one of my roles was to investigate what journals they should target their papers towards. While researching it, my eyes were opened to just how shady scientific publishing can be under its veneer of efficiency.

The first step on my journey to this discovery was researching the journals themselves. Some were all too happy to take your article, for a price, of course. This revealed to me the world of predatory publishing. These are publishers that will print your article, but often feature much less of, or may lack entirely, many of the processess that journals need to provide.   In particular, the aforementioned peer review, the process which checks everything from your methods to your spelling, is often limited. One memorable example by Phillip Davis, a communication student at Cornell University, involved submitting 2 papers to Bentham Scientific Publishing that consisted of gibberish. While one was rejected, the other was accepted after supposedly being peer reviewed, and an invoice for $800 was issued. He later withdrew the paper. Another notable test involved the application of the fake Dr Szust (fraud in Polish) to a number of journals for an editorial position for which she was not qualified, gaining many acceptances. It goes to show just how little some supposed science publishers actually do. There have been efforts by the community to fight back, such as Beall’s List, which gave the names of publishers deemed predatory. While the original was taken down, others have continued its mission.

The approach to open access printing, which many predatory journals claim to support, also seems problematic in general. While I admit that journals, at the end of the day, do need to turn a profit, the intentional locking of science behind closed doors is something that can only hinder research. At a time when the world needs accurate, well researched pieces more than ever, this seems counterproductive at best. I applaud recent efforts by ‘cOALition S’ to ensure that a condition of their grant funding will be that papers must be freely available to all at the point of publication. While a Springer spokesperson has stated that this move “potentially undermines the whole research publishing system”, science is a constantly moving field., and so as ideas in various fields change, so must the organisations publishing it.

Therefore, I would urge all scientists to go open access. Many organisations will pay for it, and it is a simple but effective way to both defeat predatory publishers and make research a better place, all in one go.