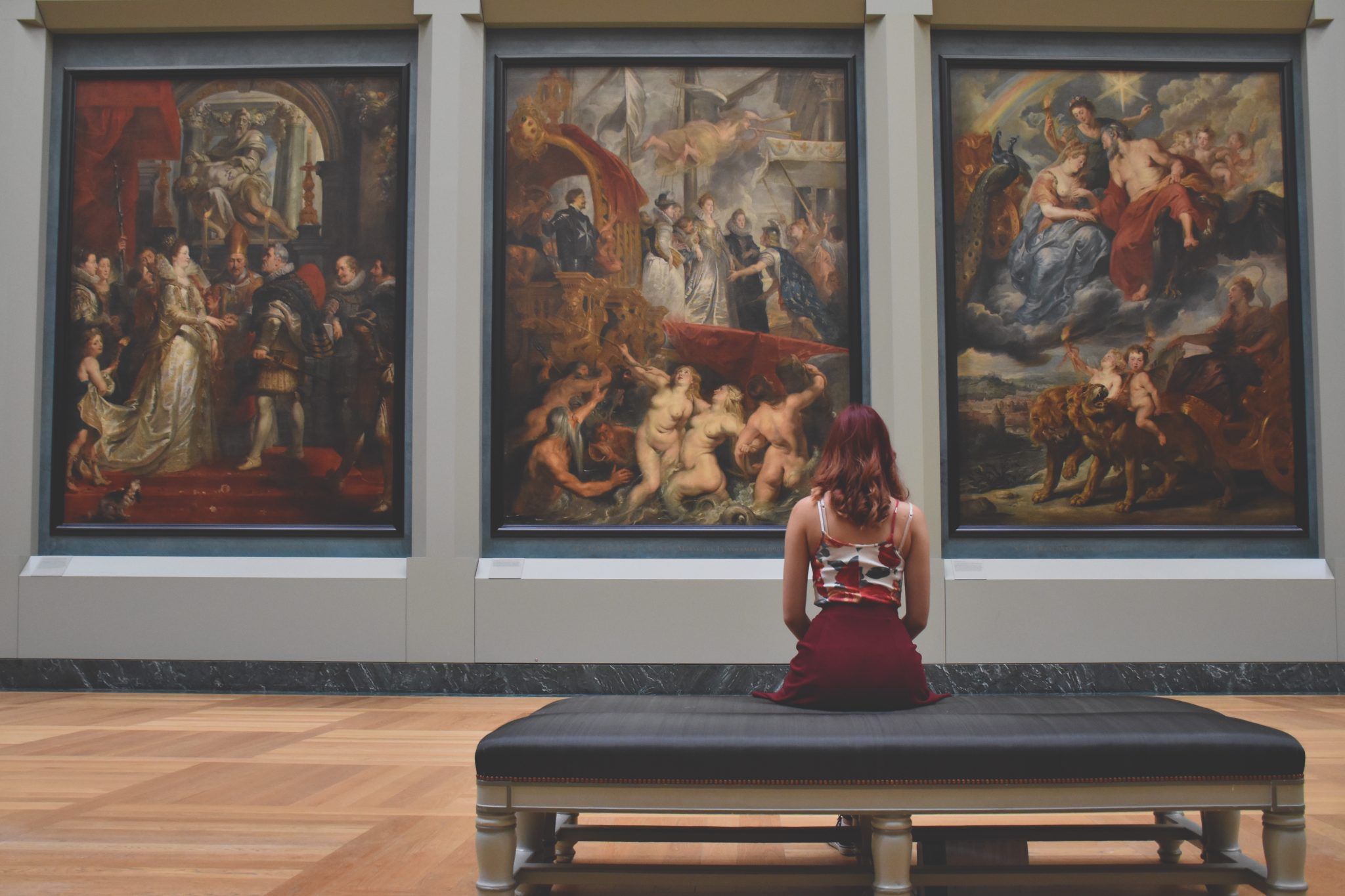 Heritage, hegemony and the West: A panoramic view of power dynamics in the heritage sector

Image Credit: Pxhere. Description: a woman viewing some paintings in a gallery.

Not only is it considered normal to hold foreign art in museums, but it’s almost perceived to be the role of these institutions. Can a museum ever be able to represent accurately a heritage and a set of work that doesn’t belong to the specific cultural context in which it is presented? Or represent a heritage that is the result of conquest? The philosopher Walter Benjamin, in his essay On the Concept of History, discusses how the hegemonic power, the winning power, will always be treated with sympathy by history: “with whom does the historical writer of historicism actually empathize. The answer is irrefutably with the victor. Those who currently rule are however the heirs of all those who have ever been victorious. Empathy with the victors thus comes to benefit the current rulers every time”. Taking this into account, is it possible to design a museum that is able to properly represent the experience and heritage of minorities?

This issue is particularly pertinent depending on what role we see the museum having. It could be a neutral storage place, somewhere to conserve and look at an object, or a place capable of influencing our own perceptions of the world. Sociologist Peggy Levitt believes that, for many, the museum is simply a place of collection and conservation. “Is there no place in which visitors a simply delight in the beauty of the objects? Despite their colonial past, certain ‘universal’ institutions have done a fair job presenting the world heritage for centuries”, she says in her work Artefacts and Allegiances. The problem with this widely held view is that it presents museums as perfectly neutral places, in which people just stare at objects without being influenced by the narratives they present. But the reality is that museums are not “neutral places”; but, on the contrary, the museum’s “social power extends far beyond their buildings. They each play some part in influencing how we envisage and talk about a nation, and their place in the world”.

… if it is true that in modern society hybridization and exchange of cultures has become unavoidable, it is dangerous to associate this idea with the museum.

The museums of Europe and America are filled with artworks that didn’t originally belong there, artwork from various cultures that are scattered all over the West. These objects were obtained in many ways, and the history of some objects is more controversial than others. Recently, there has been an attempt to rehome some of these works. For example the Elgin Marbles, held in the British Museum. These artefacts are named after the man that stripped them from the Parthenon in the early 1800s and brought them to England; he did this under the rationalization that moving them to England would better preserve them. The Greek Government has made it clear that they want them back, but the British Museum has never complied. And this is not the only controversy that the British Museum has been surrounded by. During an Aboriginal exhibition they were planning to have, Aboriginal activist groups organized protests because they wanted back what they rightly regarded as their property. This problem permeates most collections around the world.

In defense of this situation, art historian David Joselit argued that in this era in which images are endlessly movable and reproduceable, a result of the gigantic spiderweb that is the internet, the fact that these works are no longer site specific is almost inevitable. James Cuno, the Director of the Jetty Trust, recounting his first visit to the Louvre, said “I was not the lesser for not being from these magnificent cultures. They were not inaccessible to me, though in many cases I had never heard of them. They were not foreign in the sense of being of another culture. They were mine, too. Or, rather I was theirs …. And I looked at them in wonder, too; in ways, I imagined, their original beholder looked at them”. According to Cuno and Joselit, possession does not depend on one’s culture or special knowledge, but on empathy and the connection that one feels for the object. However, if it is true that in modern society hybridization and exchange of cultures has become unavoidable, it is dangerous to associate this idea with the museum. This does not mean that there should be a cultural segregation and that artworks belonging to a specific country shouldn’t enter another, but it’s necessary to be particularly careful around the display of these objects.

Even though the contemporary museum is considered by the public to be a completely neutral space, it’s been often argued that this sense of neutrality is an illusion. The pristine white aesthetic of museums and contemporary art galleries is considered fundamental in creating that illusion of impartiality and objectivity. Miwon Kwon discussed this in One Place After Another; “The modern gallery/museum space, for instance, with its stark white walls, artificial lighting (no windows), controlled climate, and pristine architectonics, was perceived not solely in terms of basic dimensions and proportion but as an institutional disguise, a normative exhibition convention serving an ideological function”. This function is precisely to construct a space that makes the museum’s narrative look objective and unquestionable by the public. “The seemingly benign architectural features of a gallery/museum, in other words, were deemed to be coded mechanisms that actively disassociate the space of art from the outer world, furthering the institution’s idealist imperative of rendering itself and its values “objective”, “disinterested” and “true”.

… museums must make the viewer aware of their lack of neutrality and invite us to think critically about the narratives that are presented in front of them.

The problem with this sense of objectivity is that it makes the viewer absorb information imparted by the museum without questioning it. A Western-centric vision of the world is a common idea presented by museums that we take for granted. The West is presented as the pinnacle of modern human civilization, and with everything that took place in the world happening prior to Western culture existing. Many collections situate and curate objects so that the viewer has the feeling of moving through a sort of line in time, reaching Western Culture as an end point. This is the reason why in historical collections Sumerian and Babylonian artefacts are presented first, then one moves to Egypt and then to Greece. In this way the narrative presented is that there has been a steady evolution of cultures and the first are less sophisticated than the others. Furthermore, by decontextualizing these cultures from their original geographic sites, the message conveyed is that what is presented is the best that the geographical region was able to produce, and what came afterwards was just decadence.

This is not just the case for collections that focus on ancient history, modern museums also sometimes take this approach. In Claire Bishop’s essay Radical Museology, she uses the example of the MoMA New York, where the “guiding narrative is a linear historical time, advancing towards the future on a Western-centric horizon”. Going back to initial question of whether a museum can successfully present artworks that don’t belong to their hegemonic culture – the answer is yes. We just have to stop thinking about museums as places where artefacts are stored and viewed, and start thinking of them as places in which a discussion can be initiated.

The most important thing is that museums must make the viewer aware of their lack of neutrality and invite us to think critically about the narratives that are presented in front of them. For example, Bishop also discusses the museum Reina Sofia, which hosts a series of workshops in which teenagers are invited to think critically about the role of the museum. These workshops, called Viewing the Viewer, are a place “in which teenagers are made aware of the museum as a discursive apparatus”. This teaches us to see the museum as a place of discussion and intellectual engagement, rather than of passive learning.

Another interesting example of how to do things differently is discussed by Bishop who cites Manuel Borja-Villel, the director of the Reina Sofia. Bishop argues that he presents the world from the perspective of the Global South, “The starting point for this museum is therefore multiple modernities: an art history no longer conceived in terms of avant-garde originals and peripheral derivatives, since this always prioritizes the European center and ignores the extent to which apparently ‘belated’ works hold other values in their own context.”

Therefore, the museum is a place of learning, and for some people the only occasion of being in contact with the heritage of another culture. However, museums must change the approach of how these works are presented. They must eliminate any pretense of neutrality and steer away from presenting a linear approach to modernity. In this way, museums will be able to become places of discussion, which is what these institutions are meant to be.