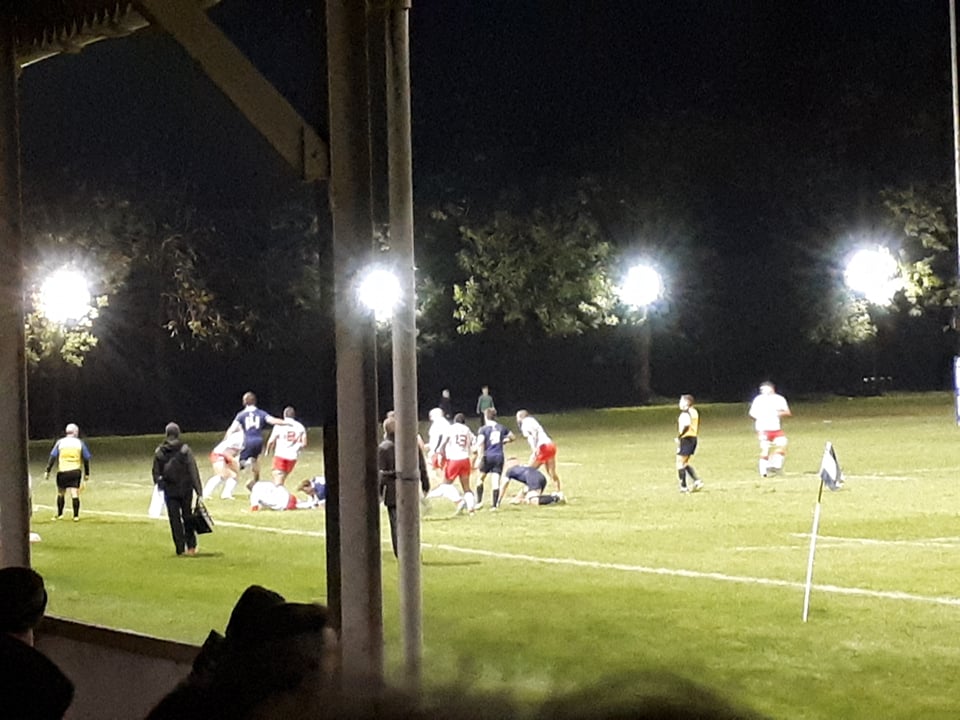 The Oxford University Rugby Football Club Men’s Blues gave an excellent account of themselves but ultimately failed to continue their good run of form against a challenging Canadian national team, losing 26-20.

The Canadians came to a buzzing Iffley Road stadium at 7:15pm on a chilly October evening. The Blues brought bags of energy, tempo and desire to the game but the experienced Canada team outmatched them in their technical skills. At half-time, the game was 14-13 to Canada but the free-flowing rugby we saw in the first half got bogged down in the midfield in the second half, while Canada managed to pull off some impressive breaks.

Oxford were first on the scoresheet after putting unyielding pressure on the Canadian defence for the first 10 minutes. Tom Humberstone scored a penalty to put the Blues 3-0 ahead. Canada responded immediately with a try despite some excellent try-line defending from Oxford. Cornish Pirates player Matt Evans scored the try with a devastating burst of pace down the wing. Nottingham’s Shane O’Leary converted successfully and after 14 minutes; the score was 7-3 to Canada.

The Blues hit back decisively. On 17 minutes, Sam Miller made a stunning break through Canada’s back line where Jasper Dix bundled it over the line for Oxford’s second try. Despite the difficult angle, Tom Humberstone converted again to make the score 10-7 to Oxford.

Following the explosive first 20 minutes, the game passed into the same inconclusive midfield battle that came to typify the second half. A fox appeared behind Canada’s posts, sauntered around, and then disappeared into the trees.

On 29 minutes, Oxford extended their lead with a penalty from Humberstone, won by a blistering run from Ed David down the wing. Nevertheless, Oxford were pushed back by Canada and despite some crunching tackles at the back, Canada’s Luke Campbell scored a try on the 36th minute which was converted by Shane O’Leary. The score as the players went in for half time was 14-13 to Canada.

Canada brought on a few pairs of fresh legs after the break, but the Blues were unchanged until quite late into the second half. Oxford defended well at the start of the second half, winning a scrum after a very rapid Canadian break. Nevertheless, substitute Guiseppe du Toit scored a try on the 53rd minute, doing most of the running himself. Shane O’Leary successfully converted, putting the score at 21-13 to Canada.

Canada followed up with another try on 65 minutes, which was Matt Evans’s second try. He got the ball across the line despite Coventry’s Robbie Povey being crunched in the tackle just in front of him. Nevertheless, Shane O’Leary missed the conversion from a difficult angle and the score stayed at 26-13 to Canada. The match ended with a strong run of play from Oxford which culminated with a penalty try. If the game had lasted five minutes longer, there is a fair chance that Oxford could have won. But both teams had definitely ran out of steam by the last ten minutes of the match and either could have collapsed at the back.

Canada is currently ranked 23rd in the IRB world rankings, above impressive rugby nations such as Kenya and Germany. They played Oxford on Wednesday before heading off to France to play in the repechage tournament, in order to qualify for the World Cup. The tournament is fought between four teams who have not met the regional requirements to qualify. Canada have been at every World Cup since the inaugural tournament in 1987; however, Kingsley Jones, Canada coach and former Welsh international, has admitted that the team has struggled in the previous two years and that winning the repechage would be a difficult task. The Canadians currently have a 34 man squad and play a second warm-up match against Coventry next week. Players to watch will be Tyler Ardron of the Exeter Chiefs and DTH Van de Merwe of Glasgow Warriors.

Nevertheless, the Blues appeared unstoppable when they went into the match on Wednesday. Following a very successful pre-season tour in Madagascar, the Blues were unbeaten in their first four matches. Rugby is Madagascar’s national sport and OURFC’s visit was a major spectacle: the team played in front of 30,000 people and met the Madagascan minister for sport, all on national television. They gave the Madagascans a tough challenge, having lost the first match 39 to 35 but winning the second by 28 to 22. Their first home win was to Australian team Eastern Suburbs, which finished 24 – 7. Their next victory, 102-0 to the Blues against the Pacific Islanders, might seem like a walkover but the Islanders’ squad featured Fiji 7s player Pio Tuwai, as well as former international, Nicky Little. The Blues then went on to defeat the highly physical Army and Navy teams.

OURFC fielded a very strong squad against their impressive opponents. Those who played included Joe Morris, an England u20s and Worcester prop; George Robson who has played for the England Saxons, for England (Tourist to South Africa but uncapped) and the Harlequins where he became Premiership winner and captain; Conor Kearns, who recently returned from captaining the USA Select XV in the Americas Pacific Challenge and Ben Ransom, who has played for the Saracens and London Irish.

In addition to the action on the pitch, attendees were also treated to a barbecue, pitchside bar, live music and a raucous fanzone. The crowd was of a great mix of ages and there was plenty of Oxford and non-Oxford sports stash on display. The Canadians had turned up in numbers too and we spotted a few maple-leaf flags around the stadium. I bought a pint of Carling and a can of coke for £5, which is the most reasonably priced refreshment I have ever bought at a sports event, served in an attractive OURFC cup.

The Oxford men put in an exemplary display and definitely appeared the hungrier team on the night. It is a shame that the result does not do justice to their effort, but they did the whole of Oxford proud in this historic fixture. After giving the Canadians a guard of honour, the crowd left in high spirits, chanting all the way down Iffley Road. Our OxStu man of the match is Ben Ransom for his calm and collected performance at the back. A shoutout should also go to Tom Humberstone for his 100% conversion rate under pressure.