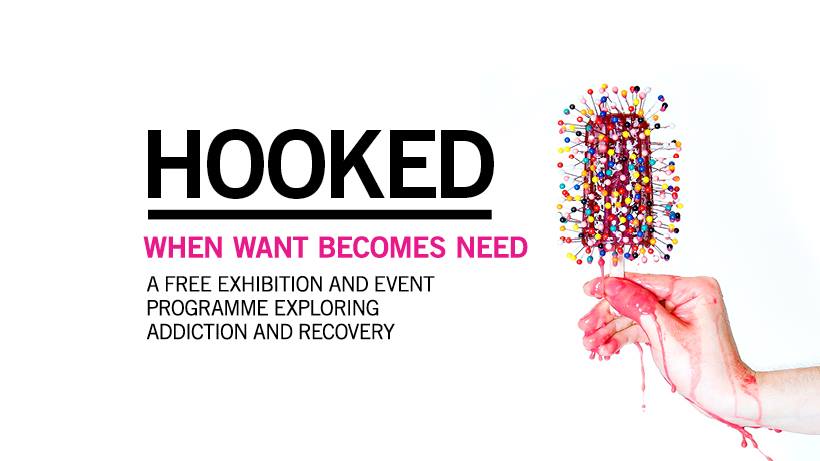 I had come across The Science Gallery’s motto, “Where art and science collide,” months before I officially made the move to England. As an art historian and curator, this short statement had me wondering what kind of experiences one could expect to have in an exhibition space that brings art and science into dialogue with one another, and how  this conversation changes the dynamics with visitors. Though The Science Gallery was first founded in 2008 in Trinity College Dublin, it soon grew into a chain of galleries spreading this mandate through the foundation of the Global Science Gallery Network in 2012 with the aim of creating the world’s first university-linked network dedicated to public engagement with science and art. With many of their new locations opening up in the next two years, including Bengaluru, Melbourne, and Venice, I was happy to visit The Science Gallery London, (which opened this past September) and venture into their current exhibition, Hooked: When Want Becomes Need, to find some answers to my questions.

Hooked aims to have us question what makes us vulnerable to addiction as human beings, and prompts us to understand the social impact of addiction. Curated by Hannah Hawes and informed by King’s College London researchers’ understanding of addiction as a global health issue, the exhibit tackles heavy topics such as ‘speed of light’ (being addicted to technologies), ‘free will’ (inquiring into the underlying influences and pressures that can lead to addiction), and ‘safe from harm’ (asking when does addiction harm ourselves and those around us?). Hawes was very much aware of the challenge in curating a show like this. In our interview she mentioned that her and her team made sure to “take advice from people in recovery” to ensure “not to glamorise or moralise addiction.” With a target audience of 15-25 years old, Hawes emphasised how essential it was to instigate a curiosity-led experience. And this she believes – and I strongly agree – can be obtained through the collision of art and science in the gallery space.

Upon entering the exhibit, you are confronted with decomposing tables made out of sugar, a curtain of pawned off wedding rings named ‘broken dreams’, an interactive game that watches you while you play it, and a slot machine that spits your money right back out at you. Hawes brilliantly curated a mixture of mediums and themes that explores various issues concerning addiction and recovery. Moreover, Hawes revealed to me that while certain works of art were already completed, with others in the process of being made by artists, others were commissioned by the Gallery to be created in collaboration with Kings College scientists and laboratories. This is really interesting to note when considering why one would want to bring art and science together in the first place.

“…science can be really heavy and dense. Using the science as a springboard can make art and science more accessible to each other.”

Science Gallery mediator, Rosalind Reynolds-Grey expressed to me how: “Science can be really heavy and dense. Using the science as a springboard can make art and science more accessible to each other”.

Having spent some of her studies writing on art and addiction, Reynolds-Grey was drawn to the Gallery and this exhibition in particular, excited that a space was being created, as Hawes had hoped for, where there would be a democratised place for artists, scientists, and the general public to feel welcome. Though it may appear so, Hawes tells us that this is not something new, “that science specialist-places invite artists” all the time, but it has not been the case that they are considered equal.

When asked what she thought art’s role is in science communication today, Hawes’ rightly pointed out that “it is quite a vexed question, and I think any suggestion that art has a role is going to be met with scepticism.” She acknowledges that “as the sciences have moved into micro or macro industries, you don’t have the same artefacts and objects that you have from the industrial age, which told their own stories.” Contemporary science, however, immediately presents people who want to showcase these stories with a challenge. “Artists are really good at telling stories, finding interesting research links, making things look visually interesting, and coming up with strategies for people to raise their own questions,” she notes how they are therefore perfect partners in crime, so to speak, to help answer the question: “How do you present science in a sensorial way?”

The combination of these two fields “work best when there is an equality and respect,” says Hawes. In doing so, the Gallery not only created a superb collection of works that look into the artistic and scientific explorations of addiction and recovery, but also that provides an immersive educational experience. You can see this in many of the works in Hooked, such as in Varvara and Mar’s, working with neuroscientist Mario de la Fuente Revenga, Detecting Alcoholism, Not Just Us, Small Addicts (2016). A 360° VR headset brings you right into the mouse’s experimental environment. Not only are we given access to a laboratory experiment that otherwise would have never been seen by the general public, but we are also given insight into a parallel between artistic and scientific creative processes into the inquiry of the effects of intoxication.

“As soon as you bring that work and dialogue into a space that calls itself science-anything, there is a slight alteration and what I think is interesting with the science gallery is that by calling itself Science Gallery, many people will come to it with the expectation of a science experience”

The curator’s aim was to create a space that is both “contemporary and temporary,” so that it may respond and adapt to fast-changing attitudes to advancements of science and technology. Hawes comments: “As soon as you bring that work and dialogue into a space that calls itself science-anything, there is a slight alteration and what I think is interesting with the Science Gallery is that calling itself ‘Science Gallery’, many people will come to it with the expectation of a science experience.”

When you walk into the exhibit you definitely feel like you are in an art gallery space. I believe the accompanying texts really cement this art-science collision in how they blend overall themes and questions with artistic responses and scientific investigations.

The highlight of this exhibition was definitely the wide breadth of art and scientific mediums used to explore questions of addiction and recovery. Specifically, I fell in love with the Atelier 010’s Sugar Rush (2016-17), which was developed in collaboration with the Delft University of Technology. Using sugar to fashion a series of coffee tables that slowly melt away once in contact with water, they brilliantly represent at once an addictive substance, that of sugar, and the impermanence of a state of addiction and/or recovery.

In short, I would highly recommend this exhibition to anyone, regardless of your level of interest in art, science, or addiction. As Hawes explains, the Gallery’s role “is not to explain, but to provoke questions.” I felt this most strongly when standing in front of Jonah Brucker-Cohen and Benjamin Grosser’s work, Please Don’t Like This (2015), which directly confronts people’s addiction to ‘like’ things on social media. I stood in front of a screen that said “Please don’t like this” over a ‘Like Button’. The middle of the screen indicated how many people had in fact disobeyed the command of the artwork and liked the button, which was 239 when I was there.

And there it was, I was completely transfixed. Not only did I feel compelled to press the like button, but I was very aware of the fact that the artwork was tempting me, challenging me even, to not engage with it. It encapsulated so many of the questions and issues of the exhibit and brought out of me a sensation I couldn’t easily shake, a temptation that transformed a ‘wanting to like something’ to ‘needing to like it’. Art and science had come to a complicit collision, and in that instance, I was hooked.