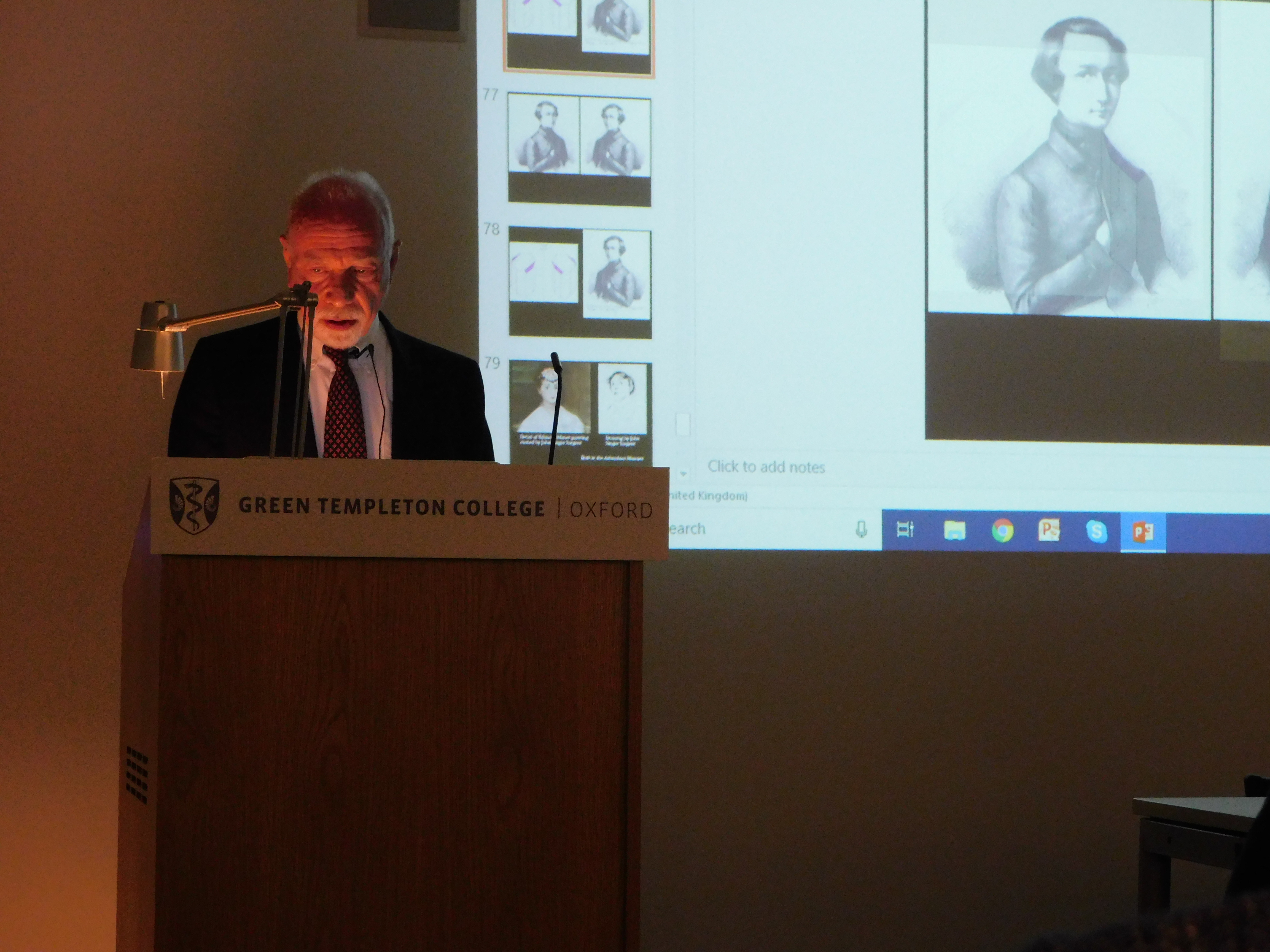 The McGovern Lecture: “Louis Pasteur and the Pleasures of Art”

On Wednesday 25 October 2018, Dr. Bert Hansen, author of Picturing Medical Progress from Pasteur to Polio: A History of Mass Media Images and Popular Attitudes in America (2009) came to Green Templeton College as this year’s McGovern Lecturer on the history of medicine (endowed by the late Dr John McGovern of Houston Texas, a long-term friend and supporter of the College) to present on the little-known life of French biologist, microbiologist and chemist Louis Pasteur. Known as the man who never smiled, Hansen was intent on looking at the artistic side of this scientist’s life and giving colour to what had been, until now, a flat characterisation of the workaholic scientist. Hansen proposed that Pasteur recognised the power of the fine arts and that it shaped his stature. Not only did Pasteur produced charcoals, pastels, and lithographs in his early years (leading some to believe he perhaps was looking into a future in the arts), but he repeatedly positioned himself among artists, where he was thought of as a peer.

But why would a science historian want to look into this aspect of Pasteur’s life in the first place. Hansen stated in his presentation that he has hoped to, “by looking at [Pasteur’s] work in the arts, rather than just his work in science and medicine, give us a more humane and human figure.” Besides personality, Hansen also alluded to possible skill transference which Pasteur could have potentially benefitted from his work in the arts. Hansen points out that Pasteur often saw things that other people overlooked: “A young man able to capture these features so successfully who would become a laboratory observer”.

“A young man able to capture these features so successfully who would become a laboratory observer.”

Pasteur’s circle of artists friends included Paul Dubois, Max Claudet, Jean Jacques Henner, Albert Edelfelt, Leon Bonnat, Lucien Laurent-Gsell, and others. His legacy was cultivated through the arts, Hansen demonstrates, through a number of works produced by his artist friends of his discoveries and work in the lab.

This prompted an important question: Why did artists stop immortalising moments of discovery in science? Moreover, what can we benefit from colouring in the personalities of these major figures in the history of science, as Hansen has done with Pasteur? I strongly encourage all who are interested in Pasteur’s life and work, or in the discussion of art and science history, to check out the full talk, which will be available shortly in a podcast. It is possible to find on the web an illustrated booklet of an earlier version of Hansen’s book with about 20 images free to download here.

Dr. Bert Hansen currently teaches at Baruch College of the City University of New York. Professor Hansen holds a bachelor’s degree in Chemistry from Columbia and a PhD in History of Science from Princeton. Trained as a medievalist, Hansen’s early career examined the relations between natural sciences and magic from the thirteenth to the seventeenth century.