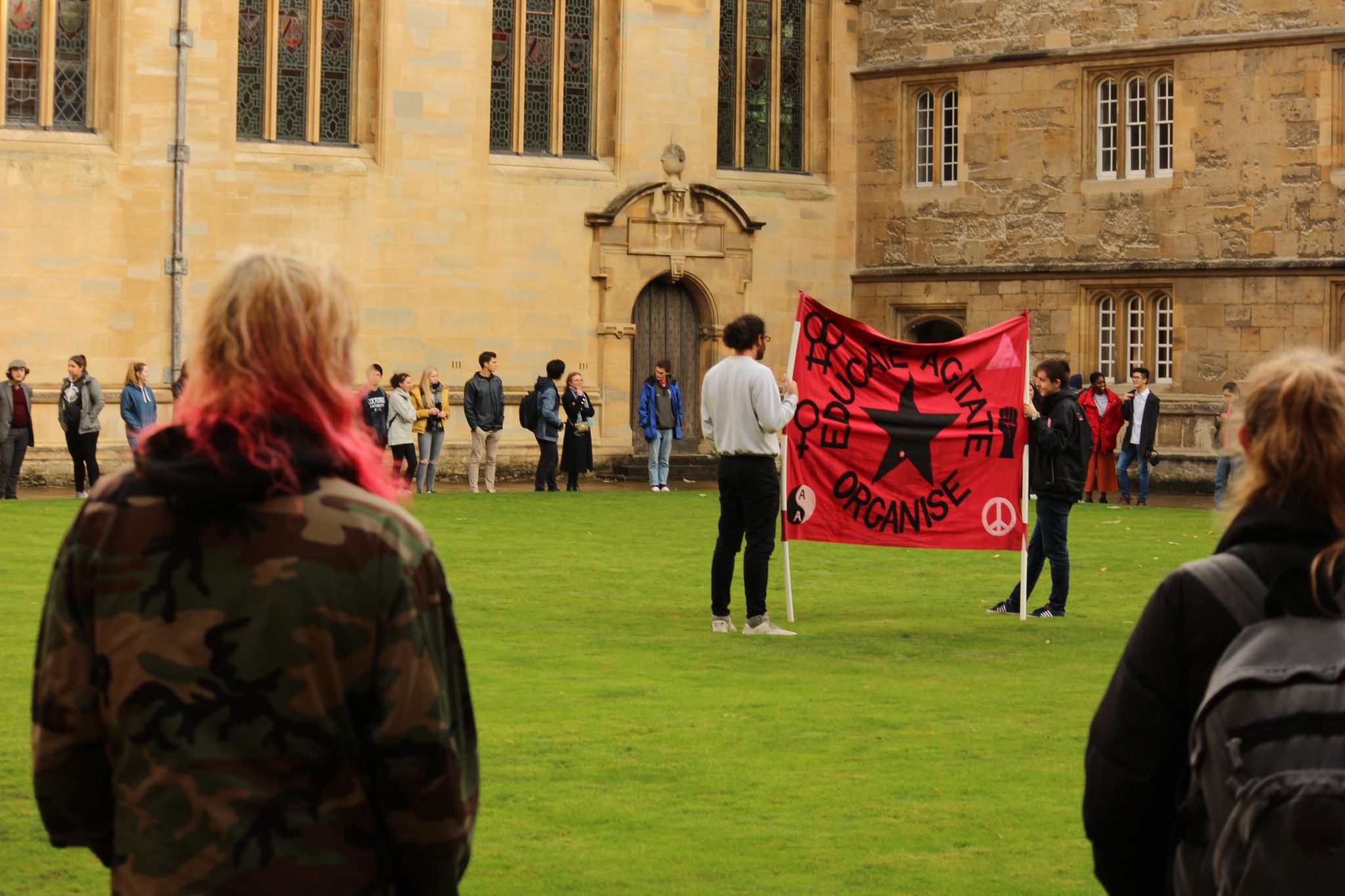 Wadham students occupied front quad in protest of the Governing Body’s attempt to set rent in the the new Dorothy Wadham building at £700 per month on a compulsory 9-month contract, totalling £6300 per year per student.

The building was meant to provide affordable, college-owned accommodation for the college’s 2nd year undergraduates, who currently have to live in privately rented accommodation. Rent in the Dorothy Wadham building as currently predicted will cost more than most students at Oxford pay for 12-month private contracts, and the college will not offer undergraduates contracts for less than 9 months. This is despite the fact that most students in Oxford stay for the duration of term time, which totals about 6 months of the year.

In response to this high cost, Wadham SU decided on Sunday that their official position is that contracts for the new accommodation block for the year 2018/19 should be £550 a month, on a term-time (6 month) contract. The motion passed unanimously.

The SU has mandated the President to present the SU’s proposal to a meeting with the Governing Body in 5th week. In the immediate term, the SU has urged undergraduate students not to participate in the college-run room ballot circulated this week.

In the event that the Governing Body refuses to meet, the SU also called for a sit-in protest on the Front Quad during the hours that the Governing Body would have met and to leaflet its members and tutors about the accommodation contract. Further escalation is proposed to occur if “an agreement is not eventually made that the SU deems acceptable.”

This escalation will, for the SU, consist of refusing to run a room ballot or participate in any college-run room ballot and informing other common room presidents (including the MCR President) of the actions of college. The SU has also discouraged undergraduate students from moving into the building, and will inform the media and alumni of the college’s rent proposal.

The final measure proposed by the SU is a ballot for a rent strike: this would mean that students would not pay rent on their Hillary Term 2019 battels, and would look for private accommodation for second year instead of moving into the Dorothy Wadham building.

The motion describes the SU’s motivations thus: “Wadham College should provide truly affordable accommodation for all of its undergraduates, especially if it means to attract applicants from low-income backgrounds.”

It continues: “£700 a month on a nine-month contract is not affordable accommodation for most Wadham students.”

Commenting on this, an anonymous student at Wadham College, told The Oxford Student: “A motion was passed in the SU meeting on Sunday laying out students concerns with the current proposal for rent at the new Iffley Road site.

They added: “Students have agreed on what they believe to be a fair rent and this will be presented to college in the hopes of working out a solution that works for everyone. We remain confident that this will be resolved amicably through the ongoing negotiations.”

In the email which released the minutes of the SU meeting, Joe Lovell-McNamee, SU Vice President, said: “We can get a better deal on the Dorothy Wadham Building, but this involves collective action from all students. I want to impress the importance of this to all first years who may feel they need to ballot [for a room on the site] anyway; as a student body we are currently engaged in negotiations to ensure that you get affordable and just rates of rent for your secondyear.”

The motion also detailed reasons that the SU believes Wadham should not have attempted to charge this much at all. It says: “Wadham has a bigger endowment than the Universities of Goldsmiths, Swansea, Reading, Cardiff, and SOAS, combined […] with its substantial endowment, [it] can afford to provide affordable accommodation for its students.”

The statement continues: “Wadham College should have considered the rents of Iffley Road when considering the costs of construction of the Dorothy Wadham building.”

As students gathered around the quad, chants of “Iffley! Five fifty!” erupted. Oaisis’ 1996 hit “Don’t Look Back in Anger” was played out through speakers.

One Wadham student speaking to The Oxford Student said “The demonstration is intended to show the Fellows the high level of student engagement on this important issue of affordable living for students”.

A Wadham student present at the protest told The Oxford Student: “It’s a disgrace. Wadham needs to make their actions like their words. The college claims to be accessible but the accommodation is unaffordable”.

During the protest the Vice President of the Wadham Student Union gave a speech in which they stressed “We are not radicals. We are not asking for much”. They later told The Oxford Student “In line with a motion passed unanimously on Sunday, Wadham SU students gathered on front quad to demonstrate their dissatisfaction with current proposals for the rent and lease terms of next year’s second-year off-site accommodation. For the half an hour before governing body was set to meet, we thought it important to show that the opposition to unaffordable and unfair rents was far-reaching throughout the college, and can’t simply be brushed off as the view of a small vocal fringe.”

The site of the building has previously been involved in controversy when, during the winter of  2016/17, a group of 14 homeless people took up residence there, sparking student protests and a petition by Iffley Open House when Wadham College attempted to force the group to leave. Construction of the Dorothy Wadham building began shortly after the college’s efforts to remove the group were successful.