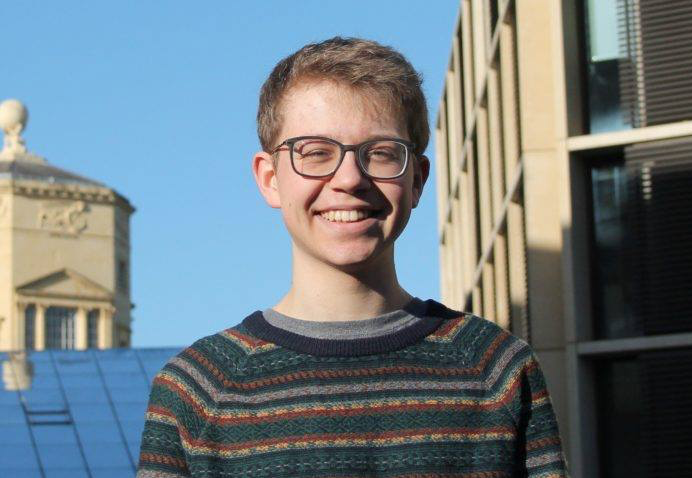 Joe Inwood is the current President of Oxford University Student Union (SU). He is a graduate of Mansfield College and stepped straight into the role after completing his degree. He grew up in Manchester and has a slight Northern twang, noticeable to fellow Northerners like myself. I find him in SU and we head into one of their meeting rooms.

What was your experience as an Oxford undergraduate?

I have always had a sense that I should do things that benefit others in a really simplistic way. And I’m not someone who has done a huge amount of charity work, I’m not someone who has volunteered very much. But I am someone who has a sense of duty. So, the natural thing for me was to get involved in the college JCR, because it was the community I was living in. I thought in a very small community like Mansfield, often someone has to stick their neck out. I think that Oxford is sometimes overwhelming because it’s very complex and it’s just an institution that is so old and massive. When I first arrived, I couldn’t even begin to understand it fully. All you can really understand is the bit of it you occupy and your immediate surroundings: your friends, your neighbours, and your course mates. So, it started from that; thinking, “What can I do to make this experience a little bit easier for everyone else?” That was how I ended up running for JCR President. I didn’t really know what I was doing when I started. I was clueless as to how Oxford actually worked, and how much it was possible to change. I’ve since discovered that students are way more powerful than you think. Oxford can make you feel very small, and our collective strength is greater than I think we actually realise.

Where did your decision to run for SU President come from?

I hadn’t had that much involvement with the SU before I ran. I was actually nominated anonymously through the website with ‘Nominate a Mate’, where you can just put someone’s name in with a position you think they should run for. Then I got an email from Kate Cole, the last president, saying, “As you should know: you’ve been nominated by a friend to run for my job.” And I just saw it and laughed. My friend was there at the time and I read it out and I said, “Look what I’ve just got.” And I thought it was just quite funny, but they just said, “You’re going to run, aren’t you?”, and I was like, “What?”, and they said, “No, I know you are.” I was thinking,  “Where is this coming from?” But it became a process of running the idea past people. And I’m very lucky to have been surrounded by very supportive people who told me to go for it. And here we are.

What is your aim for this year?

I want the SU to be the platform for students to create change at this university, because there is so much incredible activism going on across colleges, departments, everywhere, but it works best when coordinated. And I want the SU to be able to speak for the student body with authority and have the University listen. I think the University does listen. I think one of the side-products of the collegiate system is that our voice is split up into lots of different pieces. And when you speak to common room presidents, graduate and undergraduate, they often have the same concerns. Things like the student mental health crisis, rent, cost of living, and concerns about the University more widely, such as undergraduate access, elitism, and all the structural things that Oxford is yet to reckon with. So sometimes it feels like there is a missing piece. And I think the missing piece is the Student Union. I’m very honest about our weaknesses and the collegiate system makes our job quite hard in some respects, but it’s also a fantastic resource. There are students in every college who are organising to create change on their terms. So better supporting those people, and making sure they know that the SU is the place to go, is the goal for the year. And also, I’ll be very honest, it’s not just going to be me in this year, it’s a long-term process. I’m building on my predecessor and I’m hoping that my successor will build upon what I’ve done. And the organisation has come a long way. OUSU, as it was, was quite troubled for many years. We had some real problems with engagement and with not always focussing on maybe what we should be focussing on. I want to make sure the SU focuses on what students care about most.

What do you do on an average day?

I only have an average day as much as any student ever has an average day. This job is very unpredictable: things happen and you have to respond. I spend a lot of my time meeting with the University leadership, whether its pro-vice-chancellors, or college heads of house, or senior tutors, and I spend a lot of time saying the same things to different people; the University is big and we are a small student union. Day to day, I spend a lot of time in meetings, a lot of time in committees and reading huge stacks of papers for committees. I am that critical friend in committee and get wins by compromise, collaboration and playing the system, really. You have to be smart about how you approach the University. There is no point in banging the table: I get most done day to day behind the scenes through working with allies. You build networks of allies, and then that’s how you get things done. You don’t need to persuade everyone in the room. You just need to persuade the critical mass, enough of the room and then they follow with you actually. But if you position yourself as the outsider and if you fashion yourself as the student radical, it is so much easier for them to ignore you.

Do you think you’ve developed and learnt about yourself in this role?

I’m learning how to listen better, and how to be honest about my weaknesses. I don’t want to be one of those leaders that thinks that strength is all about making people do things against their will. I’m learning a lot about leadership and how to take people with you. I’ve definitely become more confident, and my life now as SU President gives me drive and motivation and a really clear sense of purpose that gets me out of bed on a morning. It does give you energy and it reminds me that it’s not just about me or about the SU. It’s about students: trying to make it a little bit easier to be a student.

What are your plans for your future?

I want to go back into education. I miss studying. It sounds really weird but I do miss it. And I loved my degree. Despite everything I do want to carry on, so I would like to do a masters but outside of Oxford. You can spend too much time here. I think this is my last year.

What do you want your legacy to be?

Two things. One of them is that this organisation, Oxford SU, is an option for everyone, and everyone feels like they could walk through the doors and get involved, with no preconditions or connections necessary. Absolutely anyone. And the second one actually is that by the end of this year, the University will have said that the mental health of its students is important, and not only is it important for students, but for the University itself. It’s important for the day to day functioning of the University. It goes right to the heart of why we are all here, and you could say the same about access as well: and those are my two policy priorities. I really feel like there is a moment this year on both of those issues: undergraduate access and student mental health. The arguments that students have been putting forward for years are finally beginning to intersect with the national mood and put pressure on the University for action. My entire philosophy in life has always been ‘Promise a little, deliver more.’ It would be so easy in this role to get really carried away and think you’re going to change everything over night and then fall short. But at the same time, Congregation, which is essentially the University’s parliament, met in the Sheldonian yesterday [Tuesday 31 October 2018] to approve the five-year strategic plan. We made the case on mental health and we were assisted by an academic who made a speech about access, and the Vice-Chancellor stood up and said: “It seems like there is support for the plan, with the important caveats that we must do more on both access and student mental health”. That will go on the record and will be part of this University forever and that keeps me cheerful. But the end of the year is a long way off and I’ve only been in term-time for four weeks. There is a long way to go, and lots will happen. It’s difficult to even imagine June right now. But at the end of the year I want to be able to look back and think, I gave it everything and something changed as a result; I don’t want to think I missed that opportunity. I don’t want to think that I got distracted or lost track of what was important.