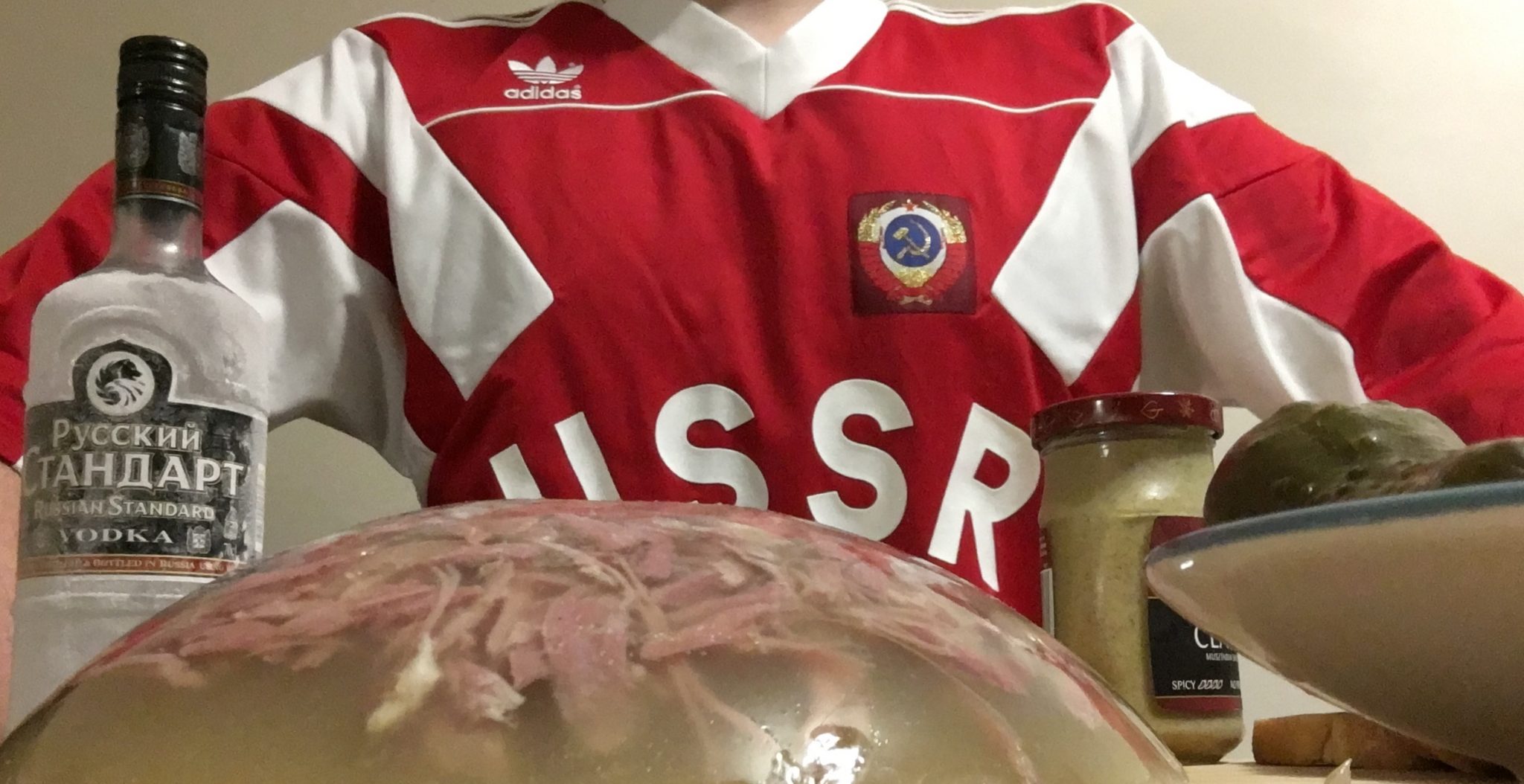 One hundred and one years ago, the world was changed forever: the Russian Revolution would sweep aside the Tsar, and the empire he reigned over, replacing it with a new society, one which promised peace, bread and land. However, not every aspect of the old world was eliminated, one vestige of traditional Russian culture survived, and was elevated to an even more prominent position under the new regime: kholodets, the notorious Soviet meat jelly.

Because apparently it is more socially acceptable to celebrate the Soviet Union, despite all its atrocities, than it is for other regimes, I decided to attempt this dish, knowing that this could well turn out to be a disaster on par with Chernobyl (maybe a bit of an overstatement). On paper it seems to be truly horrific: shredded meat (usually pork or chicken) encased in a jelly made from boiled trotters, and on a plate it is even more horrific. I suspected that even Lev Yashin would be unable to save this dish – and I could well end up with a one-way ticket to Siberia from my flatmates.

But what did Lenin do when the Whites were pushing deeper into the industrial heartland of western Russia? Well, he unleashed War Communism on the people, with the Cheka’s brutal requisitioning of grain to feed the Red Army leading to millions of deaths and further worsened an economy already crippled by war and revolution, but he also persevered. No dish is incapable of redemption, apart from avocado on toast, and so, for the glory of the Motherland, I boldly set out to secure my ingredients.

From the Covered Market I seized three trotters, at 60 pence each, and a whopping great smoked ham hock for a couple of quid – considering that this was a dish,  and indeed, still is a dish, often served on special occasions like New Year’s Eve, or Brezhnev’s birthday (probably), the constituent ingredients were remarkably cheap, but then again I suppose any food was better than no food, particularly when one considers the USSR’s not exactly glowing report when it comes to agricultural production. Life under Communism was often incredibly brutal, and this was reflected in the cuisine.

This is not a quick dish to make, in fact it is such a lengthy procedure that it requires its own Five-Year Plan and a Stakhanovite level of effort. The first step is to place your trotters and other pieces of meat, in my case a ham hock, into a saucepan. If you’re going to attempt this at home, you may want to use chicken thigh, you may also want to rethink your life choices and why you’re squatting in your poky little Khruschyovka kitchen boiling offal – I suffer by cooking this, you suffer when you read this: proper Communism. Cover your meat in cold water, I used about five litres, or one gallon if you are a western Imperialist spy, for the quantities I had.

I placed a lid on top, and boiled it for an hour and a half – realising that this is yet another offal recipe which involves boiling something for an absurd amount of time, but you need this time, and some more, as it is necessary to convert all the lovely collagen in the pig feet into gelatine, without which there’d be no jelly, and the world would be a slightly less interesting place for it. This is as good a time as any to crack open some vodka, and then remember what happened last time you drank and cooked, and then put the vodka away again – it’s more important to save it for when you try the monstrosity, unless of course you’re going to use the finished jelly to threaten someone you don’t like, in which case drink away.

“I revealed was a truly imposing sight: a monumental Kremlin dome of discoloured jelly – I had exceeded the jelly production targets.”

Ninety minutes have now passed, and so I add two halved onions, the cloves of half a bulb of garlic, slightly crushed to release their lovely aromas (this will help to mask the flavour of the jelly), a bay leaf or two, half a nutmeg (grated, of course), and some peppercorns. Boil for another hour, though I’m fairly sure time loses all meaning with this recipe. Once another hour had passed, I removed my ham hock, discarded the skin, bones and any gristle and started shredding away, remembering that this delicious, salty, smoky meat would soon be imprisoned in a gulag of gelatine.

I then ladled the jelly mixture through a sieve into a smaller saucepan (though I doubt that the Soviet Union had an abundance of ladles or sieves – they struggled to manufacture shoes correctly) and added my tasty meat to the steaming vat. I simmered it for a further hour, though that may have been pointless, like this entire recipe. At this point some Soviet citizens may well have boiled eggs to make it look pretty and cut carrots into the shape of hammers and sickles and Stalins, but I believe that a true Russian/Ukrainian/Belarussian/etc. would have served it without such bourgeois embellishments.

Once the time has elapsed, and you never want to hear the words “meat jelly” again, it is time to put your meat jelly mix into a mould in order to turn it into a meat jelly. Let it cool down to room temperature and then place it in the fridge to annoy your flatmates. However, in the Soviet Union this dish was usually served in winter, as houses were so cold that the jelly could set – though the increase in the production of refrigerators under Khrushchev in the 60s meant that this dish could be prepared all year round. In ten hours, give or take, your jelly will be set. The following evening I used the promise of my company and vodka (no prizes for guessing which one was the stronger motivation), to lure some people into coming over to have a look at it. I inverted it and unveiled it, and what I revealed was a truly imposing sight: a monumental Kremlin dome of discoloured jelly – I had exceeded the jelly production targets. This was socialist realism, in all its wobbly glory.

Before my guests arrived, I decided to put my meat jelly where my mouth is and had a slice and I can honestly say that it was amazingly not entirely repugnant. I had it with spicy mustard, bread, pickles and vodka, and together the combination sort of worked. The meat was smoky, the jelly had some depth from the nutmeg and garlic particularly, and, more importantly, it disintegrated in my mouth, though not so quickly that I couldn’t feel it rolling over my tongue like tanks across Eastern Europe. It was effectively a very, very gelatinous ham hock terrine.

Though I wouldn’t call myself a fan of the dish, I can see why, during those long winter nights, it might seem nice. It’s kitsch. Comrades Branea and Kanda then arrived and, having spent a good couple of minutes trying not to wretch at its appearance, they ignored all of my warnings and dug in. Commissar for Offal Branea decreed that the meat itself was quite nice, but the jelly was absolutely vile – though she spent a good amount of time beating the jelly and watching it gyrate, so clearly she appreciated the novelty value of a dish which would look at home in a nuclear bunker during the Cold War. General Secretary of the Party Kanda was even less impressed.

“Commissar for Offal Branea decreed that the meat itself was quite nice, but the jelly was absolutely vile”

Though cooking this took about as long as it took for the Bolsheviks to seize control of Russia, unlike the Russian Revolution, which promised so much, this slightly exceeded my incredibly low expectations – though, very much like the Communist regime, this dish is not good at feeding people. It’s easy to see why the Soviet Union collapsed under Gorbachev: fundamental economic weaknesses exacerbated by Perestroika, which in turn contributed to the growth of nationalism in the republics. Well, that’s the conventional view – but I believe that the biggest culprit was in fact the meat jelly. It wasn’t the flavour which caused the USSR to unravel, instead it was the very concept of meat in a jelly. Any regime under which that is considered a meal for a special occasion is doomed to fall, with Soviet citizens looking to Western capitalism for fashion, music, and food which didn’t wobble. 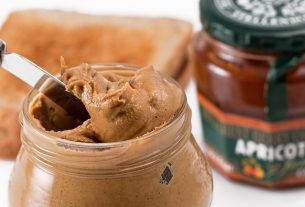 The History of Peanut Butter

the ingestigator: Fire and Stone