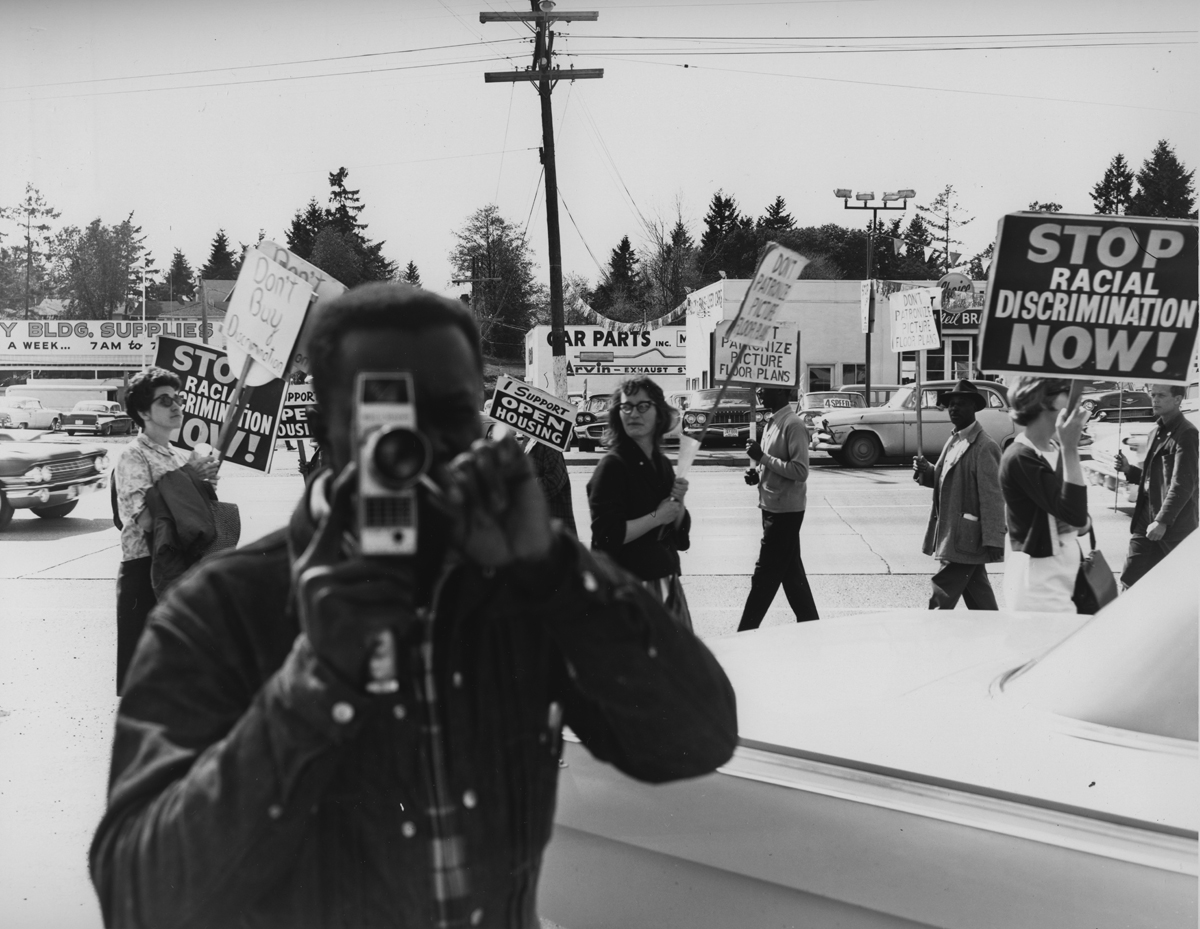 Recently, as digital photography has become better quality and developed to look more and more like its analogue counterpart, an idea has formed: that the clearer and the higher the resolution of the image we are being shown is, the more reflective of reality it is. Thus, a hierarchy of good versus bad images has established itself in our culture. This bad or ‘poor image’ is what artist Hito Steyerl describes as the “lumpen proletariat in the class society of appearances, ranked and valued according to its resolution.”

However, in the last few years, it is this blurred, shaky and pixelated image, resulting from the rise of the smartphone, that has become the most powerful. It could be seen as the truest and most compelling way of reflecting reality. The hand-held is used as a device in film and television to convey a sense of realism, or ‘documentary’ style film-making: think The Office or The Blair Witch Project. Why is it that the shaking hand or the blurred image make a video seem more ‘real’ and believable? A high-resolution image may look mimetic and true to reality, but maybe it is not.

The mobile camera and hand-held civilian footage has become a powerful tool for rebellion against state apparatus. This is something the artist Rabih Mroué has called “the pixelated revolution”. The unstable image has become a form of rebellion against the hegemony of the ‘stable image’ which has been hijacked by institutions in power. As people around the world have used hand-held footage to film acts of government wrongdoing, taken on whatever device they have on them, we have come to trust and believe the truth-telling ability of these civilian camera images over ‘stable’ images portrayed by media outlets or governmental institutions. Poor images, for example the pixelated jpeg, are often those not regulated by authority.

Therefore, they can be shared throughout the internet and destabilise the hierarchical relationships of what makes ‘good’ photograph, becoming a form of protest. For example, think of the numerous films of black men in America being shot by state police or those haunting images of the Grenfell Tower fire  erupting, filmed by neighbours and residents and shared through various online platforms. It is not just in the West that this is taking place, around the world people are getting out their phones and starting a global revolution though filming the attrocities in world around them.

In Mroué’s video/lecture work The Pixelated Revolution (2012), he discusses the ongoing Syrian Revolution and talks about how “Syrian protesters are filming their own deaths” on their mobiles. Mroué informs us about the practice of ‘double shooting’ where two people shoot at one another, one person with a camera, and the other with a rifle; “one shoots for his life and the other for the life of his regime”. In the video, he analyses real-life mobile footage of Syrian civilians being shot at and discusses how these people, but more namely their camera lenses, have become targets, because the poor, low resolution images they create have become the enemies of the regime. They are fighting a war of images.

By ‘stable image’ I refer to the institutionalized video portrayals of events filmed from an unmoving, singular point of view, like one of a camera mounted on a tripod or of satellite imagery. These unmoving perspectives have become a symbol of governmental power and untruths. Mroué in The Pixelated Revolution described how “the stability of the tripod” has come to be synonymous with “the intention of the state to remain in power”. The tripod stabilises the cameras and automatic weapons of the establishment and the official channels’ reliance on the tripod undoubtedly figures as a reminder that the solidity of the state is unquestionable and its image uncontaminated and unshakable. These unshaking images of the state are most likely fabricated and to be fought against. The shaking images of civilian photography form a defiance against this. The low resolution ‘poor image’ often originates outside of regulated systems and is the true reflection of reality.

Though what we see in the shaking image on film is often unclear, maybe showing an ill-defined sense of reality, it is a undoubtedly truer reality than the stable one. How can a war or rioting be portayed as stable when it so changeable and unclear? The unstable image also holds a claim to truth due to us feeling the real presence of the person holding the lens. We feel each person’s hand shaking as they navigate their surroundings.

Today, most of us would freely admit that we are addicted to our phones and as such they have become like an extension of our bodies. Our phones go with us everywhere, and as such, we have the power to record and capture any chance event that happens around us. The hand-held becomes like prosthesis, an extension of the eye and hand as it follows the filmer’s movements. Artist Charlotte Prodger considered her mobile phone camera as an extension of her nervous system, it is a way of conveying a true reflection of human experience. The stable film indicates no human agency, it is mechanical, so it is untrue of real life.

The instability of hand-held footage reflects the instability of the time we live in. After the 2008 crash and the rise of the internet, we are in what artist Hito Steyerl calls “a state of freefall” in which our sense and perspective of reality is shifting and unstable. This freefall is due to our fading concept of a ‘stable horizon’: “Our sense of spatial and temporal orientation has changed dramatically in recent years, prompted by new technologies of surveillance, tracking, and targeting. One of the symptoms of this transformation is the growing importance of aerial views: overviews, Google Map views, satellite views. We are growing increasingly accustomed to what used to be called a God’s-eye view”.

Photographic ‘stable’ images like this God’s-eye view can be subjective and hierarchical. They are easy to stage and reproduce, showing things as they appear but not as they are. Jerry Thompson in The Embodied Self sums this up nicely: “rather than an embodiment of some absolute objective record of things as they are, the photograph is a view, a view taken from a single point in space – a point of view”. This is important when looking at the stable versus unstable image. The tripod is simply pointing at a subject, whereas the hand-held is looking more in-depth. The hand-held lens, due to it being an extension of the self, moves with the filmer/viewer it follows the eyes movement, seeing from multiple perspectives. As the playwright Berthold Brecht said, “less than ever does the mere reflection of reality reveal anything about reality”. And so, for an image to be a true reflection of reality it cannot just show a clear, stable, high resolution image of something ‘real’ but must move beyond it, showing the wavering and changing nature of the world we live in.

Walter Benjamin said that the nature of reality can only truly be shown through “constructing” it, so to show true reality you need to theoretically create new one. We need to see what is going on outside the frame of view. “Supplementing the photograph with montage and captions cuts into its mirroring of surface reality to produce something constructive”. In her essay ‘In Free Fall: A Thought Experiment on Vertical Perspective’, Hito Steyerl described montage as the “perfect device for destabilizing the observer’s perspective and breaking down linear time”. In today’s present, due to the incredible digital archive that we have access to, we do not live in a system of ‘linear time’ but one where we can search and relive many pasts at any time we want to.

Some may argue that the ‘poor’, unstable or pixelated image is difficult to read, as it shows a scattered point of view and therefore it is useless. However, through the use of montage to disrupt the singular, it becomes very powerful and can enact real change.

Forensic Architecture, whose work is currently on show in the Turner Prize exhibition at Tate Britain, are a perfect example of a group working towards this. The multidisciplinary artist/activist group take these hand-held shaking images taken by civilians and stabilse and recontectualise them, making them part of a larger investigative enquiry. For example, they are currently gathering people’s footage shot of Grenfell Tower whilst it was on fire to explore what really happened. Through combining these videos with those from media outlets, government sources, their own architectural reproductions, as well as phone calls that took place at the time, they can build an accurate digital timeline to get a well rounded view of what actually happened that day. This may well result in new insights into the disaster, as has happened with many other of their investigations.

So, this is the pixelated revolution, where each and every one of us have the power to change government narratives of events and inform others of injustices through the power of the tiny little camera on the back of our phone. Satellite and news footage may tell one story but the hand-held has the power to tell an entirely new one.

Peterson carried through by subtle acting