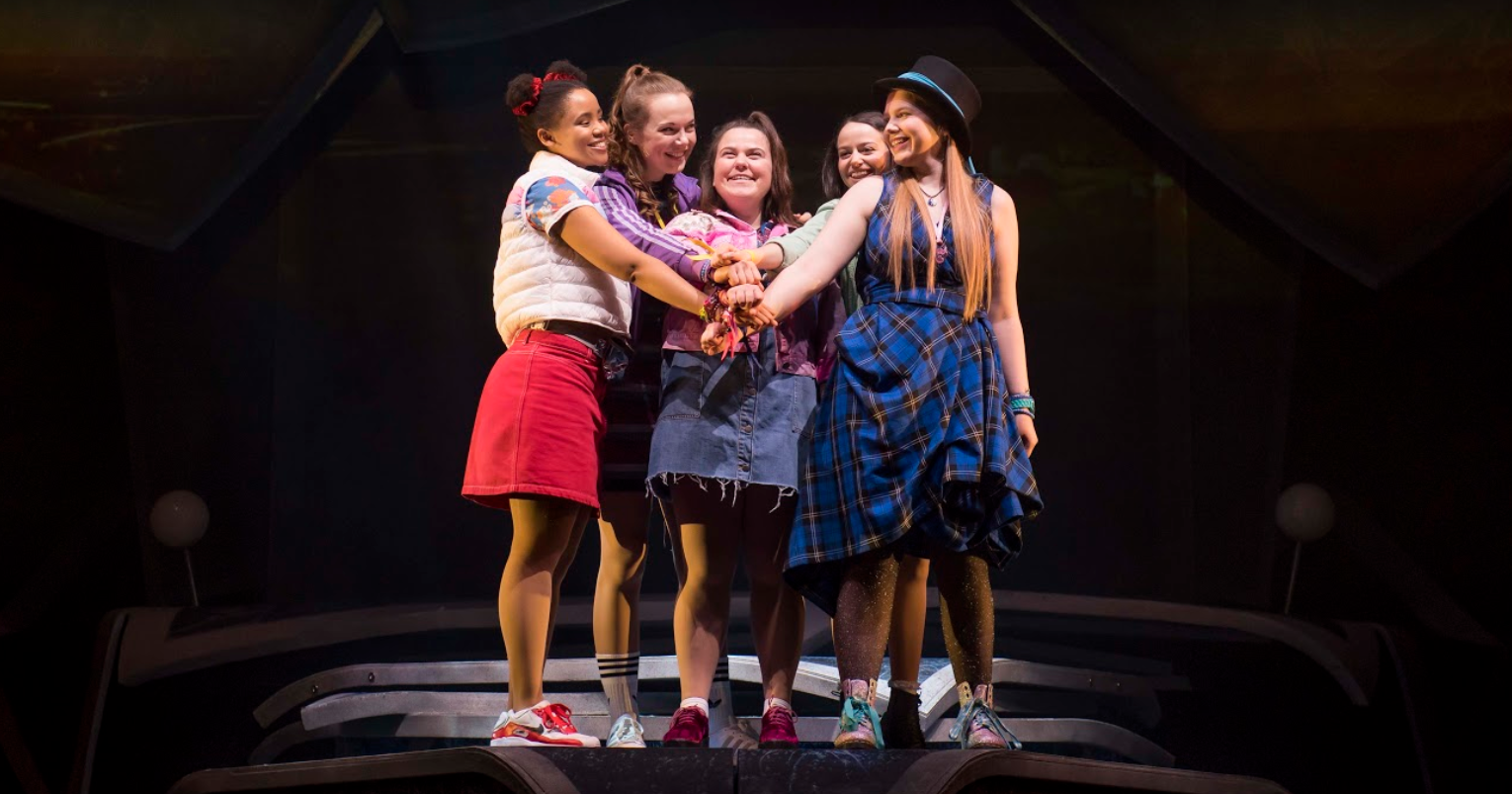 Jukebox musicals, the idea of incorporating the music of an artist or a band into a show, has had a lot of success, from Mamma Mia to The Jersey Boys. However, The Band, using the music of Take That, is unlike these others, offering a new and exciting twist on this method of writing. The musical does not follow the life of the well-loved Take That members nor does it use their songs as plot devices, as in Mamma Mia. Rather, it explores a group of friend’s love for the music, their fangirling and their friendship. It offers us something that all audience members can relate to, our love of the music we grew up on and the way it impacted our lives. The closeness felt between a fan and their artist is shown in the play by Band members literally bursting out of cupboards, school lockers and other sceneries. The Band in a light-hearted and amusing way highlights what it is to be a music fan and how it can reinforce friendships.

‘The Band’ that features in the musical, having won Let it Shine in 2017, consists of AJ, Curtis, Nick, Sario and Yazdan. Being a band in their own right ensures a genuine fluidity and chemistry between the members which certainly was enjoyed by the audience. Their performances encouraged singing from the auditorium, dancing in the seats and the waving of lighters – well, phone flashlights. The finale gets everyone onto their feet, dancing along to ‘Shine’ and all the other well-loved Take That songs. Such interactive theatre gives the feeling of a concert, reminding us, once again, of our love of music. What this also offers is an untraditional musical and therefore one which is appealing to many who may not conventionally be a musical fan – for who doesn’t love Take That?

The ability to recognise oneself in their relationships, in having friends you can be crazy with, is one part of the show that makes it so enjoyable…

This doesn’t mean the show doesn’t have emotional moments, and one of the most touching points of the show is ‘Back for Good’, sung by all the friends as their younger and older selves. The teenagers apologise for what they said and did and the adults ask to be taken back to their younger selves. The direction here is especially great, with interaction between the different generations of themselves and with each character having a colour associated with them. Such poignancy adds to the genuine feeling behind the women’s friendship – another great part of the show. The performance of relatable female friendship, with moments of them discussing which band member they were going to marry, is all very identifiable for anyone who has ever loved a boy band. The ability to recognise oneself in their relationships, in having friends you can be crazy with, is one part of the show that makes it so enjoyable. Such joy in their friendship means there aren’t many scenes lacking in smiles or laughter in the audience.

The Band cements the fact that boy bands will be loved through all ages, from The Beatles to Take That to One Direction and who knows, maybe ‘The Band’ Five to Five – Aj, Nick, Curtis, Yazden and Sario. This show is a nostalgic blend of the best Take That hits and the ‘90s, with the audience relating to the feeling of being in love with a boy band and the impact of music as you grow up. The writer Tim Firth states that music “makes time travellers of us all”, and it is true that music can transport us to a different place. When you watch The Band you are once again fifteen, listening to your favourite music and living in the ‘90s.